Close encounters at the commissary 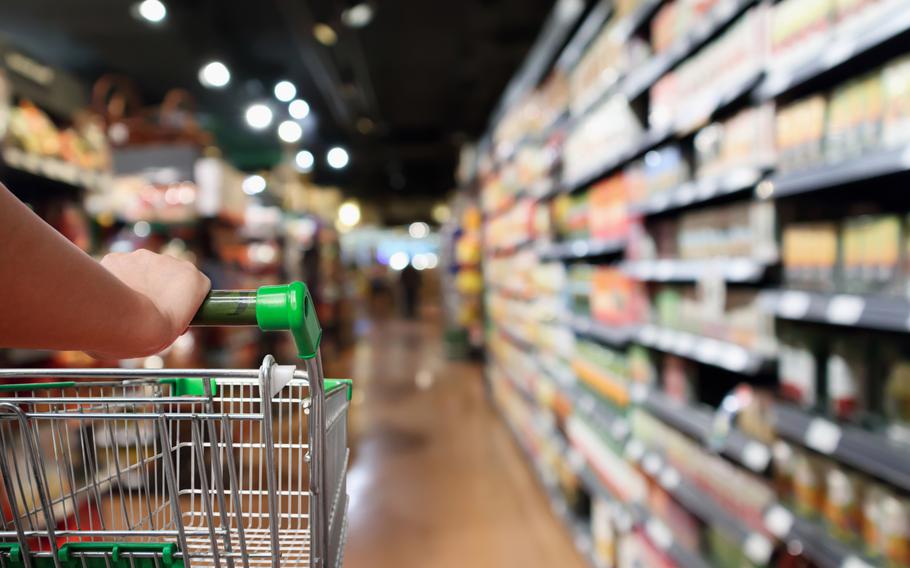 I scurried through the commissary doors and out of the rain, grabbing the last small cart in the vestibule. I preferred the smaller, more maneuverable carts, but as my luck would have it, this one had a wheel that screeched every fourth rotation like a cornered rat. Muttering discontentedly to myself, I dug in my purse for my grocery list, which I found torn and crumpled at the bottom. It was one of those days.

My temperamental bladder urged me to stop at the ladies room before beginning my lonely sojourn through the commissary aisles. At the mirrors, I noted that my hair was protesting the humidity by imitating a dirty, wet mop. I tried to spruce it up with a brush from my purse, which only made it frizzy.

Retrieving my squeaky cart, I resolved to complete the task at hand, but in the produce section, the bananas were too ripe, the avocados were too hard, and I couldn’t for the life of me figure out which end of the bags opened.

I moved on to the meat coolers against the back wall, where cellophane-wrapped beef, pork and poultry parts lay out on display. Seeing slabs of oozing red steak and swollen mounds of hamburger meat reminded me of the painful throb in my gut. Retrieving a pen from my purse, I scribbled “feminine products” on the bottom of my grocery list.

Somewhere in the snack food aisle, I realized I was ravenous. Someone had thoughtfully left a coupon for Pringles on the shelf, which compelled me to throw two cans into my cart. Oreo Thins are so tasty, I recalled while reaching for a bag, especially with ice cream, which I reminded myself to pick up when I got to the freezer section.

Crampy and squeaking, my reject cart and I wheeled our way through the next few aisles, scratching items off the crumpled list, and impulsively adding hormone-induced extras such as frozen pizza bites, Peanut M&Ms and a half-pound block of cheese.

Aisle six contained many necessary goods for a woman of my age. I stooped low to retrieve a humongous canister of orange-flavored fiber laxative powder. A few feet further, I scanned the bottles of pain relievers, finally selecting maximum strength capsules that would target my womanly symptoms. And finally, I stood before the colorful display of feminine products. Just as I selected a large box that would meet my absorbency needs, it happened.

Shaken from my shopping trance, my eyes darted toward the source of the masculine voice calling my name. “Oh, hey Jerry!” I said to my husband’s former co-worker with a startled tremble that gave a guilty impression. “I’m just fine … uh, how are you these days? I heard you got married, huh?”

As we exchanged the kind of idle chitchat that one does at the commissary, Jerry’s eyes naturally glanced at the shelves beside us, at the large box in my hands, and down into my cart at an array of products and foodstuffs that told my personal and very private story. Although he had stumbled into this innocent interaction unknowingly, I could see that he felt as awkward as I did.

I resisted the impulse to run and hide behind a nearby display of shoe inserts, and quickly brought the conversation to a friendly conclusion. “It’s been great to see you, Jerry. You and Francis really need to catch up!”

Breathing a sigh of relief, I shoved my misfit cart, which now seemed to be whimpering, forward, determined to snag my last few items and get the hell outta there. However, our mutual suffering continued when Jerry and I ran into each other again in front of the dog food, at the deli and in the check =out line, where I was forced to reveal my embarrassing items again on the conveyor belt for the world to inspect and judge.

Teetering precariously on the threshold of hell, I overtipped the bagger, snatched a can of Pringles for the car ride home and careened out of the parking lot as fast as the base speed limit would allow.