The secret is out: Bowling league source of career inspiration 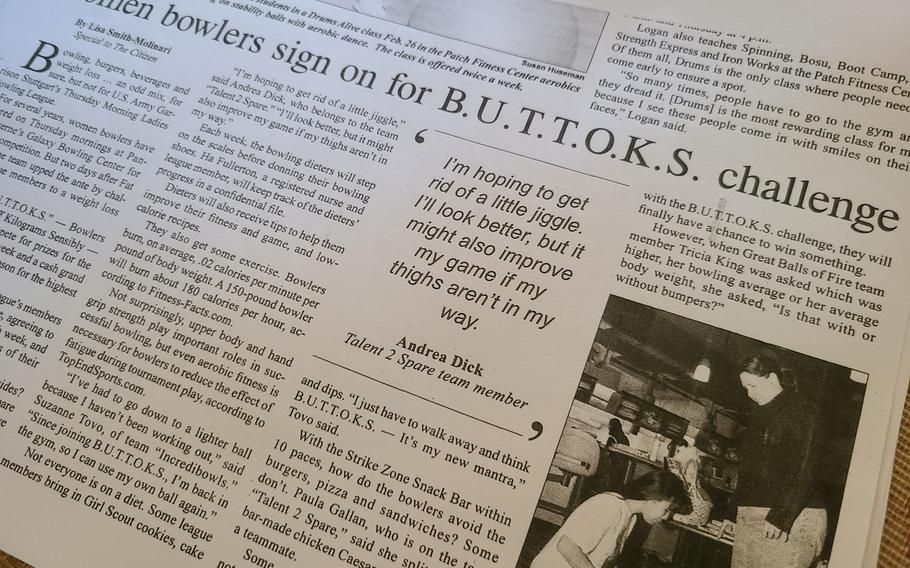 I’ve been telling a lie for 20 years, and it’s finally time to come clean. On my office wall, there’s a framed clipping of an essay I wrote about marriage that appeared in The Washington Post in 2010. It was the first thing I ever published … or at least that’s what I’ve been telling everyone.

Truth be told, I’d published before. But those facts aren’t as glamorous as the story about launching my column-writing career after authoring an essay for a huge international publication. So, for the past two decades, I’ve been lying about it.

But now, in honor of National Bowling Day (Aug. 13), I’m telling the real story about how I became a military spouse columnist. Prepare for the dull, mundane, unremarkable truth.

It all started when our military family was stationed in Stuttgart, Germany. I was going through my pathetic post-move will-you-be-my-friend stage. Sensing my desperation, an Army wife approached me in our neighborhood on Patch Barracks and asked if I’d join her bowling team. As a Navy wife, I wasn’t familiar with Army spouses’ bowling leagues, but I would’ve joined a naked bobsled team if it meant I’d make new friends.

With no bowling knowledge whatsoever, I wrote a check for the league membership fee and joined the team “Great Balls of Fire.” However, I soon found out that the mostly-Army wives league members did not take kindly to Navy wives intending to sit around and chit-chat at the bowling alley. Unfortunately, they actually wanted me to bowl … competitively.

For the first few months, I tried my best, but just couldn’t improve my abysmal bowling skills. What else could I do to win the approval of league members, I wondered?

One week, I showed up with an idea and told my teammates. “You know how we’re always complaining about packing on pounds from all this heavy German food? And we sit here each week eating nachos and pizza? Well, I have a fun idea for a league-wide weight-loss competition! Everybody’s gonna love it!”

The following week, I announced my new weight-loss contest, which I had cleverly dubbed “B.U.T.T.O.K.S” (Bowlers United To Take Off Kilograms Sensibly) to the league. The plan was simple. My teammate, a registered nurse, would bring a scale and confidentially record and track competitors’ weights. Each week, and at the end of the season, weight loss winners would receive prizes. Genius!

I thought the league would hail me as “creative,” “witty” and “fun-loving,” but I was met with blank stares, defensive scowls and shaking heads. Now, I was not only a bad bowler, I had just insulted the entire league by implying they all needed to diet.

Too late to turn back, I lobbied a few league members to join the challenge and carried on, bringing healthy recipes each week, and issuing prizes for those who lost pounds.

One month into the contest, I spawned another “brilliant” idea. I’d pitch a story to the base newspaper — The Stuttgart Citizen — about our bowling league diet competition, ill-fated as it was. Desperate for content, they agreed, and soon, my first feature appeared with the headline “Women bowlers sign on for B.U.T.T.O.K.S. challenge.”

I’d like to think that the lady bowlers were awed by my mastery of media and my bright future as a journalist, but alas, they were unimpressed. However, the piece did cause excited chatter among the league ladies, who enjoyed reading about themselves in The Citizen between bowling turns.

At the end-of-season banquet, I distributed grand prizes to the B.U.T.T.O.K.S. winners while others looked on resentfully. My plan to find my friend group in the bowling league had backfired; however, writing for the tiny base newspaper (not The Washington Post) is in fact what originally inspired me to become a columnist.

I offer this confession on National Bowling Day to clear my conscience, but while we’re getting real, I’ll also concede that no matter how many columns I’m inspired to write, the Spouses’ Bowling League will never forgive me.