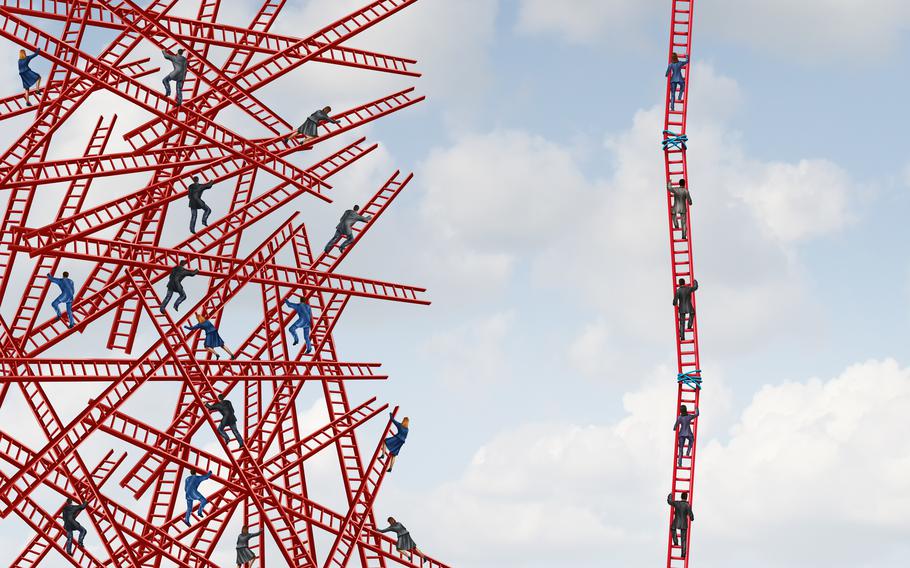 The career path for military spouses is rarely straight, and often not even possible. (iStock)

I sometimes feel disconnected from military spouses, since my husband retired from the Navy five years ago. As a veteran spouse, I no longer endure PCS moves and deployments, which are cornerstones of active-duty life, affecting everything from children’s education to mental well-being, to finances and marriage. Now, when I write about these issues, I research what today’s active-duty spouses go through.

However, there is one milspouse matter that affected me in such a profound way, my life has been forever changed — The military spouse unemployment problem.

Simply put, marrying a Navy man killed my career as an attorney. I tried to keep it alive for many years by getting two licenses, faithfully reading legal reviews, paying my student loans and bar dues and taking part-time research jobs. One year, I mustered the courage to ask the local DA if he’d allow me to volunteer at his office while I studied for the Virginia bar exam. As milspouse luck would have it, that was the same month my husband informed me he was deploying for a year. When he got home, we moved overseas.

The life support plug got pulled, and my litigation career took its last breath.

Stories like mine are powerful proof that the military spouse unemployment rate, which has stubbornly stagnated at 22% (seven times the national average) for more than a decade, is a crisis. Milspouse unemployment and underemployment contributes significantly to force retention, financial stresses and a host of other military concerns. However, the National Military Spouse Network (NMSN) has released its 2022 White Paper, “The Military Spouse Employment Dilemma: The Multi-Million Dollar Question That No One Is Asking ... Until Now”, indicating that, despite an abundance of anecdotal evidence, there is a “lack of urgency” among military leaders and politicians to effect true change.

The Paper contains a chart outlining 16 federal programs, initiatives and hiring incentives addressing military spouse unemployment. However, data shows these programs have been ineffective. Although they help spouses find employment, spouses often can’t retain those jobs through subsequent PCS moves, making them less likely to advance and qualify for retirement benefits. “In the past, just finding a spouse any job was the problem. Now, it’s finding a spouse a career they can grow and keep,” the Paper explains.

Clearly, anecdotal evidence is not enough. “If we are brave enough to share our stories, then we should be bold enough to offer solutions,” Sue Hoppin, Air Force veteran spouse and founder and president of NMSN, told me in a recent interview. Although Sue has seen a sincere willingness on Capitol Hill to listen to spouses’ unemployment stories in recent years, she said they won’t act unless military spouses offer answers. “It’s our responsibility,” Sue explained.

“NMSN started publishing White Papers [in 2019] to provide solutions, one of which has been signed into law. Together, we’ve figured out how to be more strategic about military spouse unemployment issues,” Sue said.

I asked about Sue’s own career path. A well-educated daughter of a USAID contractor, Sue aspired to attend law school and pursue her own diplomatic goals. “But then, I met my Air Force husband,” she said, soon finding herself a stay-at-home military mom on McConnell Air Force Base in Wichita, Kan.

Volunteering offered Sue work with paid child care, but she struggled to find meaningful employment after each move. After attending graduate school, Sue thought her impressive education, volunteer experiences and fluency in several languages would finally land her a good job. “No one really cared,” she said, telling the all-too-familiar tale of military spouse unemployment. Fortunately, Sue found her calling in 2010, when she founded NMSN.

Ever diplomatic, Sue concluded, “We can’t just share our problems, we have to offer our leaders opportunities to help us.” Undiplomatically, I say, our leaders better take action, or they can take their lip service and kiss my milspouse bottom line.