Skiing while married can be a slippery slope 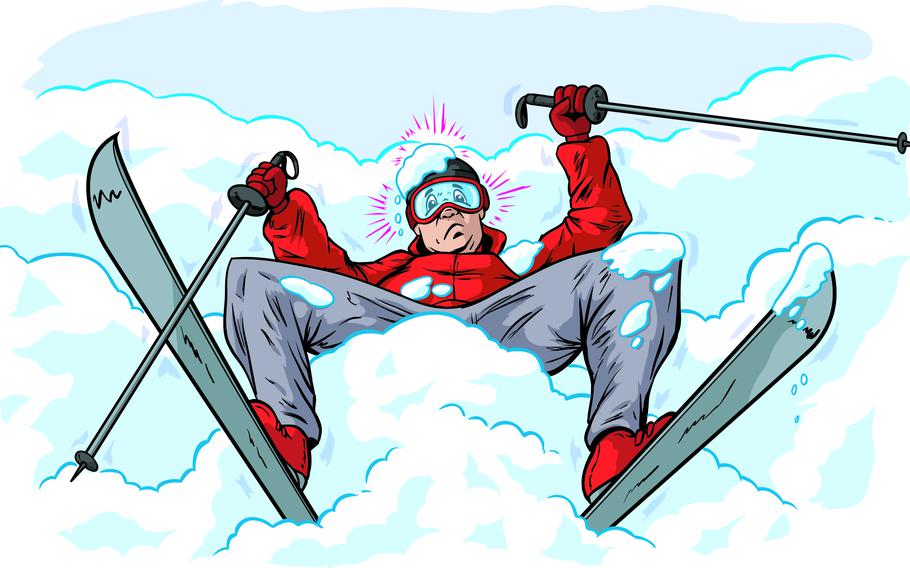 After 25 years of marriage, I know that relationships are tested.

Power struggles surface during unexpected moments. Every couple has their triggers, and ours include debates over which way the toilet paper roll should hang, who touched the thermostat last and what constitutes junk mail.

For my husband, Francis, and me, there is one event that launches us into a passive-aggressive battle of wills like no other. It happens infrequently, but when it does, it causes palpable tension that leaves us both leafing through the yellow pages for a good attorney, just in case.

That event is skiing.

A recreational sport intended to provide positive family memories and adrenaline-fueled euphoria, skiing actually sends us to the brink of divorce.

Our mismatched perceptions of skiing started in our respective childhoods. Francis was forced to take ski lessons with his brothers one winter in the 1970s. The cold, scratchy wool, paralyzingly stiff boots and bafflingly complicated bindings caused irreparable childhood trauma from which Francis never recovered. His only salvation was the promised Styrofoam cup of hot cocoa he got to drink in the station wagon ride home.

Conversely, I had countless fun experiences in high school Ski Club, when my best friend and I would sneak sips of peppermint schnapps from Bota bags and lie to cute boys on the chair lifts, telling them our names were “Brooke Townsend” and “Claire Taylor” and that we went to boarding school in Massachusetts.

Our family’s ill-fated foray into skiing began after our move to Germany. In full denial that my family had no interest in skiing, I signed us up for Patch Barracks Ski Club, determined to drag my family through our European ski adventure.

The charade did not last long. On our first trip to the German Alps, our youngest barfed on the gondola, our son caused a pileup on the t-bar, our middle child was in tears, and Francis projected the bitter resentments of his traumatic childhood skiing experiences by encouraging the kids to treat me as the primary source of their discontent. The day ended abruptly when I led everyone onto a long intermediate trail from which there was no escape. It spit us out onto a steep slope that sent Francis into a freefall not unlike the infamous “agony of defeat” footage on ABC’s Wide World of Sports.

Two PCS moves later, friends invited our family to their ski place in New Hampshire. As soon as I accepted the invitation, a power struggle ensued. Francis was prepared to hate every minute of it - the cold, the inconvenience, the expense - and to hold me personally responsible for his annoyance. And without realizing it, I launched my own propaganda campaign to convince him that skiing is fun.

While Francis remained stubbornly skeptical, I was determined to sugarcoat our experience. However, I needed a Ph.D. in economics to get the best deal on lift tickets, eight arms to rent the equipment, the patience of Job to keep everyone happy, a second mortgage on our house to pay for it and acting lessons in how to grin and bear it.

Inevitably, there was no hiding the truth. By the time we arrived at the resort, the tension emanating from Francis was palpable. In the locker room, it took two of us bracing against the lockers to snap Francis’ boot buckles shut only to do it all over again when he claimed that a wrinkle in his sock was causing unbearable pain.

By some miracle of God, we all managed to put on our equipment and make it onto the chairlift. Sweaty and winded, I realized that Francis was right - skiing is an inconvenient sport. After a few runs, I conceded defeat and left Francis alone, fully expecting him to head straight for the lodge. Hours later, I ran into him on the slopes. He’d actually been skiing all afternoon, without hot cocoa. “You up for another run?” he asked from behind his balaclava.

“Heck yeah,” I smiled, slotting into the lift line with him.

On the chairlift, I leaned in for a frosty kiss, realizing that our power struggle had peaked, and it was all downhill from there.