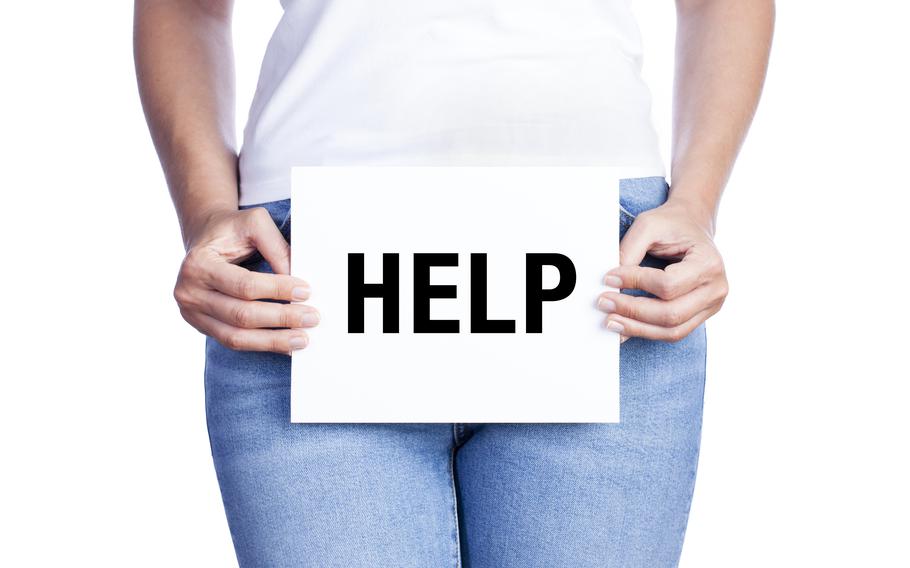 The travel mug’s worth of coffee I’d consumed that morning hit my bladder with the force of a runaway train, making me squirm in the commissary checkout line. Grabbing items from my cart and tossing them onto the conveyer belt, I huffed rhythmically under my mask as if I was having birthing contractions until the urge passed.

It subsided long enough for me to get home, but struck again as I was carrying grocery bags in from the car. Although the bread got squished when I dropped bags in our front hallway, I made it to the bathroom with only minor spillage.

After doing a bit of “accident abatement” in the bathroom sink, I put on a fresh pair of undies and threw my spot-rinsed pants into the dryer. “No harm, no foul,” I thought, proud of my ability to adapt to life’s little challenges.

Pants-less, but still wearing socks and shoes, I descended the basement stairs to stash groceries into our second refrigerator. As I was loading potatoes into the crisper, the doorbell rang.

Thankfully, I heard my husband, Francis, walk down our creaky staircase from his home office and open the door. “Hey John, c’mon in! You don’t mind dogs, do you?” Then I remembered - John was here to appraise our house … including the basement. My eyes darted around the dank, subterranean space under our 125-year-old home for a place to hide.

This was not the only time I’d found myself in a predicament due to my “droopy bladder.” Doctors at every military clinic where we had lived had told me that my bladder issues were the result of giving birth to three large babies, including two nine-pounders. Apparently, my bladder wasn’t where it used to be, and the doctors recommended surgery. But who has time for surgery? Who will cook, clean, run errands, drive kids, walk dogs, shovel snow and buy groceries at the commissary? As a long-time military spouse, I was conditioned to believe that my job was to manage the household, without vacations or medical leave. It was part of the bargain I made when I married a career military man.

When Francis was on active duty, I had to do what it took to manage our family, whether he was home or away. That meant that, if I got sick while he was deployed, and felt the urge to throw up while driving the kids in heavy traffic down I-264, I’d better reach around and grab that empty Big Gulp cup on the floor of the minivan. (Yes, that really happened.) Subconsciously, I believed it would be selfish of me to turn away from the needs of my family for a long period of time to address minor health issues, droopy bladders included.

After deciding against climbing into a dusty storage bin containing old Halloween decorations, I cleared my throat and called, “Francis? Honey? Could you come to the top of the basement stairs for just a sec?”

Francis looked down at me with initial shock, then giggled knowingly. Using hand gestures and exaggerated facial expressions as if playing charades, I commanded him to get my pants from the dryer and throw them down to me before John the appraiser was traumatized by the sight of my bare, flaky winter legs topped by Warner briefs.

Disaster may have been averted, but the incident prompted me to self-reflect. Military spouses serve their families, which is honorable. They put aside careers, personal goals and sometimes physical and mental health issues to manage the family while their spouse serves the country. But a time may come when they should make themselves a priority. We are conditioned to feel selfish if we put ourselves first, but we must strike a reasonable balance between our needs and our duty to our military family.

As I turned out the basement light, now fully clothed, a switch flipped in my thinking. In the New Year, I would make myself a priority. I won’t be left standing pants-less in the basement again — I will resolve to take care of myself now.