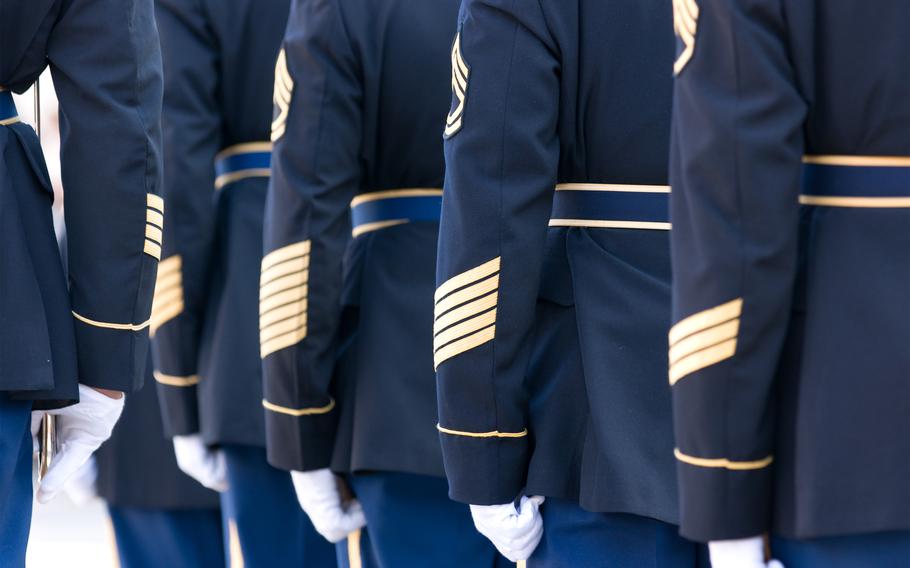 The pomp and circumstance of military celebrations represents the ups and downs, but ultimately the net positive, of life in the military. (iStock)

I’m a hopeless idealist. This may sound like a humble-brag, but this particular personality trait can be a burden. I tend to have unrealistic expectations for myself, places, things and humanity in general. So, when reality hits, I’m often disappointed.

As soon as an idea pops into my head, I begin visualizing. When it finally materializes before me, my active imagination has already built it up into something fanciful. And I’m left to cope with reality.

For instance, when our family received orders to England, I imagined us living in a 17th century thatched roof cottage surrounded by blackberry brambles and honeybees, à la Peter Rabbit. Instead, we spent two months holed up in dreary RAF Molesworth base lodging watching cooking shows on AFN. We eventually moved into a charming village; however, my storybook fantasy was dashed every time I faced life’s eventualities: Mad Cow Disease warnings, male strippers at the local pub, the English penchant for instant coffee, my otherwise pretty English neighbor’s rotten front tooth.

Years later, when my husband, Francis, went on a yearlong deployment, I imagined myself dressing the kids up in red, white and blue, and waving tearfully from the pier as his ship departed, the band onboard playing “Anchors Aweigh.” Instead, we kissed goodbye next to a bagel kiosk at the Norfolk Airport before he disappeared into the security screening line with a plastic baggie of toothpaste and shampoo.

When we PCSed to Germany, I planned frequent travel trips so our kids could experience Europe. Despite many incredible destinations, I focused on the imperfections marring my fantasies. Garbage floating in Venetian waterways. A McDonalds on the Champs Élysées. A “Made in China” sticker on a Tuscan souvenir. A German man scolding me for a bad parking job. Admitting that the expensive cheese we bought in Belgium smells too weird to actually eat.

After many years of unfulfilled expectations, my tendency to idealize turned into susceptibility to self-doubt My mind was not to be trusted. If I felt really good about someone or something, I must be wrong, I thought.

Recently, a friend’s young-adult daughter was seeking my perspective as a longtime military spouse. Her best friend was dating a West Point grad with two years left of his active-duty service commitment to the Army. “They’ve been dating long-distance for about a year, and she thinks he should get out. He wants to go special ops, but she doesn’t want to move away from her family and friends, only to be left alone when he deploys.”

Instinct kicked in, and I blurted, “Your friend sees her boyfriend’s military service as a threat to her familiar world, but she has no idea what military life has to offer.” In rapid-fire succession, I rattled off the many reasons I’ve loved military life. “There’s adventure ... bonding between military spouses ... pomp, circumstance, honor and patriotism ... strength and resilience from being challenged ... a sense of true belonging and community ... unparalleled camaraderie.” I went on and on until I ran out of breath.

The next day, I was getting ready for our town’s Veterans Day ceremony, when my self-doubt crept in. “Did I give someone really bad advice because I’m too idealistic?” I wondered. “Is my vision of military life a self-justifying, starry-eyed cover for the harsh realities experienced by those who serve?”

At our town’s Memorial Park, Francis joined the group of vets behind the podium, each one garbed in mementos of their military days. “My experience in the service has proven to be incredibly significant in my life,” a 70-something vet said into the microphone. A band played “Eternal Father, Strong to Save”, flowers were floated in the bay, riflemen shot a salute, 100 flags waved, and little old ladies wiped away tears.

My instincts were right. When it comes to military life, I’m no idealist. My heartfelt pride in our 28-year military marriage are borne, not of unrealistic expectations, but of real-world experiences. Despite the inevitable moments of inconvenience, hardship and disappointment that come with military service, I’ll always be thankful for having been a military spouse.