by
Lisa Smith Molinari
• Special to Stars and Stripes • October 8, 2021 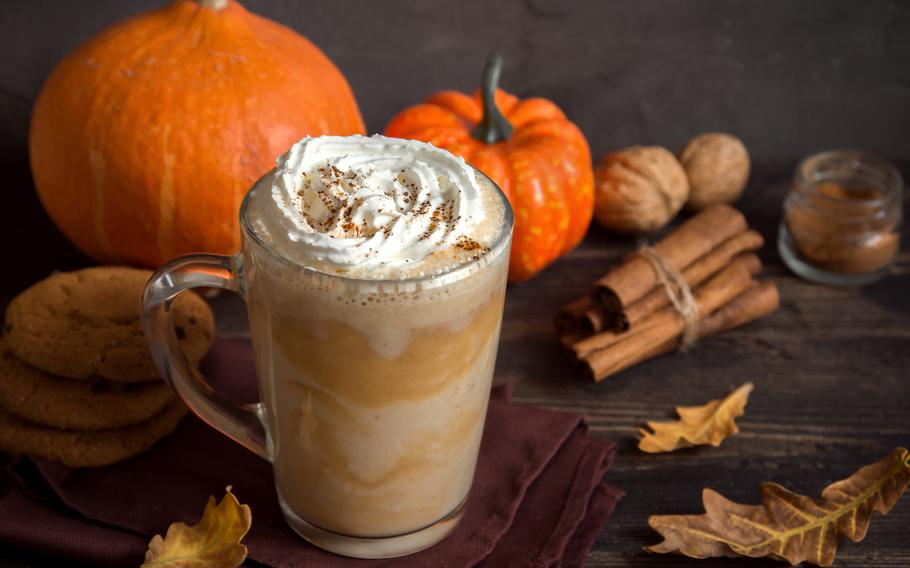 Let’s take a quick trip back in time, just a few decades ago, to our childhood years ...

It’s the month of October, and the neighborhood is abuzz with anticipation. Houses are decorated with hay bales, corn stalks and gourds. Kids run from school bus stops, unable to resist jumping into neat piles of freshly raked leaves. Black cats skitter past scarecrows made from straw-stuffed flannel shirts and work pants with patches at the knees.

And of course, there are pumpkins. Tall and skinny, short and stout, perfectly round, warty and misshapen. Plucked fresh from local farmers’ fields, or picked from crates in front of grocery stores. Adorning stoops, flower boxes, porches, benches, lawns and stumps. Pumpkins are our most essential and ubiquitous seasonal symbol.

With one notable exception — pumpkin pie, which really doesn’t count because it’s made with processed and spiced mush from a can — pumpkins are only meant for decorating, carving and smashing. Certainly, no one would ever eat pumpkins, or God forbid flavor their coffee with them. Squash-flavored beverages? What’s next, kale salad? Blech!

Sure, we may fish a few slippery seeds out of pumpkins’ open cavities for roasting and salting, but there is no possibility that anyone will make palatable food out of the stringy, slimy pulp of this oversized species of winter vegetation.

Pumpkins might be homely, but they aspire to loftier goals than soup. They mingle modestly with gourds in seasonal displays, but make no mistake about it. On Halloween, pumpkins willingly take center stage, becoming the stars of the show. As soon as Mom says it’s time to surgically transform them with sharpened knives — carefully gutting, scraping and whittling their thick meat into exaggerated personifications — pumpkins courageously report for duty as Jack-o’-lanterns, keeping watch at every house with a spooky orange glow.

Then, after the kids have removed their Casper masks, gorged themselves on Laffy Taffy and fallen into a sticky slumber, our brave pumpkins must face their mortality. In the days following Halloween, will they shrivel in the sun, only to be tossed, soft and gnatty, into trash bins on garbage day? Or will they be assaulted in the night and die dramatic deaths at the hands (or feet) of smashing hooligans, the same vandals who toilet-papered the neighbors’ houses during trick-or-treating?

Regardless of our pumpkins’ final fates, we can all agree — they served their singular purpose respectably.

Now, let’s pause our trip down memory lane, and return to the present. It’s October 2021, and somewhere along the way, the pumpkin has become the most exploited vegetable on Earth.

It started innocently enough. In 2003, an executive at Starbucks suggested that a new fall beverage should be added to the company’s seasonal repertoire, which already included winter flavors such as Peppermint Mocha and Eggnog. From the moment the first Starbucks Pumpkin Spice Latte was served through a drive-thru window to a mom in a minivan who just finished her step aerobics class, our lives were forever changed.

Quite suddenly, pumpkins and their traditional spices — nutmeg, cinnamon, cloves, allspice and ginger — were everywhere.

Pumpkins no longer have to wait for Halloween to become the star of the show, because today, pumpkin spice is featured in everything from lasagna noodles to lip balm, Triscuits to toothpaste, Bud Light to bologna, cream cheese to cat litter, car polish to kombucha, cigarillos to Spam, Jell-O shots to shower gel, Pop Tarts to personal lubricants, and everything in between.

It’s unclear why pumpkin went from unpalatable fall decor to consumers’ cultural icon. However, Starbucks has sold more than 424 million pumpkin spiced lattes in the U.S. since 2003, surpassing all the other coffee flavors. Clearly, today’s public loves the essence of the once-humble pumpkin. So much so, they now demand that mustache wax, Cup Noodles, goat cheese, Twinkies, hand sanitizer, hummus, dog chews, cough drops and vodka are produced in pumpkin-inspired varieties.

Those who claimed this was “just a trend" need to shut their pie hole. Clearly, we are in the midst of a Pumpkin renaissance, and we might as well enjoy it.