Mayo the key to a healthier husband 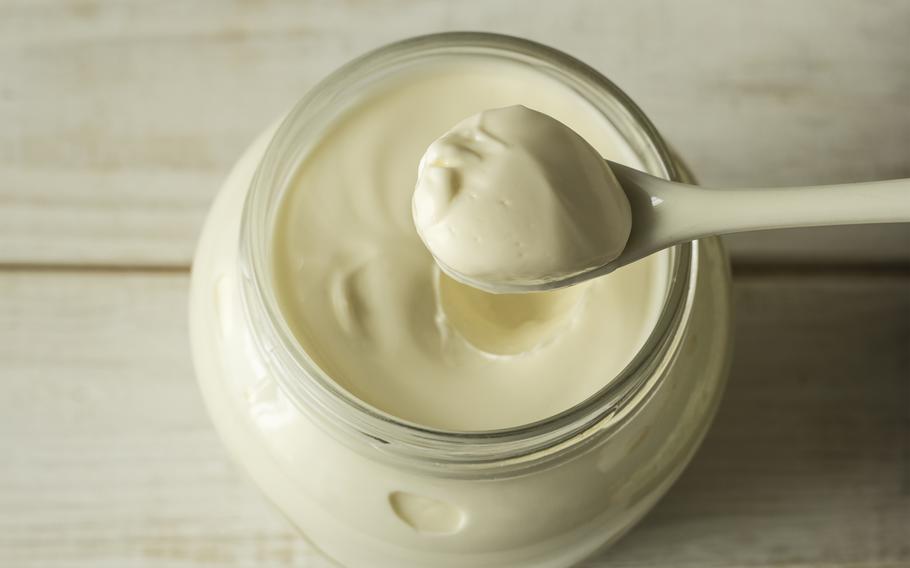 “Where’s the mayo?” our daughter asked recently while standing in front of the open refrigerator doors. I misdirected her to a bin of condiments, and when she couldn’t find it there, I thought we ran out and suggested mustard for her sandwich instead.

“Mayo’s there. Bottom shelf, bang a left at the cheese,” my husband Francis said without looking up from his newspaper. And there it was, a big jar of Hellmans, exactly where he said it would be. If he had been asked to locate a green pepper, almond milk, yogurt, carrots or Brussels sprouts, we’d still be waiting.

When we were dating in the early ‘90s, and Francis showed me his apartment, I recall being amazed at how few food items his kitchen contained. Of course, there was a large jar of mayonnaise in the refrigerator, but it was only accompanied by a bag of onions, a gallon of milk, a bottle of ketchup, a block of Swiss cheese and a package of bologna. Above the fridge sat a massive barrel of pretzels and a loaf of white bread. In the cabinet, nothing but garlic powder, coffee, a dusty can of soup and a box of Shake ’n Bake apparently left there by his old girlfriend.

On the counter sat a lonely toaster, and most unfortunately, his cat Buffoon’s litter box. (Experts say that women shouldn’t try to change their men, but Francis could tell by the horrified look on my face that the cat box on the counter was a potential deal breaker. On my next visit, it had been banished to the bathroom.)

Like many men, Francis has never been a fan of vegetables, especially the nutritious ones. With the exception of corn (heaped in a buttered pile), potatoes (deep fried and accompanied by ketchup, practically a vegetable itself) and onions (which men like in crunchy raw rings that linger on their breath the next day), Francis avoids vegetables unless they are cleverly disguised.

Enter mayonnaise. Husbands may turn their noses up at carrots or cabbage, but when shredded and swimming in heaps of mayonnaise sweetened with a little sugar, these vegetables become a delicacy — creamy cole slaw. I won’t tell Francis that carrots are loaded with vitamin A and beta carotene, and cabbage is an excellent source of vitamin C, a potential turnoff to any man that regularly eats bologna.

After 27 years of marriage, I know how to get Francis to eat his veggies. While I haven’t tried spooning them into his mouth while making airplane noises like I did with our three kids, I’ve learned that steamed broccoli will make its way into Francis’ stomach when slathered with melted cheddar cheese. Green beans become edible when swimming in cream of mushroom soup and topped with crunchy fried onions. Mushrooms must be stuffed with sausage. Peppers must be filled with rice and ground beef. Squash, zucchini, eggplant and spinach are palatable when layered in lasagna with ricotta and mozzarella cheese.

Although Francis’ favorite salad — macaroni — contains no discernible vegetables, I serve him green salads on a regular basis. Keep in mind, however, that these cannot be tossed lightly in balsamic vinaigrette, unless I want Francis to nibble reluctantly at lettuce leaves and push radish slices around his plate. But with unfettered access to a bottle of ranch dressing, he’s game. If I had a nickel for every time I’ve watched him squeeze unmeasured blobs of ranch dressing onto a perfectly healthy salad with an obnoxious “pplllppp, plllpppp, pppplllp” sound…

“Hey Dad,” our daughters have joked, “how about a little salad with that ranch?”

Before I am accused of being an overly judgmental spouse, let me admit that I have my share of unhealthy eating habits: a raging sweet tooth and a penchant for crunchy snacks. As many times as I’ve grimaced at Francis while he gobbles mayonnaise, he’s witnessed me methodically down an entire bag of Fun-Sized Almond Joys in one sitting, or turn a can of Pringles over my open mouth to tap in the last remaining crumbs.

Nobody’s perfect, I guess. And when all else fails, there’s always multivitamins.