Buy Photo
People in the truffle business dress in ceremonial garb to gather before the start of the truffle market in Richerenches, France. (Leah Larkin/Special to Stars and Stripes)

Buy Photo
People in the truffle business dress in ceremonial garb to gather before the start of the truffle market in Richerenches, France. (Leah Larkin/Special to Stars and Stripes) 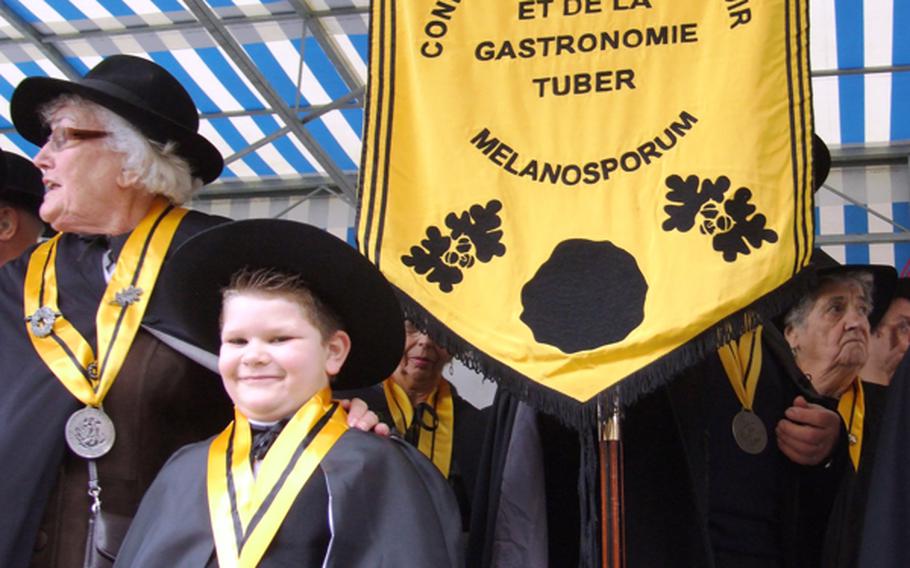 Buy Photo
Even the young can join a truffle Confrerie and participate in the ceremonies. This group was at the opening ceremony of the truffle market in Richerenches. (Leah Larkin/Special to Stars and Stripes) Buy Photo
Truffles are known as black diamonds and fetch a hefty price. At least year's truffle market in Richerenches, France, they sold between 150 euros and 230 euros a kilogram, depending on the quality. (Leah Larkin/Special to Stars and Stripes) 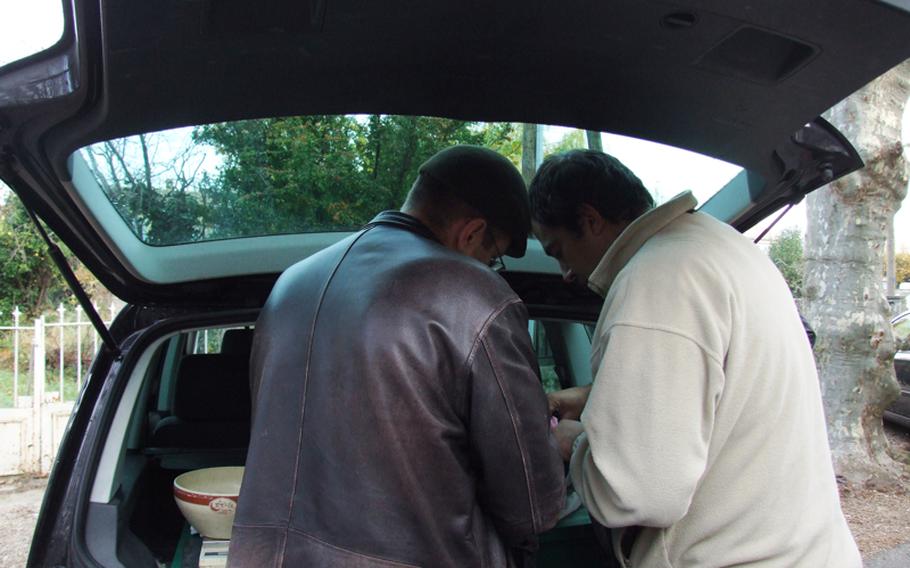 Buy Photo
Selling the black diamonds at a truffle market for professionals is veiled in secrecy, with sellers and buyers crouching under car hoods to inspect the merchandise. They don't like to have their photos taken or to discuss their business with journalist for fear that some of their favorite hunting sites will be revealed. (Leah Larkin/Special to Stars and Stripes) Buy Photo
Truffles are sorted by size and quality. Last year the best quality was selling for up to 230 euros per kilogram. (Leah Larkin/Special to Stars and Stripes) Buy Photo
Christian Allegre congratulates his truffle dog, Chou Chou, after the black Lab sniffed out the site of truffles. Allegre digs up the valuable fungi while Chou Chou goes off in search of more. (Leah Larkin/Special to Stars and Stripes) 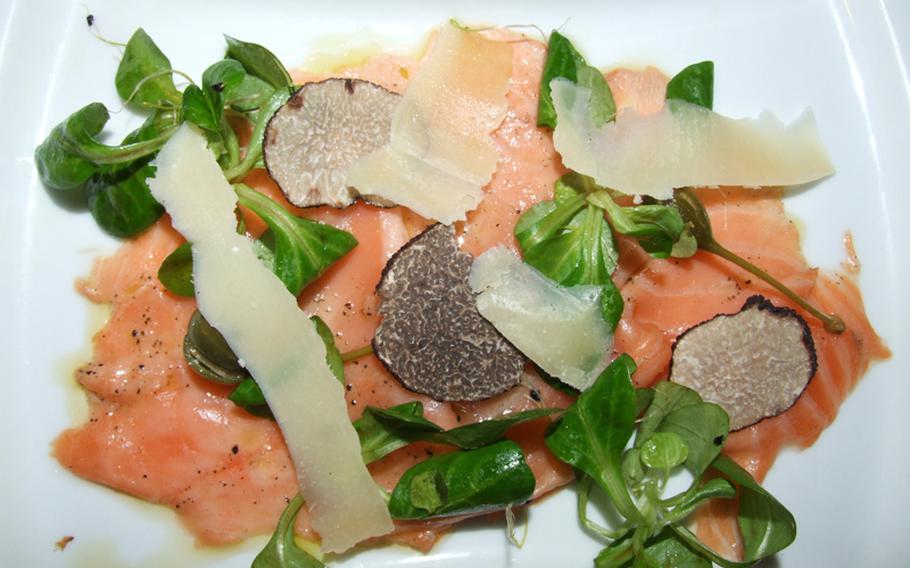 Buy Photo
A delicacy: smoked salmon with truffle slices. Truffles have an earthy taste, which gets stronger as the fungus matures. Truffle season runs from November to March, but experts say they aren't really ready until Christmas. (Leah Larkin/Special to Stars and Stripes) 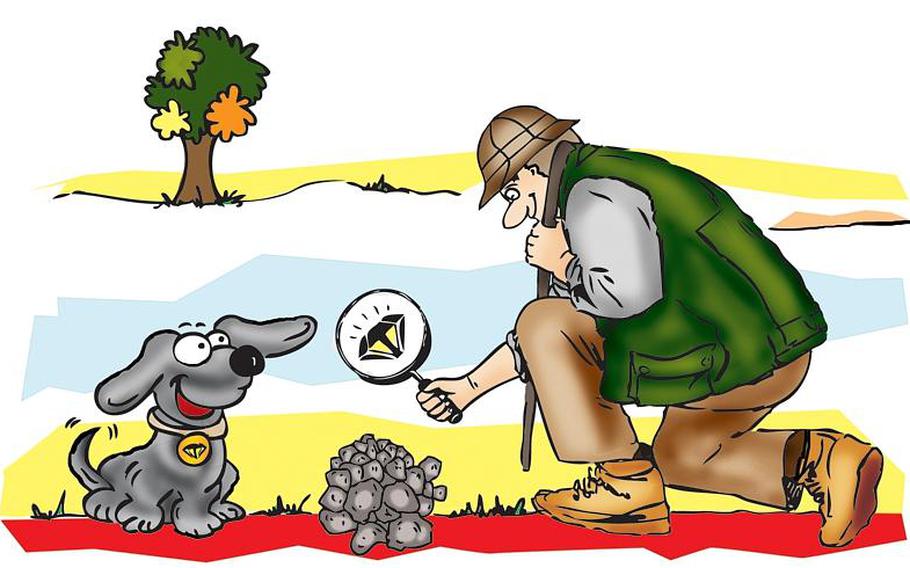 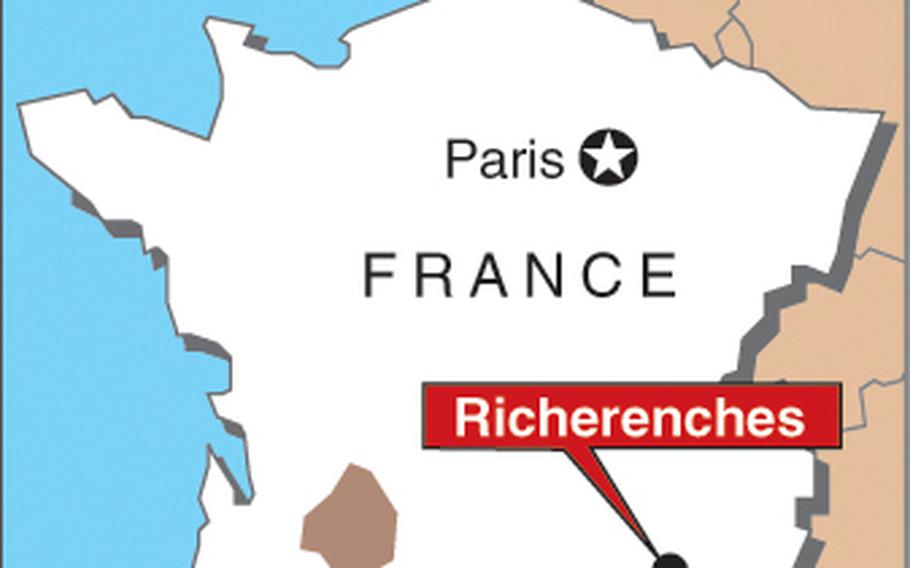 Years ago, a French friend once honored me with the privilege of accompanying him and his friends on a truffle hunt. I have been intrigued by the mystique surrounding this prized fungi for a long time, and after years of pestering him he finally issued the invitation I had hoped for. But there was one very strong condition: I could tell no one the location of our secret search.

We were in northern France near the River Meuse where my friend, Regis, and his companions said they frequently found truffles. We set off into the nearby forest, digging tool and basket in hand. Truffle season runs November through March, and on this day it was snowing and freezing cold.

We started in an area of thick brush at the edge of the forest where a type of nut tree grew. We were told to look for a patch under the tree with no vegetation. Truffles grow among the roots, depleting the soil of nourishment so other plants cannot grow.

We found many such spots and began digging, combing and sifting through the icy ground.

And so it went. For hours &mdash; or so it seemed &mdash; I kept unearthing blackened, semi-decayed acorns, worms and roots, but nary a &ldquo;black diamond,&rdquo; as truffles are called.

None of the others hit pay dirt, either. As the cold pierced my fingers like tiny needles and darkness approached, I was beginning to think it was all a hoax.

The hunt ended sans truffles, but to reassure me that they really do find some, Regis&rsquo; friend invited us back to his home where he proudly displayed a large jar filled with the knobby fungi. And his wife prepared a delicious chicken dinner using some of them.

Now I live in southern France, where precious truffles are big business. Truffle markets and truffle festivals abound. There are even truffle Masses where the earth&rsquo;s sacred treasure is blessed.

Those in the truffle business belong to an exclusive &ldquo;confr&eacute;rie.&rdquo; They turn up at festivities wearing their &ldquo;uniform&rdquo; &mdash; long black robes, broad black hats and huge medallions hanging from yellow ribbons around their necks. Consumers spend lavishly on the cherished delicacy, and restaurants charge dearly for dishes graced with it.

I am still in awe of truffle mystique, so I was thrilled with an invitation last November to join a truffle weekend in Richerenches in Provence, a small town known to have the largest truffle market in the country.

Truffles have traditionally been associated with Perigord in southwestern France &mdash; the Porsche of truffles (there are several varieties) is known as the Perigord truffle. Although we were in southeastern France, truffles are cultivated in these parts by farmers who plant acres of oak trees, which make excellent truffle hosts.

Our truffle weekend got off to a tasty start with a Friday evening four-course meal, each course prepared with truffles.

The first course was brouillade, soft scrambled eggs with truffles. This dish is rated as being the best for appreciating the earthy truffle taste. Presentation &mdash; served in an egg shell &mdash; also got high marks. However, the main course, chicken, cabbage and risotto all prepared with truffles, had little truffle taste. The reason, we were told, was that it was too early in the season as truffles don&rsquo;t mature until Christmas.

Nonetheless, at the next day&rsquo;s truffle market there was plenty of buying and selling of black diamonds. The market was primarily for professionals. Buyers set up shop next to their car trunks or out of the back of vans. They awaited the growers, who came with sacks of truffles and made the rounds to see which buyer would offer the best price.

Each buyer has a small scale to weigh the merchandise. They examine the truffles carefully, often scratching the surface to check the interior color. The darker the color, the more flavor the truffle will have.

The whole process was shrouded in secrecy. The buyers and sellers wanted no photographs taken. Most did not want to talk to a journalist. It is said they fear thieves. A sizeable quantity of truffles is worth thousands of euros, and truffle theft is a big problem. At this market, the going rate was between 150 and 230 euros per kilogram (2.2 pounds), but throughout the season the price will fluctuate depending on quantity and quality of available truffles.

After a truffle omelet lunch in a crowded community hall, we set off to a truffle farm where we accompanied Christian Allegre and his dog Chou Chou into the fields where oak trees grew.

&ldquo;The dog is the master. We follow him,&rdquo; Allegre said.

Chou Chou, a small, sleek, speedy black Labrador, went crazy, running madly from tree to tree, sniffing the ground and often furiously digging. Allegre was quick on the spot, rewarding Chou Chou with a treat and taking over the digging with his truffle tool. Allegre uncovered truffles, not on every spot, but frequently.

He told us about the trees, truffles, dogs and thieves. The latter are known to come to truffle farms at night early in the season after a rain, marking bare spots where the earth is raised, indicating a truffle is growing underneath. They return later, also at night, to unearth and carry off the riches.

The best and biggest truffles are found after a full moon, Allegre said. Labradors make excellent truffle dogs because they are &ldquo;calm, gourmands and attached to their master,&rdquo; he said. Pigs were once used to sniff out the fungi, but they are too big and they can be mean. As to the trees, they must grow for eight years before their roots will nourish truffles.

Why is he enamored of the black diamond?

And it is versatile. Our truffle ramblings ended with a taste of truffle ice cream prepared by a noted pastry chef: creamy vanilla with black specks of truffle. It was surprisingly good.

Photojournalist Leah Larkin lives in France and can be contacted through her website, www.leahlarkin.com, or blog address, www.provencetales.typepad.com.

The season opens Nov. 20 in Richerenches with the truffle market and ceremonies. Truffle markets are held in the town every Saturday morning through the end of March. Find more details by visiting www.richerenches.fr.