Avengers S.T.A.T.I.O.N. in Japan launches visitors into the Marvel Universe 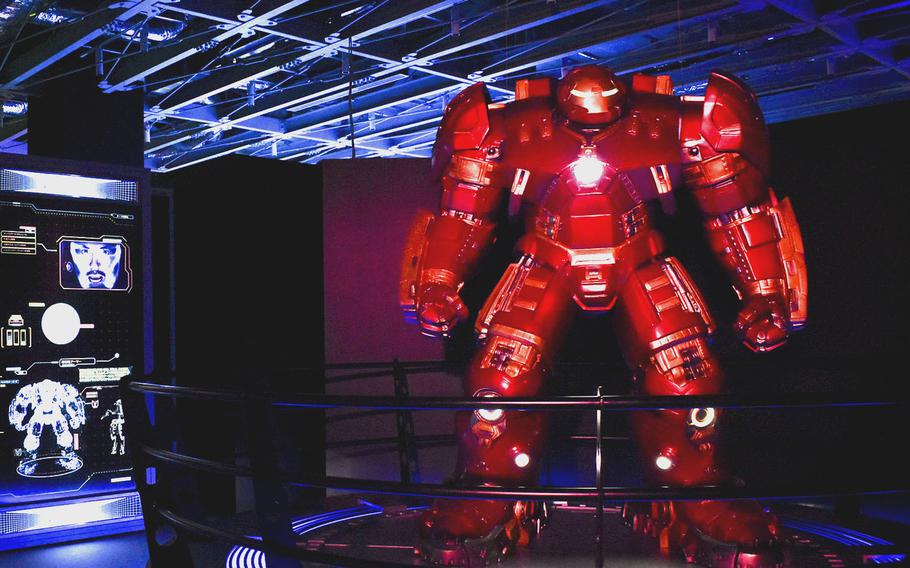 For hardcore fans of the Marvel Cinematic Universe, a treat awaits you in Tokorozawa, a city in Saitama prefecture, north of Tokyo.

The Avengers S.T.A.T.I.O.N. exhibit is wowing visitors until Jan. 29 at the EJ Anime Museum within the Kadokawa Culture Museum, an architectural marvel of a building.

The exhibit was previously featured at Tokyo’s Mori Arts Center Gallery in April, and Kyocera Museum of Art in Kyoto, Japan, in July. It’s been around since its 2014 inception in New York City.

When I found out I could get an up-close and personal look at some of my favorite characters from the Marvel Universe, I quickly made plans. I ventured out on a Tuesday to the trendy entertainment complex of Tokorozawa Sakura Town. A train ride from Fussa Station in western Tokyo put me at Higashi-Tokorozawa Station within an hour. A 15-minute walk from there gets you to the building.

Entering the museum, I was met by an employee, who ushered me to the second-floor ticket counter. After paying the 2,400 yen admission, about $16.50, I took the stairs to the third floor where the exhibit is located. Elevators are also available.

An employee took my ticket and recited, in Japanese, a few guidelines for conduct once inside, including photography. No selfie sticks, tripods, or flash and absolutely no video are allowed. 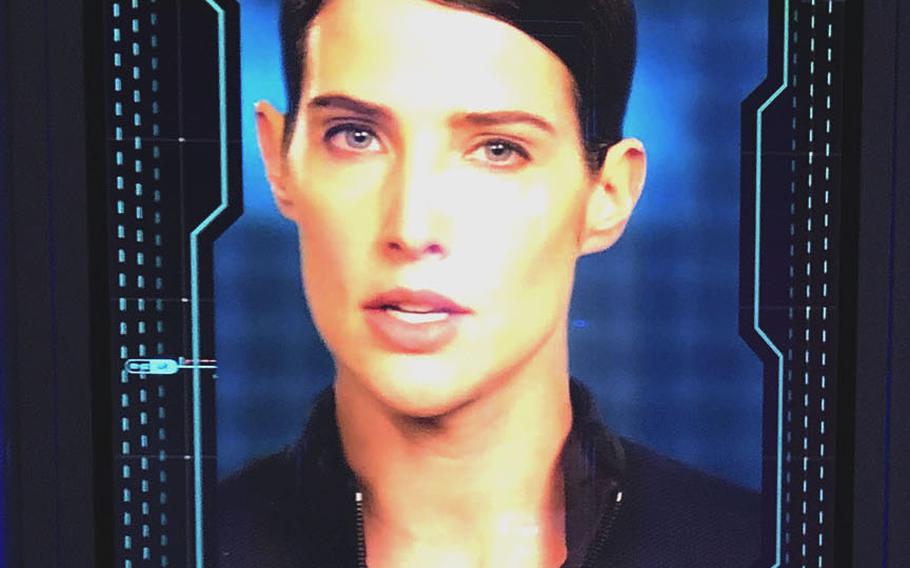 After that I was led into a curtained room for a short Avengers-themed video briefing. It included multi-screen footage of scenes from the Avengers movies, and was presented by Agent Maria Hill, a member of S.H.I.E.L.D., or Strategic Homeland Intervention, Enforcement and Logistics Division, and a familiar face on all the Avengers films. Because this is the Avengers training facility, I felt I was being prepared for Avenger status.

At the end of the briefing, I was ushered into the exhibit areas. Each is sectioned off and numbered under “secure levels.” 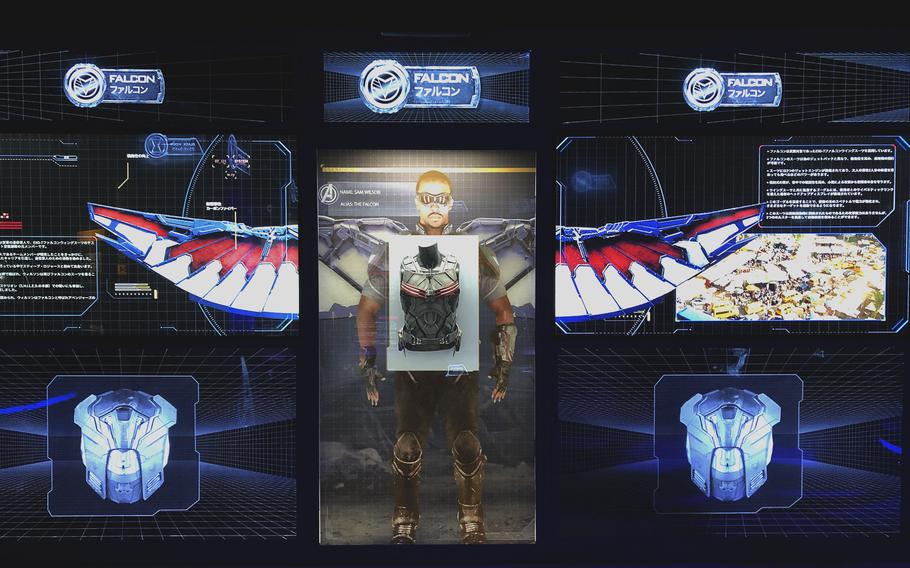 Marvel's Avengers superhero The Falcon in a video display at the Avengers S.T.A.T.I.O.N., a Marvel exhibit located in Tokorozawa, Japan, Oct.11, 2022. (Juan King/Stars and Stripes)

At secure level 1, a full-length figure of “Cap,” or Captain America, stands to your right. His uniform is on display, along with video graphics of his statistics, exploits and a couple true-to-life models of his famous vibranium shield.

A replica of Cap’s Harley-Davidson Street 750 motorcycle, featured in “Captain America: Winter Soldier,” sits in this section. I asked another visitor to photograph me on the bike, which is allowed.

Moving on, I found an 8-foot-tall digital model of one of my favorite characters, Hulk. 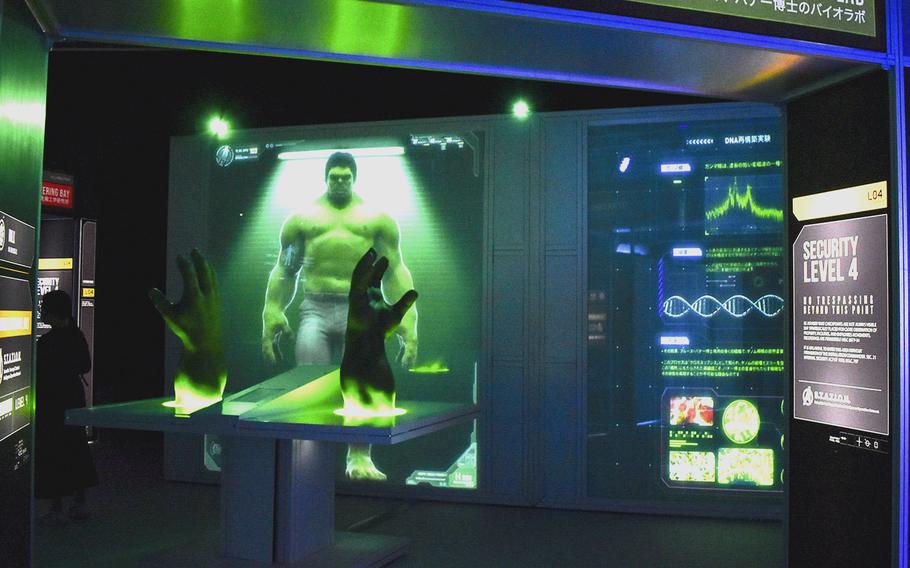 Marvel Cinematic Universe's Hulk stands on a video display at the Avengers S.T.A.T.I.O.N. exhibit at the EJ Anime Museum in Tokorozawa, Japan, on Oct. 11, 2022. (Juan King/Stars and Stripes)

Two large re-creations of his hands rest on a podium with an interactive video screen between them. Three modes allowed you to tap the screen to make the Hulk pose or do one of his signature moves.

An Iron Man interactive video is also available, allowing me to suit up in both his regular armor and the Hulkbuster armor to fight off enemies.

Further in, more of my favorites, including Black Panther, Black Widow and War Machine, had life-sized displays along with costumes, weapons and video footage from the Avenger movies. 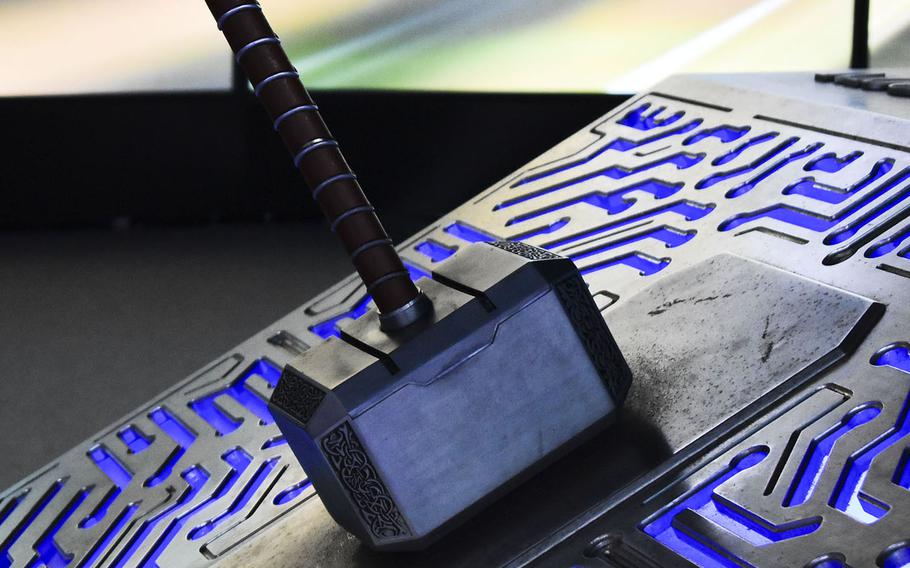 Thor's Mjolnir, or hammer, from the Marvel Cinematic Universe, sits on a glowing display at the Avengers S.T.A.T.I.O.N. exhibit in Tokorozawa, Japan, on Oct. 22, 2022. (Juan King/Stars and Stripes)

A lineup of Iron Man’s armor evolution; a giant display of the villainous Thanos and his Infinity Gauntlet in the Hall of Avengers; and Thor’s Mjolnir, or hammer, are among other things you will see on a visit.

Superhero fans will find all the hero characters they love at Avengers S.T.A.T.I.O.N., and a few of the more sinister characters they may hate. A tall replica of the Chitauri, one of the alien creatures that attacked New York City in the first installment of The Avengers movies, stands creepily behind one display glass.

The walk-through ended with another multi-screen video sign-off by Agent Hill, who dubbed me a new Avengers S.T.A.T.I.O.N. agent. Now I just needed to come up with an agent name for myself.

Directions: An hour train ride from Fussa Station to Higashi-Tokorozawa Station; 15-minute walk to the museum.

Information: Tickets can be purchased at the museum or online at eplus.jp/avengers-exhibition. No re-entry allowed; no available ticket discounts for seniors or disabled; entry could be restricted if the venue reaches full capacity. online: avengersstation.jp