‘Rock and Roll All Nite’: Kiss delivers a final salute to loyal fans at Tokyo Dome 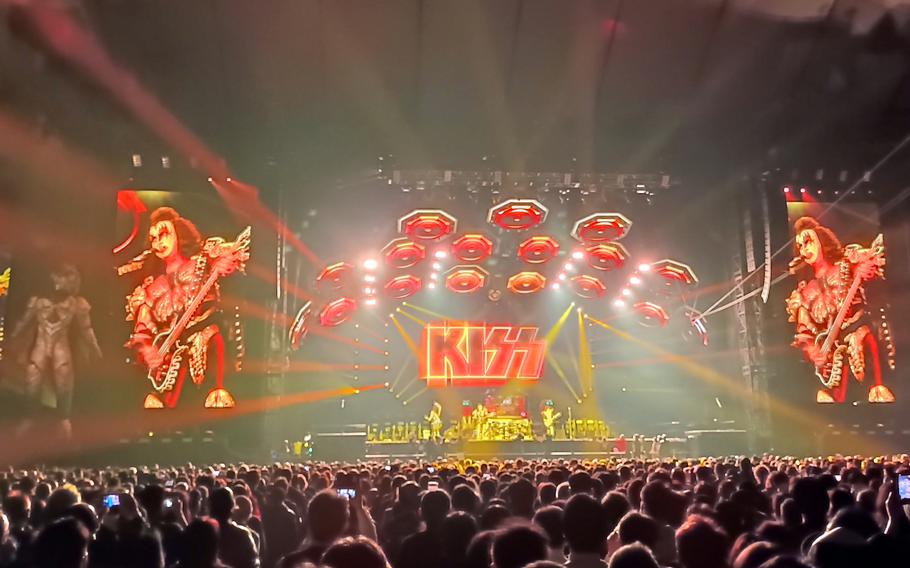 Kiss performs what is expected to be its final performance in Japan at Tokyo Dome, Nov. 30, 2022. (Koichi Kuriyama/Stars and Stripes)

When an urgent email from Stars and Stripes’ Pacific bureau chief fell into my inbox Nov. 30 asking if I could get to the Tokyo Dome quickly for a final Kiss concert that night, I was more than ready.

The “Awesome KISS Mix” folder is always available on the very top of my smartphone playlists. Only the previous day I had grabbed my Les Paul and without a thought started on “Deuce,” my favorite Kiss guitar riff. Ace Frehley, the band’s original lead guitarist, was my model for a cool rock star, the musician on whose playing style I based my own.

“Sure, why not!” I replied via email. No one is a bigger Kiss freak than I, and this, after all, was the band’s End of the Road World Tour.

Excitement grew as I jumped onto the Metro for the Tokyo Dome. Instantly I was drawn back to the last time I was inside the Dome, in 1997, coincidentally, for a Kiss concert. I also saw the band play the prior year in Seattle during the same tour.

Exiting the subway, I could see the band’s legion of fans, the Kiss Army, out in force: in restrooms, restaurants, convenience stores – everywhere I turned. 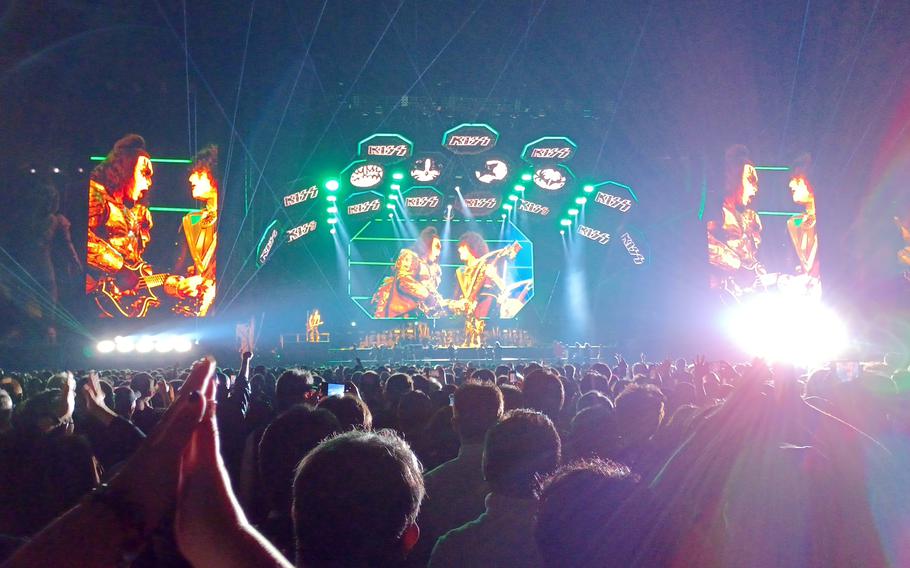 Kiss performs what is expected to be its final performance in Japan at Tokyo Dome, Nov. 30, 2022. (Koichi Kuriyama/Stars and Stripes)

Outside the Dome, kids and families heading for a nearby roller coaster jostled with middle-aged Kiss fans heading for the arena, a cross-section of humanity passing in the night. Some fans wore Kiss T-shirts from previous tours, some wore the kabuki-style trademark Kiss make-up and others went all out and dressed in handmade old-school Kiss stage costumes.

This was a special occasion, the last tour ever by the band, of whom just two members of the founding lineup remain: rhythm guitarist and singer Paul Stanley and bassist Gene Simmons, now ages 70 and 73, respectively. 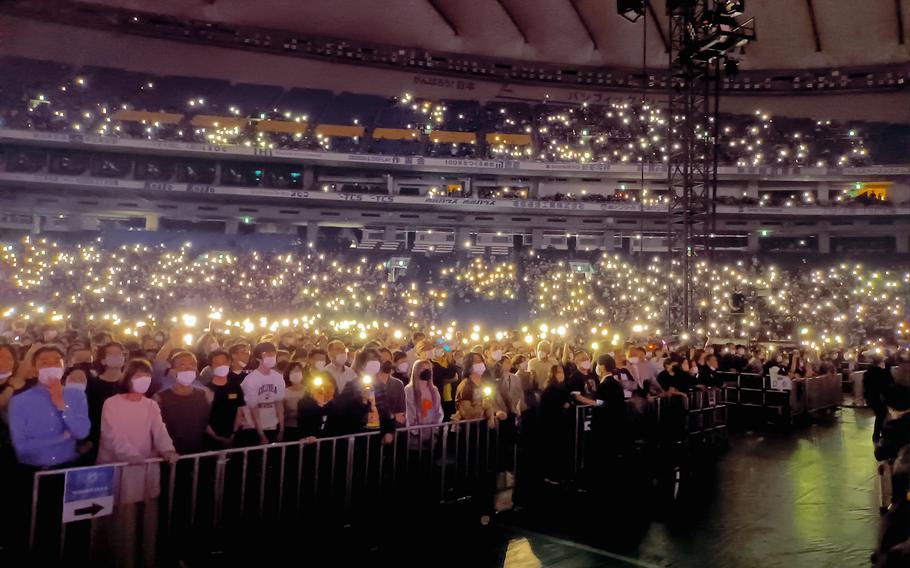 An audience at Tokyo Dome watches Kiss perform what is expected to be the Rock and Roll Hall of Famers' farewell performane in Japan, Nov. 30, 2022. (Koichi Kuriyama/Stars and Stripes)

Inside, Led Zeppelin’s “Rock ‘n’ Roll” issued from the loudspeakers, signaling the show was about to start. The audience was up and screaming. Then came a voice: “All right Tokyo! You wanted the best; you got the best. The hottest band in the world, KISSSSSS!!”

Drummer Eric Singer manned his kit on the riser as Simmons, Stanley and lead guitarist Tommy Thayer descended from the ceiling playing “Detroit Rock City,” a Kiss start-up standard since the 1970s, amid pyrotechnics, flashing lights and a mega-screen backdrop. 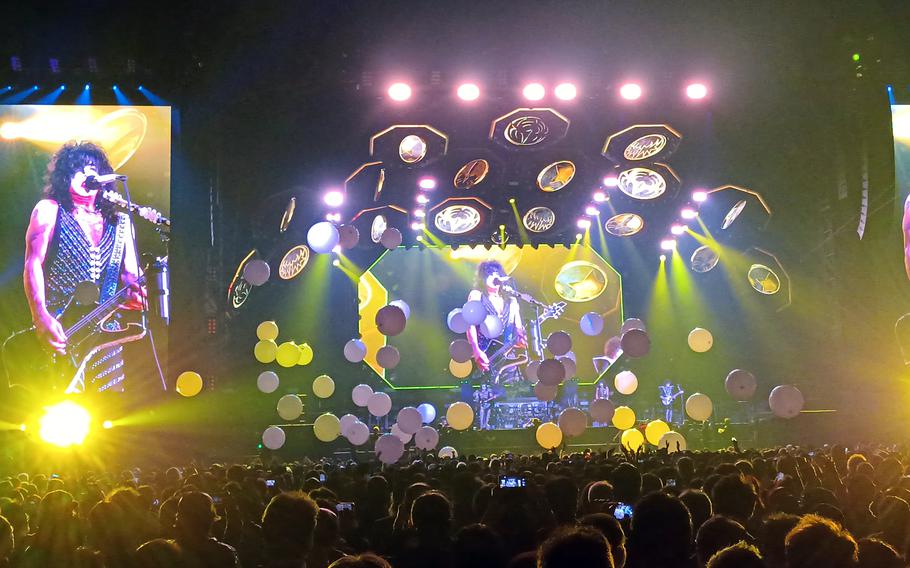 Kiss performs what is expected to be its final show in Japan at Tokyo Dome, Nov. 30, 2022. (Koichi Kuriyama/Stars and Stripes)

I almost cried thinking this may be the very last Kiss visit to Tokyo. The make-up hides their actual “un-masked” appearance, but it was hard to believe KISS is retiring from the stage at the end of the tour.

Simmons still sparked fire with “I Love it Loud” and spit blood during “God of Thunder.”

Stanley in his thigh-high black platform boots flew via an overhead cable to a platform in mid-arena to play “Love Gun.” It was good to hear their announcer shout, “Anatawa saikou!” (you’re the best!)

The two “freshmen” in their 60s are only slightly younger than their bandmates and have been with Kiss for decades. 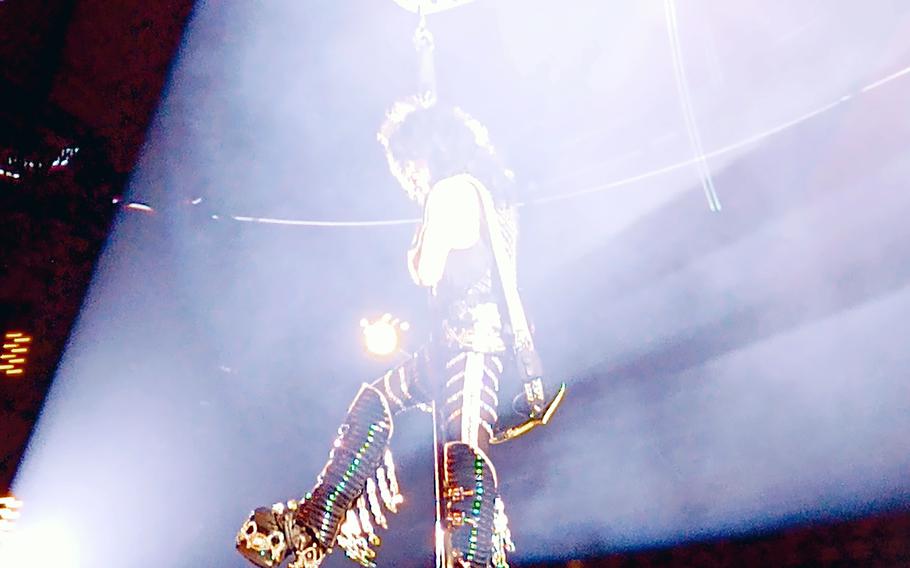 Paul Stanley soars over the crowd at Tokyo Dome during Kiss' farewell performance in Japan, Nov. 30, 2022. (Koichi Kuriyama/Stars and Stripes)

Thayer blasted rocket fire from his Les Paul during “Cold Gin” as ably as Ace Frehley in earlier days. Singer delivered a melancholy “Beth,” the band’s signature ballad and ode to broken hearts and burgeoning rock stars. In tribute the Tokyo audience lifted their lit smartphone screens, an echo of Bic lighters held aloft a generation ago.

Japanese society continued a mask-up policy at the concert venue as a COVID-19 prevention measure. It might be weird for people in the U.S. or European countries with no more mask policies to see masked-up KISS play for a masked-up audience.

In fact, Kiss had already played a “final show” in Tokyo in 2019, right before the pandemic started. So, you might think, what, a final show, again? For the money?

The answer is that like many other bands, Kiss canceled the remainder of its tour due to the pandemic, and because Simmons and Stanley experienced health issues. 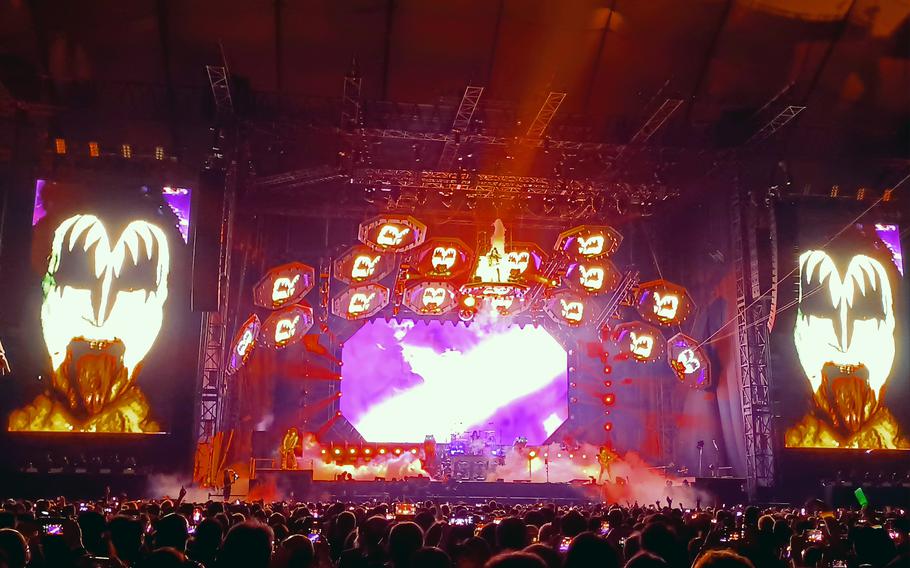 The band rescheduled the final world tour after the pandemic eased a bit, but revisiting Japan was already a possibility. Many popular rock bands of the 1970s, including Queen, Cheap Trick and, later, Bon Jovi, were “discovered” while on tour in Japan and became quite popular here.

And of course, Kiss was definitely one of those bands. Hit-making performances in New York and Detroit made them popular in Japan before the band even hit these shores. I believe Kiss returned for one more night to pay back their Japanese fans’ loyalty.

Then came the finale, the final song in Tokyo, and the last Kiss performance in Japan, “Rock and Roll All Nite,” their monster 1975 hit. Balloons fell from the ceiling and confetti cannons showered the crowd; Stanley finished up 50 years on stage by smashing his guitar.

Then this huge rock-and-roll party was over, but the next party was only getting started. At home I took my collection of Kiss vinyl from the closet and spent the weekend spinning them on the turntable, a rock ‘n roll party, ‘70s style!