An estimated 60,000 to 70,000 people are expected to attend this year’s Tokyo Comic Con at at the Makuhari Messe convention center east of central Tokyo. (Frontier Enterprise)

Get your cosplay costume, cameras and celebrity wish lists ready, Tokyo Comic Con is back after a three-year COVID-19 hiatus.

The convention is taking place Friday through Sunday at the Makuhari Messe convention center in Chiba, east of central Tokyo. An estimated 60,000 to 70,000 people are expected at this year’s convention, Katsuya Ueyama, a Tokyo Comic Con spokesperson, said Nov. 15.

The list of celebrity guests this year includes Jeremy Renner, who plays Hawkeye in the “Avenger” movie franchise; Karen Gillan, Nebula in “Guardians of the Galaxy”; and Hayden Christensen, who starred as Anakin Skywalker/Darth Vader in the “Star Wars” prequels. Tokyo Comic Con continues to announce celebrity guests on its Facebook page.

Staff Sgt. Yair Rubinov, 30, of Palm Coast, Fla., assigned to the 374th Logistics Readiness Squadron at Yokota Air Base, is gearing up for his first Tokyo Comic Con.

“I am going to Comic Con because I have always been into that type of stuff,” he told Stars and Stripes on Oct. 25. “It’s cool to see the characters come to life and to meet some of the voice actors.”

Rubinov said he will be cosplaying as someone from either X-Men or Pokemon.

“I am looking forward to dressing up with my friends and finally getting a chance to attend a comic con,” he said.

This year the event is more focused on TV stars than movie stars. 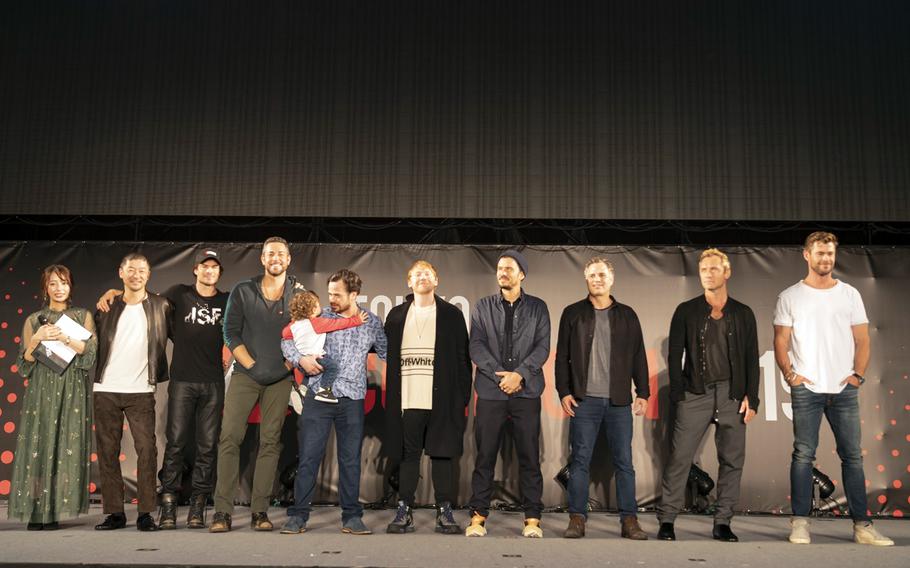 “I think this is going to be the trend,” the president of Tokyo Comic Con, Mitsuaki Munegumi, told Stars and Stripes during a Zoom call Oct. 20. “I think TV stars will be drawing more and more people.”

Joseph Quinn and Jamie Campbell Bower, who portrayed the characters Eddie Munson and Vecna, respectively, on the Netflix show “Stranger Things,” are scheduled to attend this year, Munegumi said.

General admission tickets per day are 4,400 yen, or about $32, for adults and 2,500 yen for high school students. Admission to celebrity panel discussions is free but there’s a charge for autographs and photographs. Tickets are for sale on the official website.

Tokyo Comic Con this year will stretch across five halls inside the center, making it 1.5 times bigger than the last convention in 2019, Munegumi said.

For gearheads, 30 cars and motorcycles, including Batmobiles from different “Batman” movies, and motorcycles from “Terminator” films and from “Indiana Jones and the Last Crusade” will be on display, Munegumi said.

Comic Con started out in 1970 as Golden State Comic Book Convention organized by comic book enthusiast Shel Dorf and a group of San Diegans, according to the Tokyo Comic Con website.

Munegumi staged the progenitor of Tokyo Comic Con in 1998 when he brought David Prowse, who portrayed Darth Vader in costume in the original “Star Wars” trilogy, to the Hollywood Prop Museum in the Tokyo Tower. James Earl Jones did the voice over that audiences associate with Vader.

Prior to Prowse’s appearance, Munegumi had been putting on photo and autograph sessions with celebrities for decades, he said.

“As one of the fans of movie stars that's why I wanted to do this,” Munegumi said.

Starting in 2000, Munegumi booked small hotels, ballrooms and other small convention halls as demand grew for a bigger venue to hold celebrity signings and meet-and-greets.

In 2015, Munegumi said he met with Steve Wozniak, co-founder of Apple, and Stan Lee, comic book legend and publisher of Marvel Comics, at Silicon Valley Comic Con. Consequently, Munegumi said, they asked why not stage a Tokyo Comic Con?

Because Wozniak wanted to make Comic Con a truly global festival, he decided to work with Munegumi to hold the convention in Tokyo.

“If that is the case, Japan must be involved,” Munegumi quoted Wozniak as saying.

The first Tokyo Comic Con opened its doors in December 2016 at the Makuhari Messe.

And the rest is history.

Directions: About a 12-minute walk from the east exist of Kaihimmakuhari Station.

Costs: General admission tickets per day are 4,400 yen, or about $32, for adults and 2,500 yen for high school students. Admission to celebrity panel discussions is free but there’s a charge for autographs and photographs.

Food: A food court will offer a variety of dishes, from sushi and ramen to gourmet hot dogs and steaks.