A shark and a stingray swim among a school of hundreds of fish in one of the many massive exhibits at Oarai's Aqua World. (Alex Wilson/Stars and Stripes)

Aqua World, the centerpiece of any visit to Oarai in Ibaraki prefecture just north of Tokyo, boasts the largest variety of shark species of any aquarium in Japan.

The five-story, 213,000-square-foot aquarium doubles as one of Oarai’s main attractions and the prefectural aquarium. The aquarium celebrated its 20th anniversary in March.

Inside, visitors may find more than 68,000 different sea creatures for a total of approximately 580 different species. Nearly every manner of marine life is represented, including penguins, sea otters, seals, sunfish, crabs and eels.

The biggest draw, however, is the aquarium’s vast array of sharks. As of August, Oarai had 59 different species of sharks on display, including well-known species such as hammerheads and nurse sharks and lesser-known species such as the minuscule saddle carpetshark or the colorful Indonesian speckled catshark.

The aquarium is divided into a series of themed zones. In the “Deep Sea” zone, visitors may see the massive Japanese spider crab or an array of colorful jellyfish; the “Rivers and Streams” zone has playful otters and freshwater fish swimming in simulated waterways. 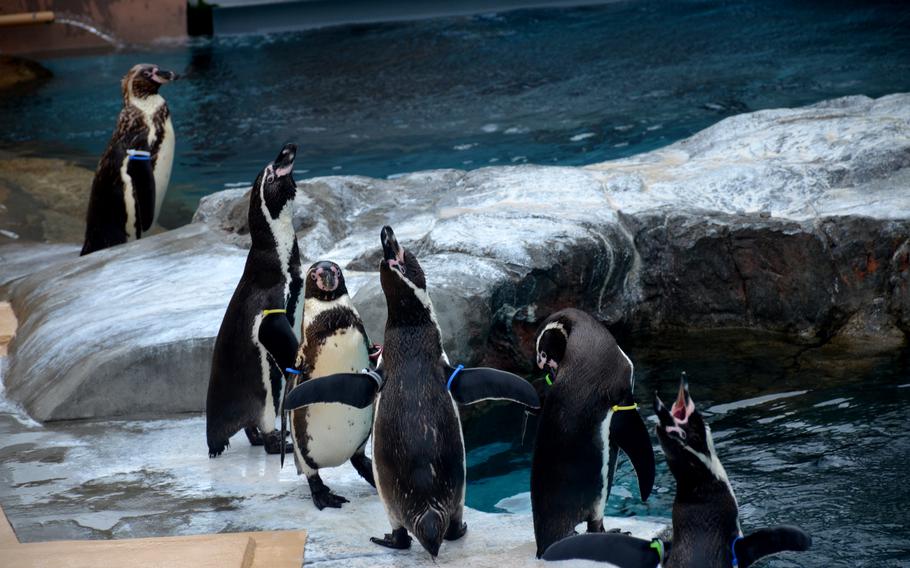 Outside in the “Oceanfront” zone, Humboldt penguins swim in their enclosure and fur seals relax next to the water.

Inside the Ocean Theater, California sea lions and dolphins perform myriad tricks alongside their trainers.

A family-friendly venue, Aqua World is also completely wheelchair accessible. Admission is 2,000 yen ($13.51) for adults, 900 yen for elementary or middle school students, 300 yen for infants and free for children under age 3.

Oarai is just a 1 ½-hour drive from Tokyo or a 2 ½-hours from Yokosuka, making it the perfect destination for a daytrip or weekend getaway. Oarai is also accessible via rail by taking the JR East Line from Shinagawa Station in Tokyo to Mito Station, and then transferring to the Kashima Rinkai Tetsudo Oarai-Kashima line.