Learn a Japanese master’s influence on film at the National Film Archive until Nov. 27 The National Film Archive of Japan in Tokyo is dedicated to the preservation and research of films. (Kelly Agee/Stars and Stripes)

Try to identify this motion picture from the pitch the filmmaker may have made: “Lured by gold, two greedy peasants unknowingly escort a princess and her general across enemy lines.”

Kurosawa’s films motivated a generation of American filmmakers who drew inspiration from his classics “Ran” and “Seven Samurai.” Film buffs can learn more until Nov. 27 about Kurosawa’s oeuvre at an exhibition of his screenwriting at the National Film Archive of Japan in Tokyo.

The seventh-floor exhibition room has permanent and temporary exhibits of film-related materials in Japanese, English, Chinese and Korean. It starts with the birth of film and goes through that history through posters, still photographs, devices and equipment for filmmaking, and the personal items that belonged to noted film personalities.

The gallery charts Japanese filmmaking from the 1910s through several eras, including the golden age of the 1920s, the wartime period, the spread of Japanese cinema in the 1960s and anime. 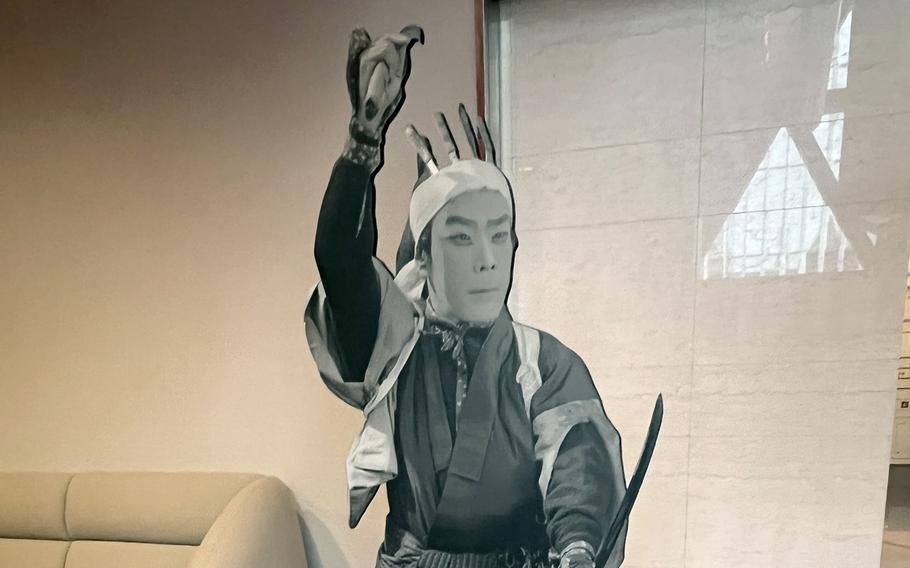 A life-sized cut-out of Matsunosuke Onoe, who starred in hundreds of Japanese films, welcomes visitors to the National Film Archive of Japan in Tokyo. (Kelly Agee/Stars and Stripes)

A life-sized cut-out of Matsunosuke Onoe, “the first movie star of Japan” who starred in hundreds of Japanese films, stands in the gallery lobby.

There is also a biography of my favorite Japanese film star, Toshiro Mifune, who is best known for his 16-film collaboration with Kurosawa, starting with “Seven Samurai.”

The Kurosawa exhibit is in the Exhibition Gallery. Kurosawa is considered by some to be one of the best filmmakers of all time. George Lucas, creator of the “Stars Wars” franchise, apparently thought so.

"The one thing I was really intrigued by was the fact that the story was told from the two lowest characters,” Lucas told the Criterion Collection while discussing “Hidden Fortress” in 2001. “I decided that would be a nice way to tell the ‘Star Wars’ story … that was the strongest influence.” 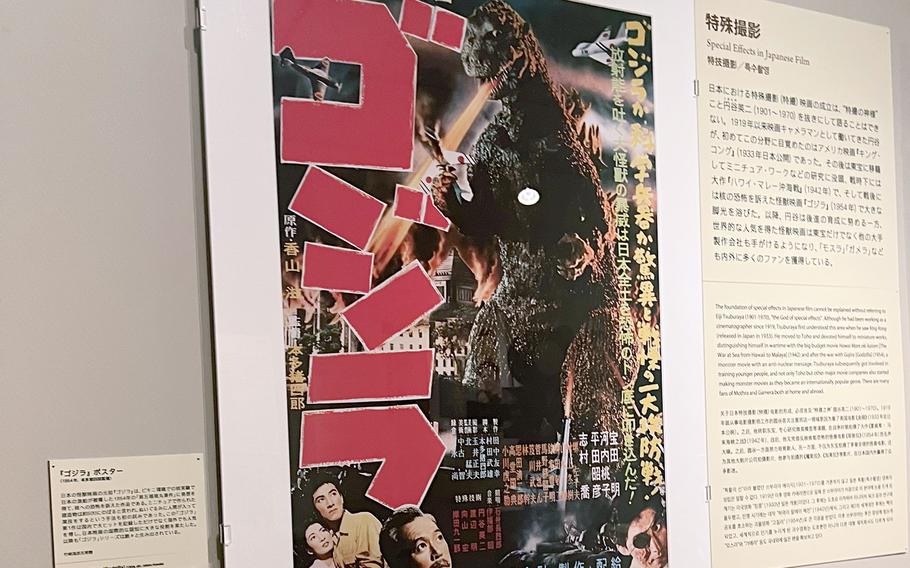 The National Film Archive of Japan displays original film posters, including this one for "Godzilla." (Kelly Agee/Stars and Stripes)

Handwritten versions of Kurosawa’s popular scripts are on display – screenplays that never made it to the big screen, screenplays that were published overseas and screenplays he wrote for other directors who worked under the Japanese film giant Toho.

It’s interesting to see all the drafts that were written until the final version was ready to film.

There are also displays of original film posters, including the first American-run poster for “Seven Samurai.” Photography is prohibited in this part of the exhibit.

It was really neat to be within touching distance of a major part of film history.

For Japanese film lovers and fans of Kurosawa, this is the place for you. The National Film Archive of Japan in Tokyo is dedicated to the preservation and research of films. (Kelly Agee/Stars and Stripes)

Directions: A short walk from Kyobashi Station; follow the signs for the Ginza Gate and head out via exit 1.

Price: 250 yen, adults; 130 yen, university and college students; free for seniors, disabled people with one companion, and students younger than 18