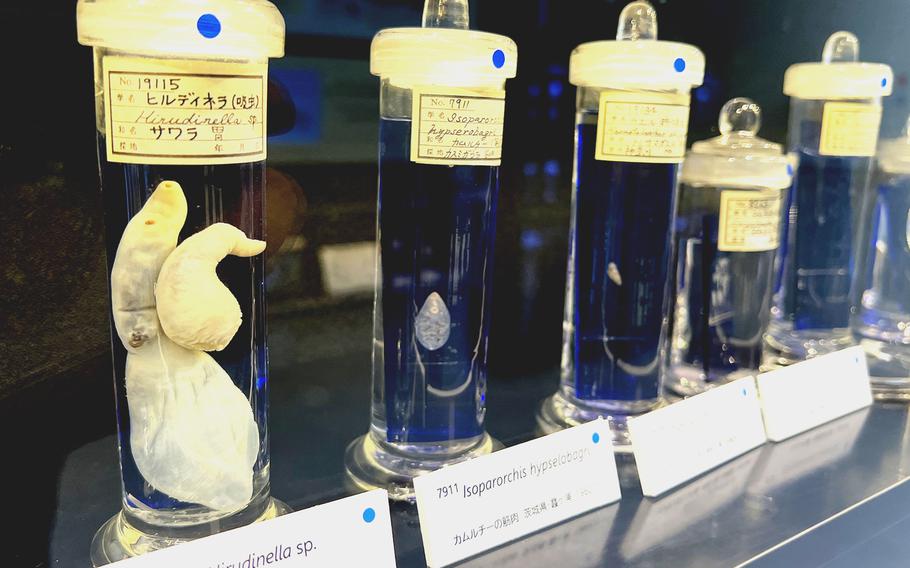 Parasites in jars are on displaty at the Meguro Parasitological Museum in Meguro, Tokyo, Japan, on June 23, 2022. (Kelly Agee/Stars and Stripes)

A small building in the Meguro ward in central Tokyo seems unassuming from without, but within it’s filled with odd exhibits that are definitely not for the squeamish.

The Meguro Parasitological Museum is a private research facility specializing in parasitology, the study of parasitic organisms. The offbeat museum consists of two floors containing 300 specimens of parasites, including species of tapeworms, lice and mites.

The museum is free but accepts donations. All the displays have English text, and it provides a guidebook in English.

The first-floor exhibits, Diversity of Parasites, is filled with displays of different parasitic organisms in jars, some even have accompanying videos and illustrated charts with information on each parasite and the species they use as hosts.

Guests can also learn about the life cycle of a parasite through illustrations. One display shows that adult parasites produce large amounts of eggs and larvae, and that some species can even reproduce asexually. One display explained that parasites evolve to exploit their hosts. Some parasites can even manipulate the host’s behavior to transfer the parasite from the sick host to a new, healthy and stronger host. An example of Fischoederius elongatus, a foodborne parasite, is displayed beneath a magnifying glass at the Meguro Parasitological Museum in Meguro Tokyo, Japan, June 23, 2022. (Kelly Agee/Stars and Stripes)

Another display showed the diversity of parasites. Though the exact number isn’t known, parasites may outnumber host species.

The second-floor exhibits, Human and Zoonotic Parasites, are even more bizarre and stomach turning. These show the growth parasites are capable of inside their human and animal hosts and the symptoms they can cause. If you are squeamish, definitely stay away from the second floor.

One of the most disturbing exhibits is a display of a 29-foot dibothriocephalus nihonkaiensis, an intestinal tapeworm that was found in a human who had eaten raw salmon three months previously. A 28.9-foot-long tapeworm that was found in a human is displayed at the Meguro Parasitological Museum in Meguro Tokyo, Japan, on June 23, 2022. (Kelly Agee/Stars and Stripes)

There are also photographic exhibits of how parasites can affect humans, including a display of the wuchereria bancrofi, a type of roundworm that causes the lymphatic vessels to enlarge. That leads to elephantiasis, in which a part of the body becomes very large.

A second-floor exhibit also details the life of the museum founder, Dr. Satoru Kamegai, a medical doctor who researched parasitic diseases. Kamegai used private funds to establish the museum in 1953 to research parasitology and to educate the public. The museum has been operating for 65 years as a nonprofit, charitable organization.

They also sell parasite tote bags for 2,000 yen or $14.82. Books are also available on a variety of different species. 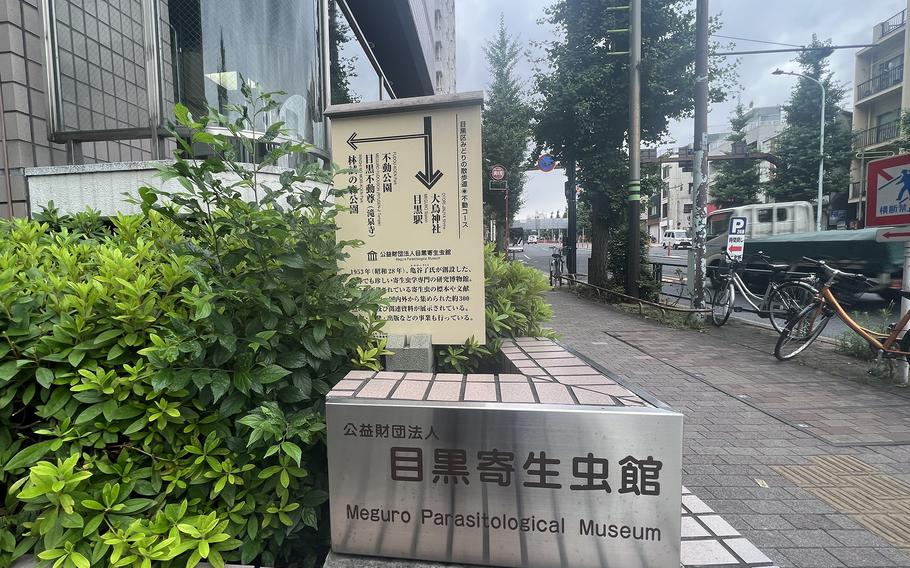 The Meguro Parasitological Museum is locate in Meguro, Tokyo, Japan, on June 23, 2022. (Kelly Agee/Stars and Stripes)

Food: The surrounding area has plenty of dining options