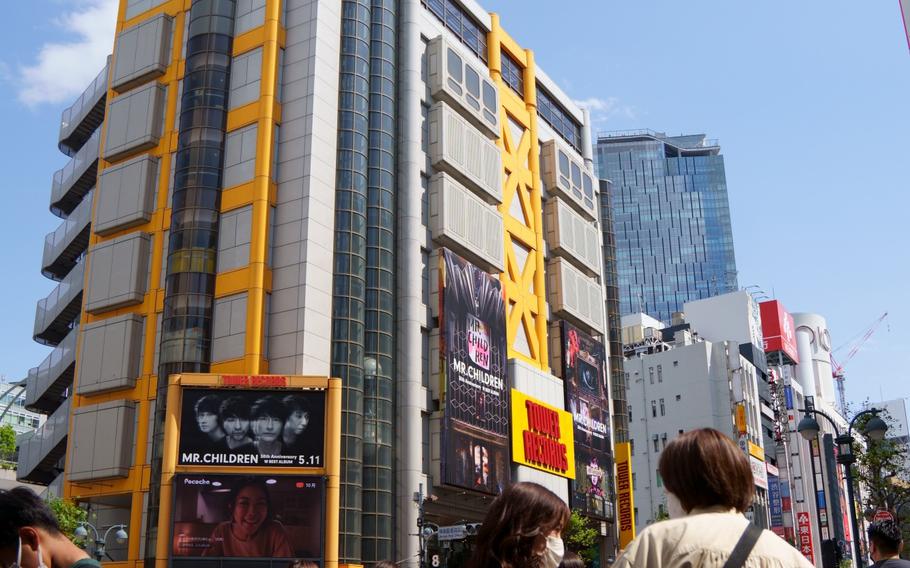 Once an international powerhouse in retail music, Tower Records, founded in the United States in 1960, reached its zenith in the 1990s just as Gen Z was being born.  (Akifumi Ishikawa/Stars and Stripes)

Tower Records is a store, an experience, and sadly, something Generation Z in America will never experience. Unless they make a pilgrimage to Japan.

Once an international powerhouse in retail music, Tower Records, founded in the United States in 1960, reached its zenith in the 1990s just as Gen Z was being born. Burdened with debt and besieged by competitors, Tower filed for bankruptcy in the U.S. in 2006.

However, the Japan operation became independent in 2002 and today the landmark store in Tokyo is the flagship for more than 80 retail outlets. Its nine floors are worth any music lover spending an hour, an afternoon, or a day exploring.

The store is just a short walk from Shibuya Station, across the famed Shibuya Scramble crossing. Step off the street past the “No Music, No Life” sign and into the first floor and you’ll find the newest music by the trendiest artists. Tower Records’ landmark store in Shibuya, Tokyo, is just a short stroll from the Hachiko Exit of Shibuya Station. (Akifumi Ishikawa/Stars and Stripes)

A busy weekend will find a long, winding line of eager customers at the sales counter clutching their CD purchases. Nearby, elevators carry shoppers higher into this music nirvana, but the escalator is the preferred mode of travel.

A café on the second floor serves food and drinks in a space to relax, along with some reading material – books and magazines – in English and Japanese. Coffee sells for 550 to 680 yen. The menu lists pasta, along with waffles or French toast a la mode. Reservations are recommended. 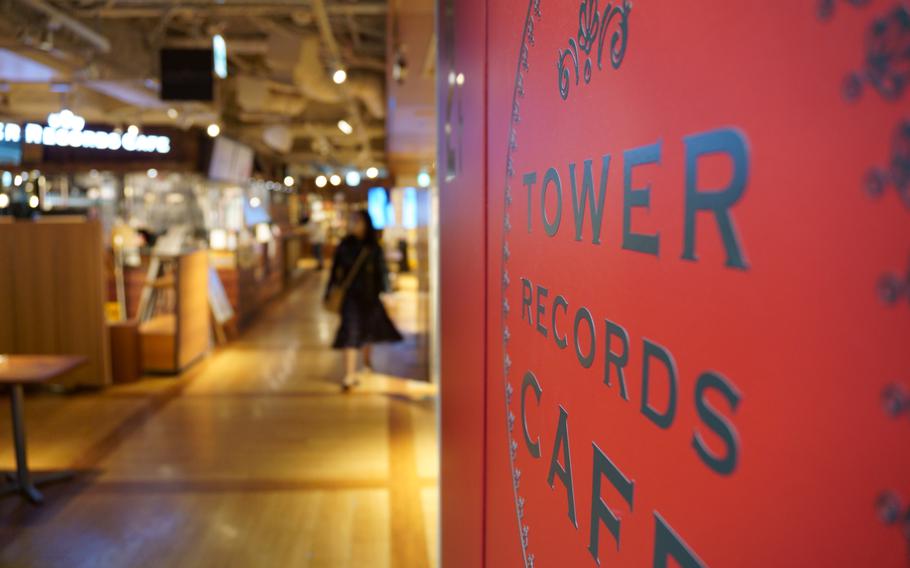 A cafe on the second floor of Tower Records’ landmark store in Tokyo’s Shibuya district provides drinks, snacks and respite from your music shopping. (Akifumi Ishikawa/Stars and Stripes)

Music has the power to transcend language and cultural barriers. Japanese rap, pop and indie music live on the third floor, and that’s where I discovered Reol, a Japanese rapper, singer and songwriter, whose CDs were on display along with a screen that played the video for her song, “Boy.” 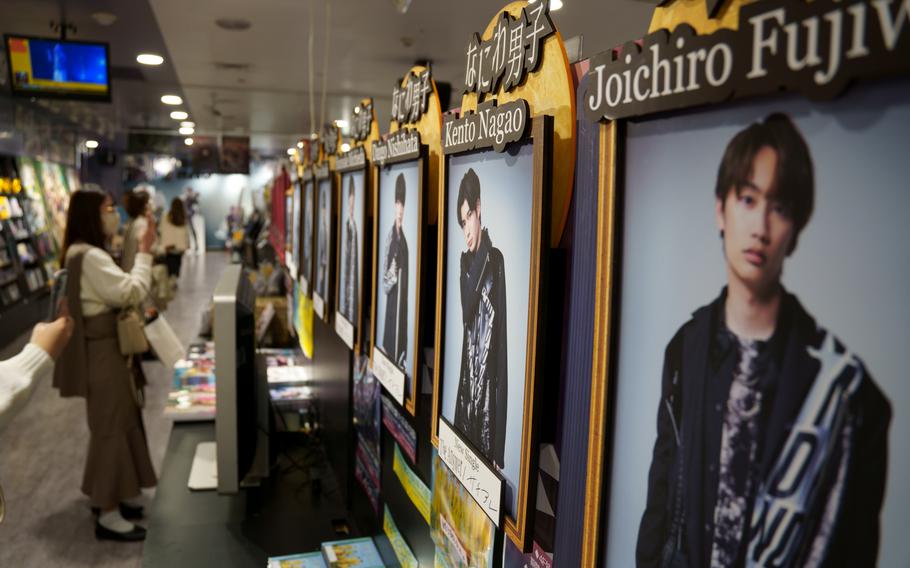 The nine floors of Tower Records’ store in Shibuya, Tokyo, are worth any music lover spending an hour, an afternoon, or a day exploring.  (Akifumi Ishikawa/Stars and Stripes) The nine floors of Tower Records’ store in Shibuya, Tokyo, are worth any music lover spending an hour, an afternoon, or a day exploring.  (Akifumi Ishikawa/Stars and Stripes)

Continuing upward, I found that signs for the fourth floor are only in hiragana, unlike those in English above and below. This section is where pre-teen pop and anime soundtracks are found.

On the fifth floor, I swooned over some of my favorite artists. Here you’ll find the latest in K-pop, Korean popular music that is sweeping the globe. Tower has the music, but also magazines, posters and photos of fans’ favorite K-pop groups.

The sixth floor is a retail repository of rock ‘n’ roll and its black platter of sound, the vinyl record. I admit more than a little bias – I collect vinyl and have a deep, abiding love for classic rock.

Exiting the escalator, the section to the right is devoted to vinyl. To the left are CDs.

Avid vinyl collectors will be at home flipping through the bins. Up front, headphones at listening stations allow customers to sample music before they make their selections. 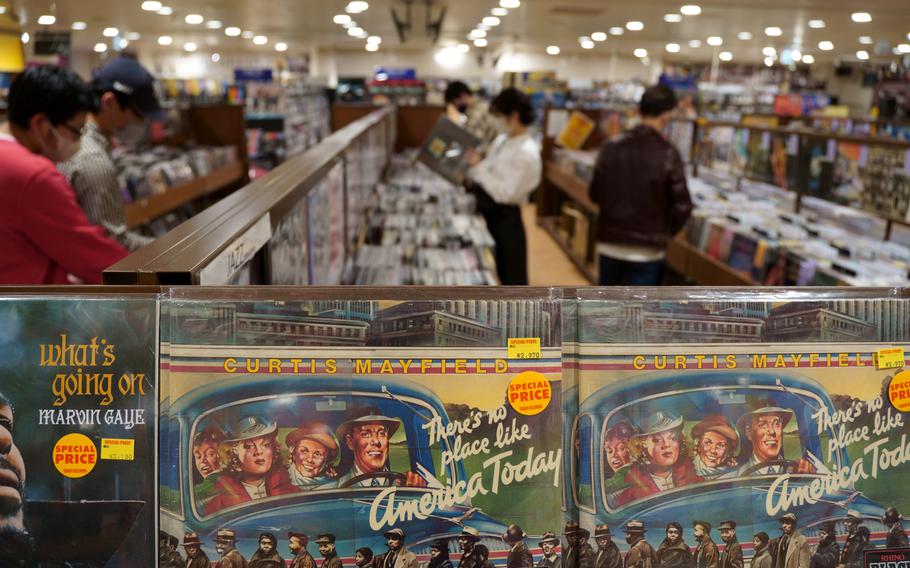 Vinyl lovers browse on the sixth floor of Tower Records in Shibuya, Tokyo, Monday, May 2, 2022. (Akifumi Ishikawa/Stars and Stripes) 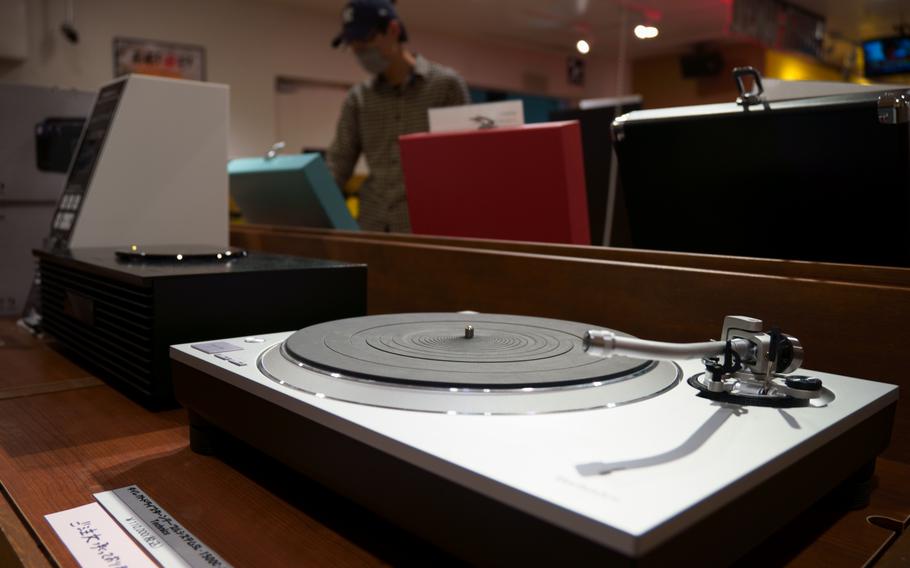 A vinyl lover browses on the sixth floor of Tower Records in Shibuya, Tokyo, Monday, May 2, 2022. (Akifumi Ishikawa/Stars and Stripes)

The used singles bin yielded some gems: Paul McCartney's "Simply Having a Wonderful Christmas Time," John Lennon's "Imagine," and singles by his son Julian Lennon, Huey Lewis and the News, Santana, the Carpenters, Adam Ant and The Doors.

The assortment of 12-inch records is more extensive and includes all music types, from classic rock to J-pop. I found the soundtracks to the movies "Cabaret" and "The Sound of Music." The insert for “Sound of Music” was absorbing. The Japanese version includes the lyrics to all the songs in hiragana as well as English.

Prince and the King of Pop

The seventh floor holds a mix of genres. Soul, hip-hop, club and J-club, reggae and J-reggae, jazz, blues and country, among others, live here. While sampling tracks at the listening stations, I discovered Yo-yo the Piano Man, a Japanese classical and jazz musician.

However, the thing on the seventh floor that shocked me the most was the display of CDs and vinyl albums dedicated to Prince, the singer-songwriter, guitarist, producer and actor who died in 2016 of a drug overdose at his home in Minnesota.

Right next to that, behind glass, is a chunk of cement with the handprints of the King of Pop, Michael Jackson. Jackson left the prints, which he also signed, during a visit to the store in 1996.

Behind the display is a section dedicated to Jackson that includes a neat, remastered edition of my favorite album, "Thriller." They also have Jackson T-shirts, magazines, and CDs.

Tower Records the global behemoth may have vanished, but its surviving outpost in Japan is worth a trip.