"Applause" by street artist Banksy is on exhibit at With Harajuku in Tokyo until March 2022. (Joseph Ditzler/Stars and Stripes)

Maybe you’ve heard about artist Banksy, the ubiquitous but faceless spray-painter of social commentary, but if not, you have until March to see some of his best-known work in Tokyo.

“Banksy: Genius or Vandal?” closes March 8 at With Harajuku in a retail center just east of and across the street from Harajuku Station. Its producers style the exhibition as unauthorized and drawn from private collections of the U.K.-based artist.

Inside the warren of rooms strung together to house the 40-plus pieces gathered for the showing are Banksy works grouped by theme: consumption, protest, pop art. A faceless art provocateur, Banksy is best known for his works of graffiti that turn ordinary walls into collector’s items.

But the exhibit shows a variety of media, including a temporary installation in Weston-super-Mare, a seaside English resort, called “Dismaland.” A short film recalls the 2015 project that, according to the exhibit, wasn’t a straight-on Disney satire but more a commentary inspired by the Mouse.

The show starts with a mock-up of what Banksy’s studio might look like, a re-creation based on a “variety of photos and videos.” The organizers send visitors through in small groups, and everyone is masked, but inside the galleries people begin to bunch up in groups, creating currents and backwater in the groups following them, so be advised. It’s not necessarily the best place to avoid COVID-19.

The first gallery is a collection of the artist’s work in stencil that ridicules the consumer habits of the West, mingling iconic brands with the iconography of politics and religion. 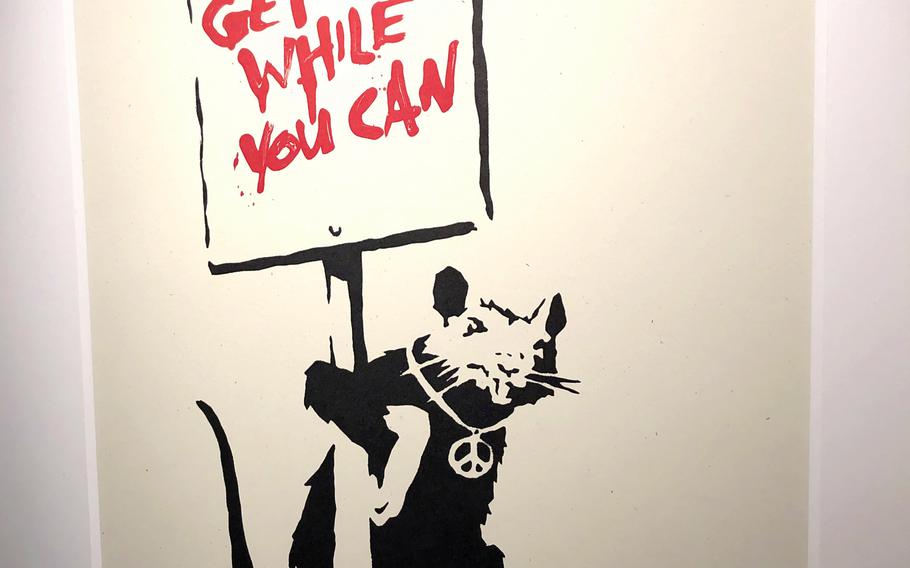 One room of the "Banksy: Genius or Vandal?" exhibit in Tokyo features the anonymous arist's work with images of rats. (Joseph Ditzler/Stars and Stripes)

Around the corner, the military and police are targets of barbed commentary. Banksy’s work ties the capitalist impulse to the agencies of force and control but weaves a thread of awareness by the consumer class that says this too shall pass.

The British royal family and British politics are skewered forthrightly in lithographs depicting the “Monkey Queen” and the “Monkey Parliament.”

Even those only vaguely aware of the name Banksy may recognize a couple of well-known works, a protestor in a bandanna mask and hat with its bill reversed, his arm cocked like a big-league pitcher, about to toss what the viewer will expect is a Molotov cocktail but in Banksy’s interpretation is a floral bouquet.

The exhibition concludes with “Girl with a Balloon,” the first version of which appeared outside Waterloo Station in London in 2002. The artist later incorporated it in murals and multimedia works that drew attention to the Palestinian-Israeli divide in the West Bank and the conflict in Syria. “Girl with a Balloon” is widely considered the most recognizable piece of work associated with Banksy.

No matter your intellectual proclivities, Banksy serves up food for thought. 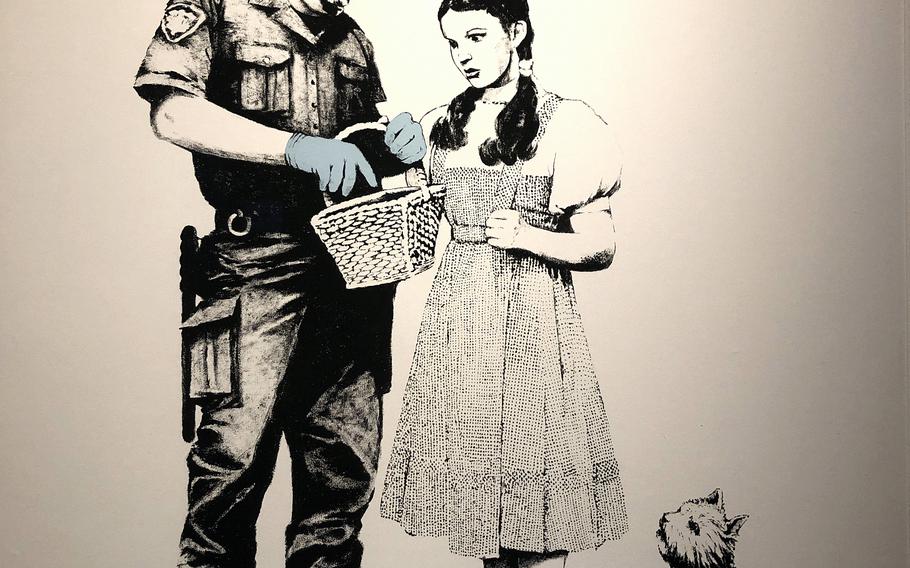 "Stop and Search" by street artist Banksy is on exhibit at With Harajuku in Tokyo until March 2022. (Joseph Ditzler/Stars and Stripes)

Directions: From Shinjuku Station take the Yamanote Line to Harajuku Station. Exit the east gate, turn left and look for the Ikea in the building across the street. The venue, With Harajuku, is on the third floor. Tickets are available at well-marked booth in the ground-floor breezeway adjacent the Ikea.

Food: Plenty of options on nearby Takeshita Street and in the surrounding area.