Kujira, an Italian eatery on Okinawa, offers an ocean of tasty possibilities 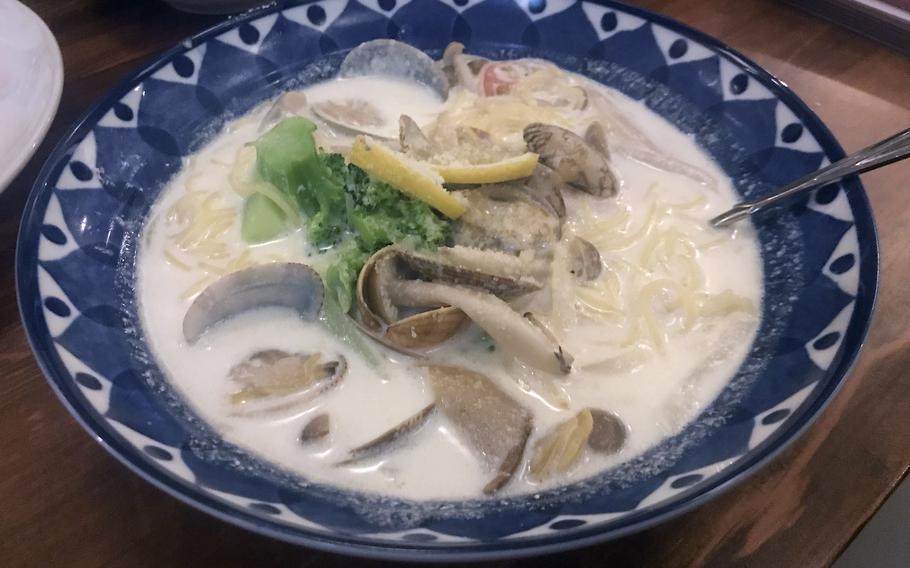 Kujira’s capellini with lemon cream, “clam chowder style,” was to die for, with clean and flavorful clams, perfectly cooked pasta and a wholesome, creamy broth. (Matthew M. Burke/Stars and Stripes)

Kujira is an Italian restaurant on Okinawa that does not ask diners to choose between a nice meal and a family-friendly outing.

The restaurant, whose name translates to “whale” in Japanese, uses organic and high-quality ingredients to concoct its delectable homemade dishes.

Kujira offers intimate settings, perfect for a romantic rendezvous, but also family spreads with toys and books for children. It is a restaurant that truly caters to everyone. English-language menus are available upon request.

Kujira was founded in 2015 by Hiroki Ochiai, who hails from Gunma prefecture, according to the restaurant’s website. After graduating from university, he managed a slew of restaurants, from bars to soba shops and even an Okinawan restaurant in Tokyo. 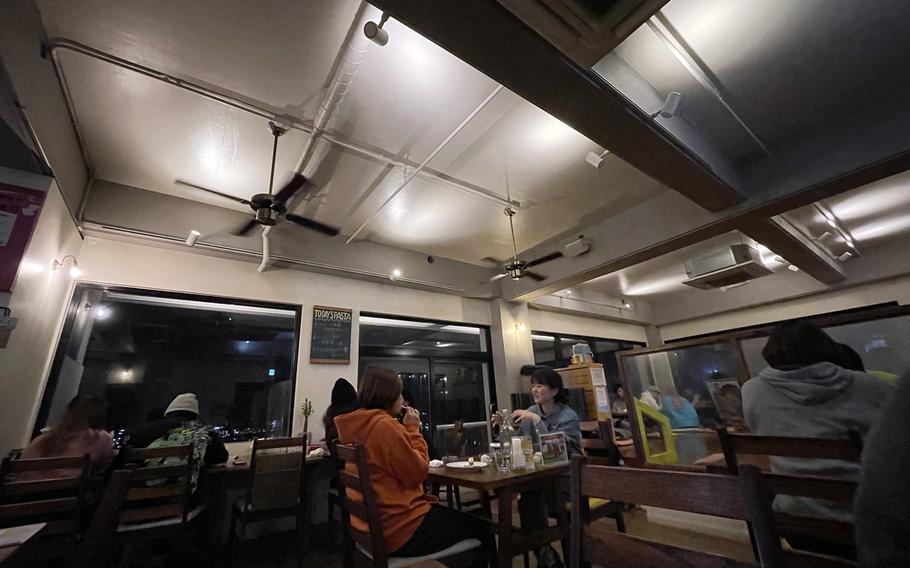 Kujira is an Italian restaurant in Okinawa city that seeks to use only the freshest organic and high-quality ingredients in its delectable homemade dishes. (Matthew M. Burke/Stars and Stripes) 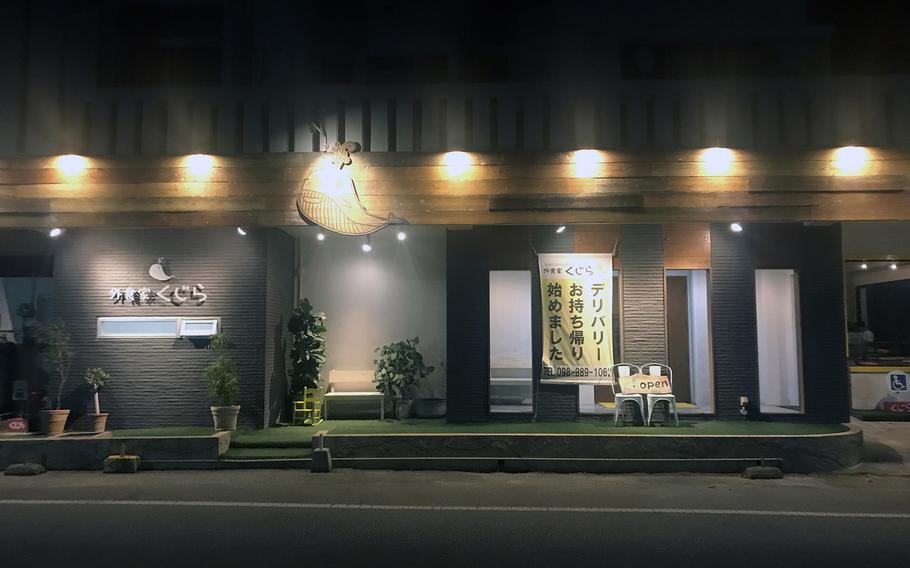 Kujira is an Italian restaurant in Okinawa city that seeks to use only the freshest organic and high quality ingredients in its delectable homemade dishes. (Matthew M. Burke/Stars and Stripes)

Ochiai moved to Okinawa and opened Kujira following the Great East Japan Earthquake on March 11, 2011. There are two locations, one in Yomitan and a second in Kitanakagusuku.

Everything at Kujira – from the pasta sauces and salad dressings to the pizza dough and desserts – is homemade. They serve only the freshest meats and fish.

Kujira tries to source its ingredients locally when available. The mushrooms come from Yambaru in northern Okinawa, and the shrimp from Ginoza in the central area, for example.

They focus on ingredients that are grown without chemicals and sweeten desserts with cane sugar, as opposed to its processed cousin, the website said. All dishes are made to order so they can take a little extra time during busy hours.

Kujira’s prices are surprisingly affordable. Sides range from 250 yen, about $1.89, for a house-made egg roll to 1,480 yen for a large order of fried tiger shrimp. A small order of shrimp is also on the menu for 750 yen.

Meals can range anywhere from 680 yen for a half order of house salad to 3,500 yen for an eight-course dinner. Most entrees fall somewhere between 1,000 and 2,000 yen. 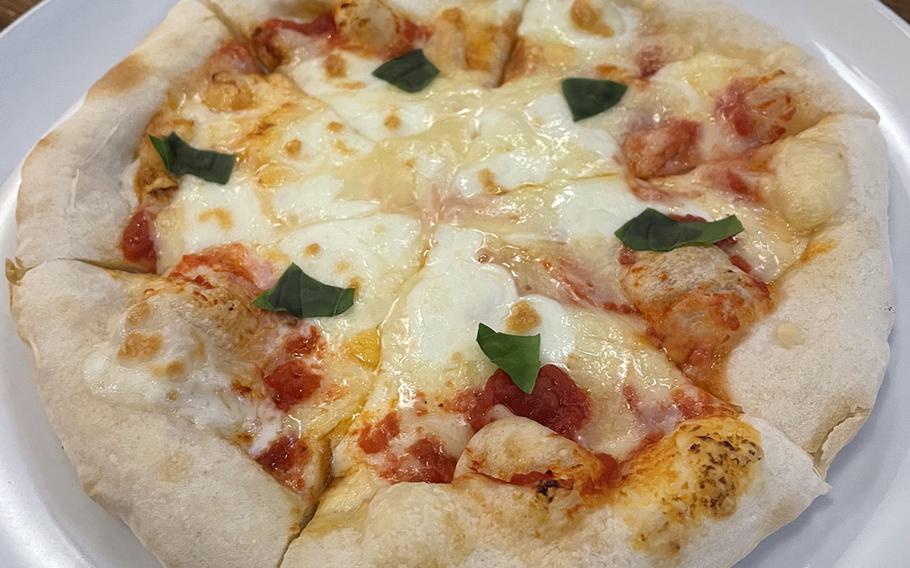 All of the dishes on the extensive menu range between 880 and 1,780 yen. Kujira also offers a wide variety of meat, fish and shellfish entrees. Kujira has an extensive selection of beer, wine, whiskey and other spirits. Locally inspired cocktails are also on the menu.

The kids meal, for children ages 10 and younger, includes tomato spaghetti, soup, fresh bread and a drink for 650 yen.

During a windswept evening in early January, Kujira was a beacon on the hill overlooking the glowing lights of the city below. It was warm and inviting with slightly dimmed overhead lighting that bounced off its soothing wood grain interior.

Kujira’s house-made fried egg rolls with uncured ham, mozzarella cheese and tomato sauce were rolled tight and delicious. They were crispy and the flavors popped thanks to the addition of some hot pepper-infused olive oil and a dusting of parmesan.

The margherita pizza for 1,000 yen tasted homemade, and each fresh ingredient sang out on my palate.

The capellini with lemon cream, “clam chowder style,” for 1,430 yen, was the real showstopper.

Being from New England, I couldn’t really see the connection between the dish and clam chowder, but the clams were clean, fresh and flavorful. The broth was delicious and wholesome with a hint of sweetness. 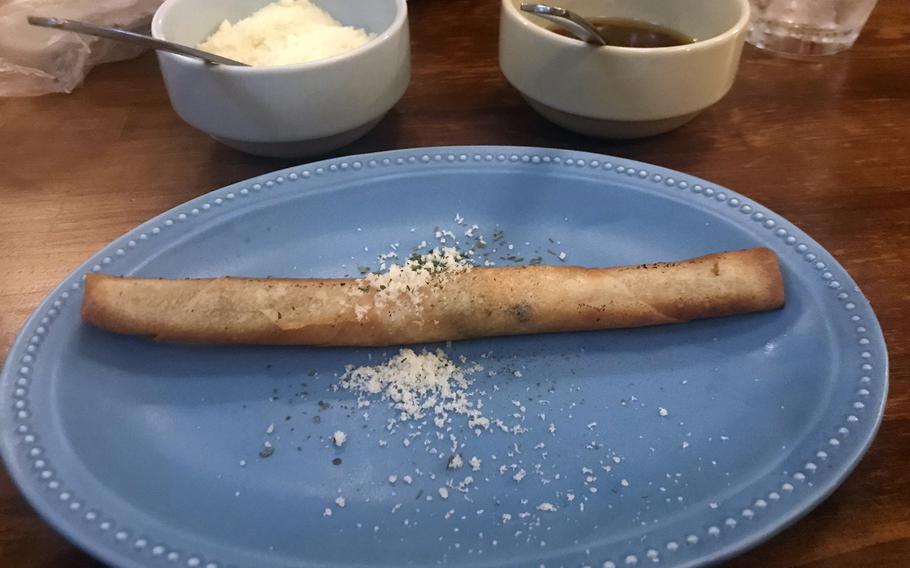 The pasta was cooked perfectly and didn’t stick together. The bowl was big enough to be shared.

To wash it down, I tried one of Kujira’s locally inspired cocktails, the Sugarcane Field, made with rum, amaretto, lemon, soda, grapefruit juice and what seemed like a touch of Blue Curacao. The layered drink was crisp, tasty and refreshing.

My friend tried the Sweet Potato Field with Beniimo plum wine, red wine and orange and grapefruit juices. The cocktail had good flavor but was very sweet. Each drink cost less than $5.

Kujira is easily one of the best restaurants in Okinawa city – a whale swimming among minnows. 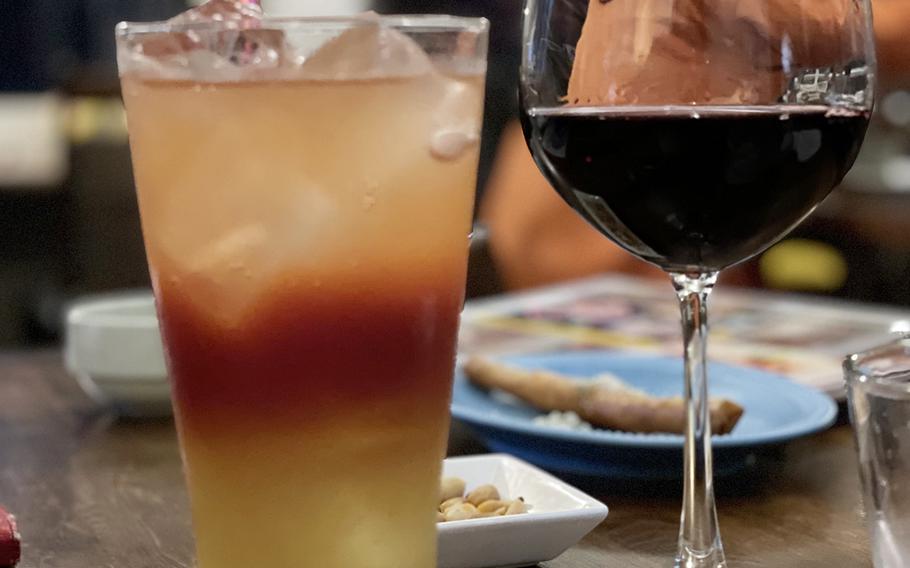 Information: 098-989-1062; Online: gaishokuya-kujira.com. Reservations can be made on the website.