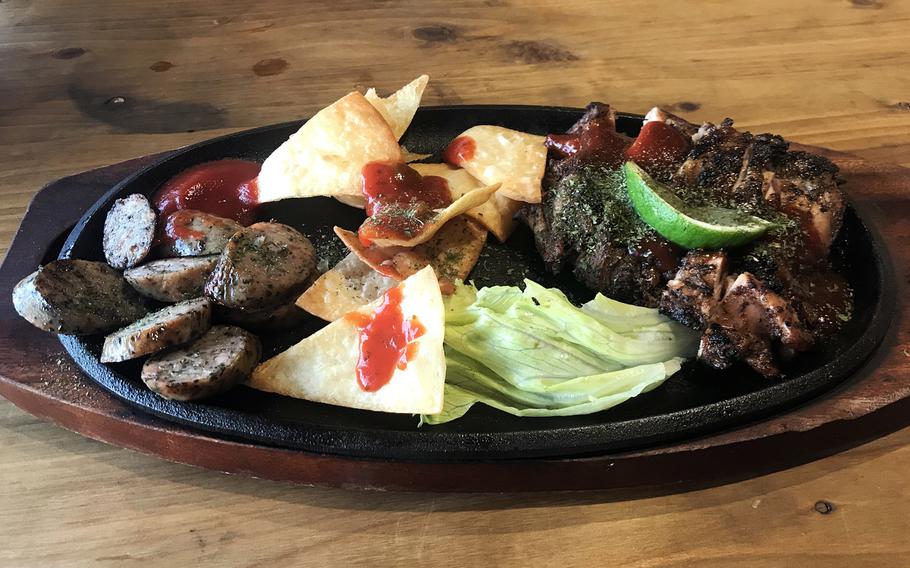 Panama Genjin Awase's jerk chicken, on the right side of the skillet, was moist and flavorful, topped with a generous helping of jerk spice. (Matthew M. Burke/Stars and Stripes)

When it’s too hot to stand over a scorching barbecue grill in the Okinawa summer heat, Panama Genjin Awase has the remedy.

This all-you-can-eat-and-drink restaurant features a wide-ranging menu that focuses on barbecue, small plates and cold beer – perfect for good times out with family and friends.

Panama Genjin is in the small seaside fishing district of Awase, a section of Okinawa city on the island’s east-central coast. It features prominently on the main thoroughfare, Route 20, with a giant sign that beckons you to “Grill & Beer.”

The exterior looks like a mashup of a Quonset hut and a Polynesian tiki bar.

At 2,980 yen per person, or about $21.85, patrons may eat and drink all they want. During the week, there is no time limit, but there’s a three-hour limit on Saturdays and before Japanese holidays.

It sounds like a great deal, but there are some rules.

First, each diner in a group may simultaneously order a maximum two dishes per person, so as not to overwhelm the kitchen staff, according to the menu. Latecomers to your party are held to the group time limit. 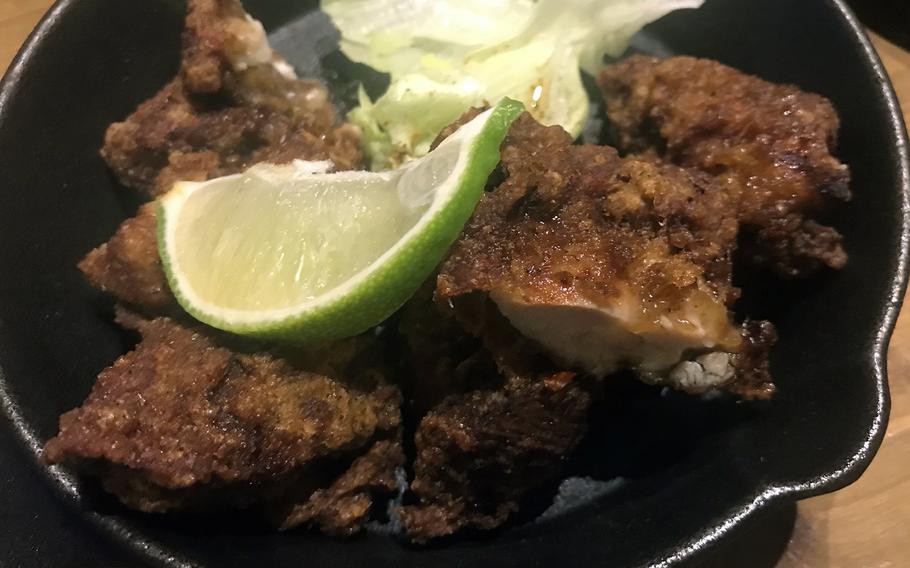 Patrons are not allowed to shout while drinking or chug any alcohol. Waste a substantial amount of food, and the restaurant will put you on blast on social media.

I visited Panama Genjin Awase with my family on a weekday evening. We sat outside, which offered a nice breeze after the sun went down. I made a highball with the pitcher of whiskey on our wooden table - the drinks are self-serve. 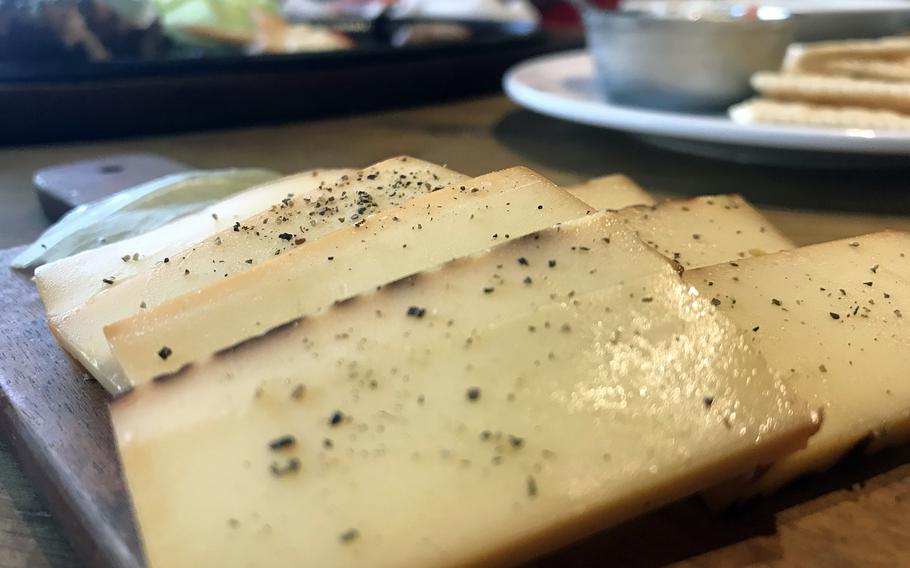 Smoked cheese is one of the many delicious appetizers offered at Panama Genjin Awase, an all-you-can-eat-and-drink eatery in Okinawa city. (Matthew M. Burke/Stars and Stripes)

We started off with some hors d'oeuvres: edamame, crackers with guacamole, tomato slices and smoked cheese. We graduated to Panama Genjin Awase’s specialty, jerk chicken, which arrived on a skillet with some sliced sausage and tortilla chips.

The chicken was succulent and delicious. However, it appeared as if the jerk spice was added to the chicken after it was cooked rather than before. That didn’t affect the taste, but the spices weren’t cooked into the meat for that jerk crust. 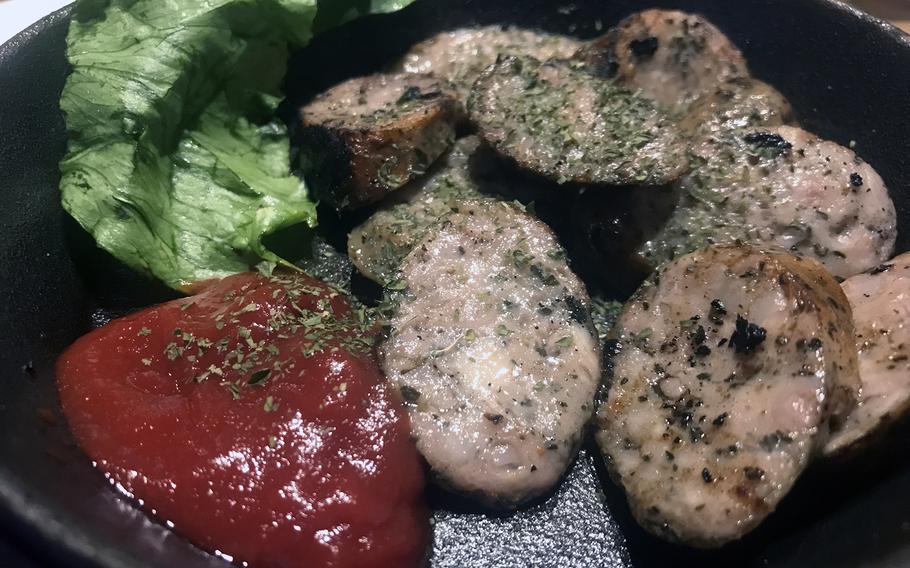 The smoked sausage at Panama Genjin Awase in Okinawa city was tender and flavorful. (Matthew M. Burke/Stars and Stripes)

The sausage was tender, flavorful and just salty enough to inspire thirst, which was welcome.

The “Mexican salad” in a tortilla bowl was cool and refreshing with fresh vegetables, bursting with flavor. It was big enough to offer everyone a few bites, which sufficed. Then we tried a salad topped with imitation crab, which was equally tasty.

My son enjoyed the French fries, which were crispy and came with copious amounts of ketchup. Last, we tried the jerk fried chicken. Again, a tasty dish, but it lacked the cooked-in jerk spice. 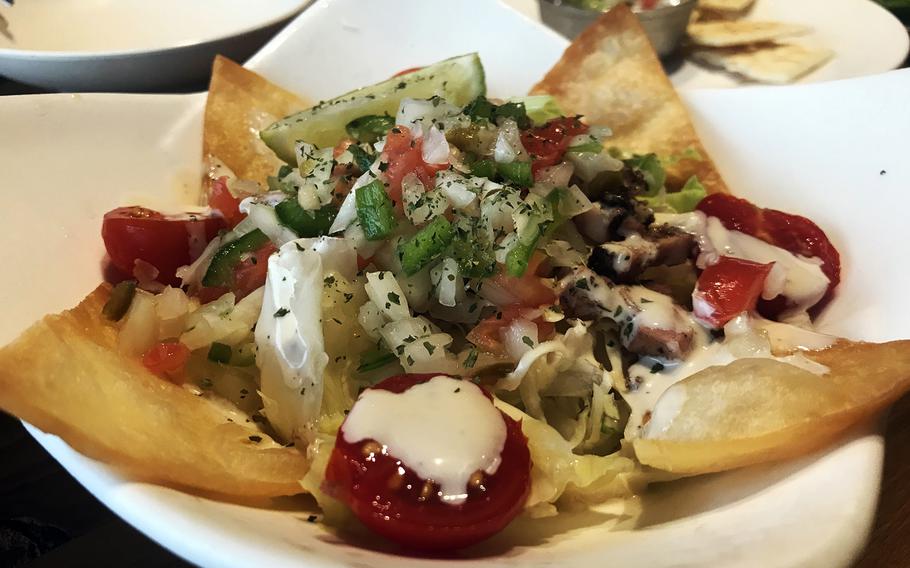 The Mexican salad at Panama Genjin Awase in Okinawa city is a crowd pleaser. (Matthew M. Burke/Stars and Stripes)

The drink menu is enormous, with all the soft drinks and non-alcoholic drinks one could want. The restaurant also has a wide variety of beer, highballs, chu-hi, umeshu (a Japanese plum wine), shochu and the locally made liquor of choice, awamori. Habu sake shots are an extra at 500 yen a piece.

The only drawback to Panama Genjin Awase is that the menu is in Japanese only and seats fill up fast even during the week, so reservations are recommended.

Panama Genjin Awase is very much a cultural experience to be savored, like an invitation to a barbecue feast where you are the honored guest. 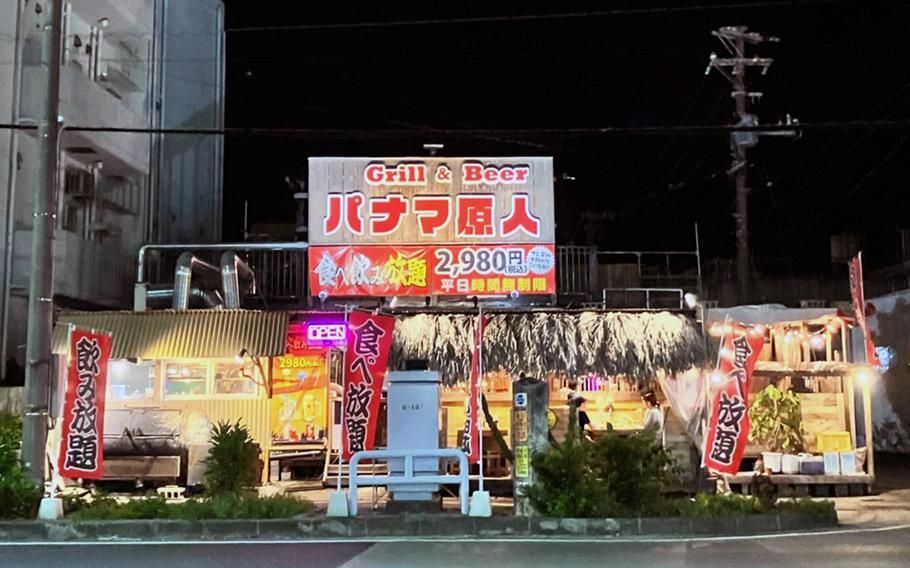 Eat and drink to your heart's desire at Panama Genjin Awase in Okinawa city, Okinawa. (Matthew M. Burke/Stars and Stripes)

Directions: On Route 20 at its intersection with Awase Sanchome, next to the Awase Family Mart.

Prices: 2,980 yen per person, plus add-ons for not included items.