Krispy Kreme or Mister Donut: Choose your tasty treat for Halloween in Japan 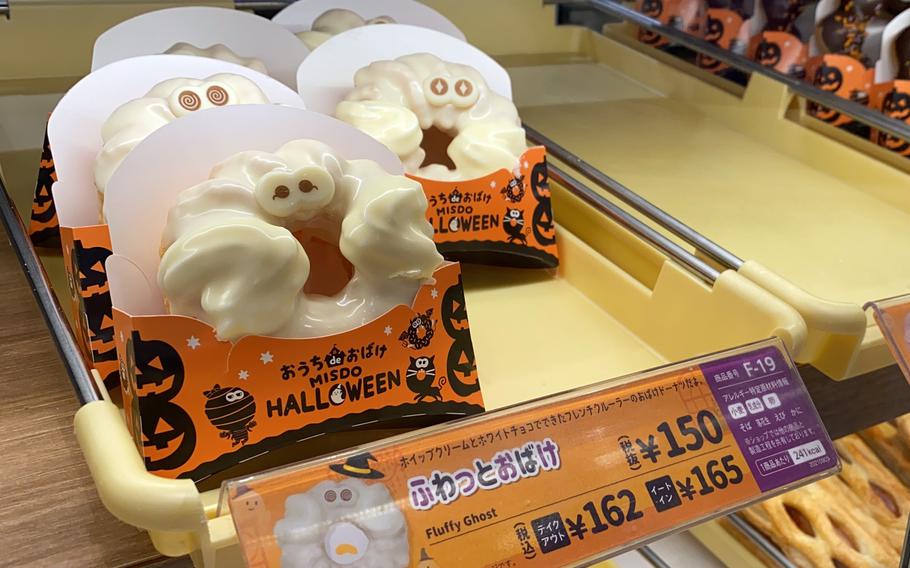 Buy Photo
The Fluffy Ghost from Mister Donut in Japan is a French cruller dipped in buttery white chocolate. (Aaron Kidd/Stars and Stripes)

Two prominent doughnut chains in Japan — Mister Donut and Krispy Kreme – are selling autumnal flavors and Halloween designs to get you in the holiday’s spirit.

Fluffy Mummy features a layer of whipped cream sandwiched in a yeast doughnut and a coating of hardened, strawberry-flavored white chocolate. Pink Frankenstein has hard, pink frosting on a chewy fruit stick that resembles a dry fruitcake.

The Pon de Choco Devil is a chewy mochi doughnut covered in chocolate and sprinkles. The Makuro Chocolate Cat is made of a moist cake doughnut sandwiching a layer of whipped cream. It is coated in chocolate with white chocolate “whiskers” and chocolate cat ears.

And the Fluffy Ghost is a French cruller doughnut dipped in buttery white chocolate.

All of Mister Donut’s Halloween treats are decorated with eyes of white and milk chocolate. Its sweet potato, or ube, flavored treats are also popular around fall.

Individual Halloween doughnuts cost 150 yen, or about $1.30, while a set of five that includes a haunted house-themed gift box costs 810 yen. 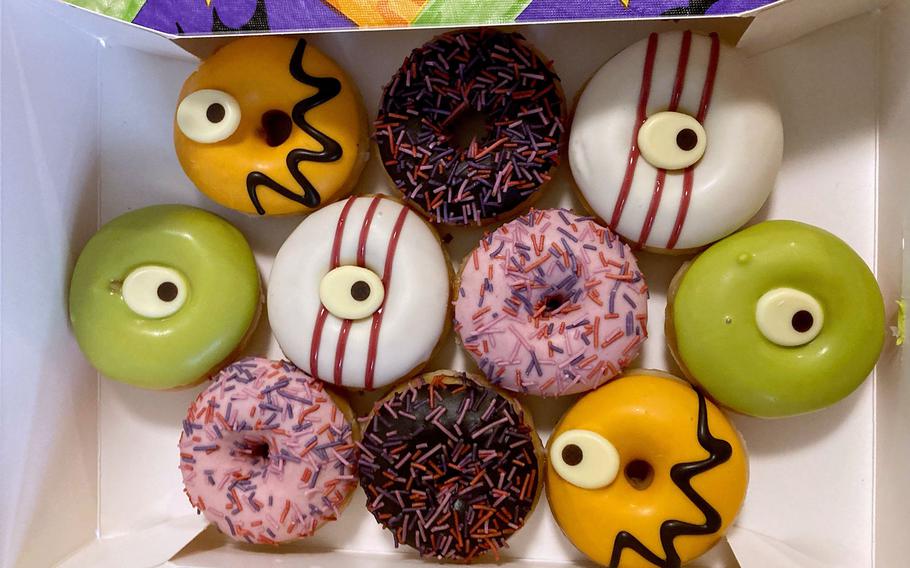 Of the three, the skull doughnut tastes less sweet than a traditional American doughnut.

The “minimonsters” are a pumpkin monster covered in orange-colored white chocolate with a strong vanilla flavor; a green monster, which has green-colored white chocolate and a subtle grape flavor; and a white monster, which has a faint marshmallow flavor and a few lines of raspberry jam piped on top. All three minimonsters have a white- and milk-chocolate eyeball for decoration.

Minidoughnuts cost 517 yen for three, 1,441 yen for a packet of 10 and 2,268 yen for 20. Individual full-sized doughnuts cost 237 yen. The minimonster doughnuts are available only in sets.

Krispy Kreme has at least 20 locations in the greater Tokyo metro area, from Chiba to Shibuya and Saitama, including Kanagawa prefecture.

For lovers of adventure or of simple variety in their doughnuts, Mister Donut is the way to go. If you yearn to celebrate Halloween with foods that remind you of America, Krispy Kreme may be the better choice.