Stock these essential items from Japanese grocery stores in your pantry 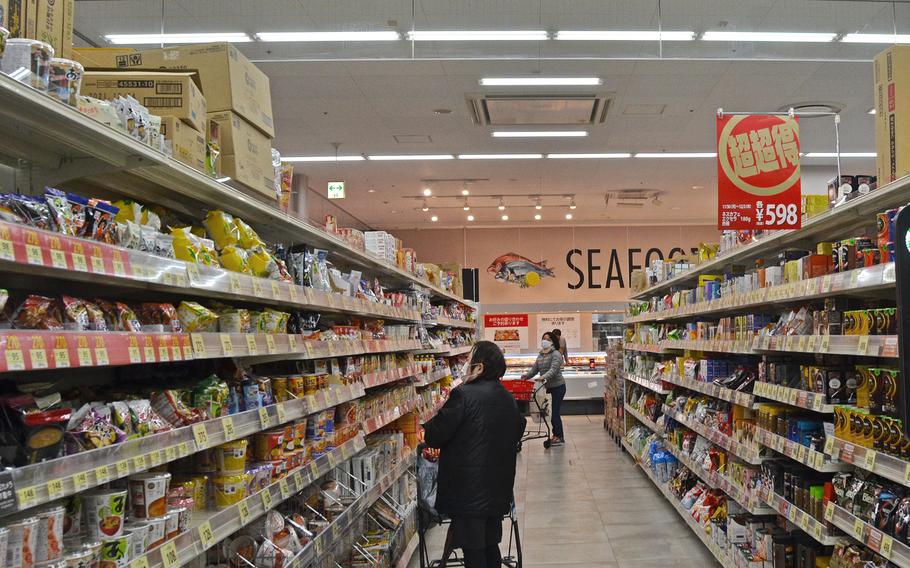 Cooking at home with authentic local ingredients is an alternative way to enjoy Japanese food during the coronavirus pandemic. (Erica Earl/Stars and Stripes)

Immerse yourself and your family in Japanese culture while still social distancing and staying home during the coronavirus pandemic by sampling local cuisine in your own kitchen.

The first step must be a trip to a Japanese grocery store, still an essential activity. My friend Michele Tanabe, an English teacher and Japan Air Self-Defense Forces spouse, and I assembled a list of quintessential items to get you started. 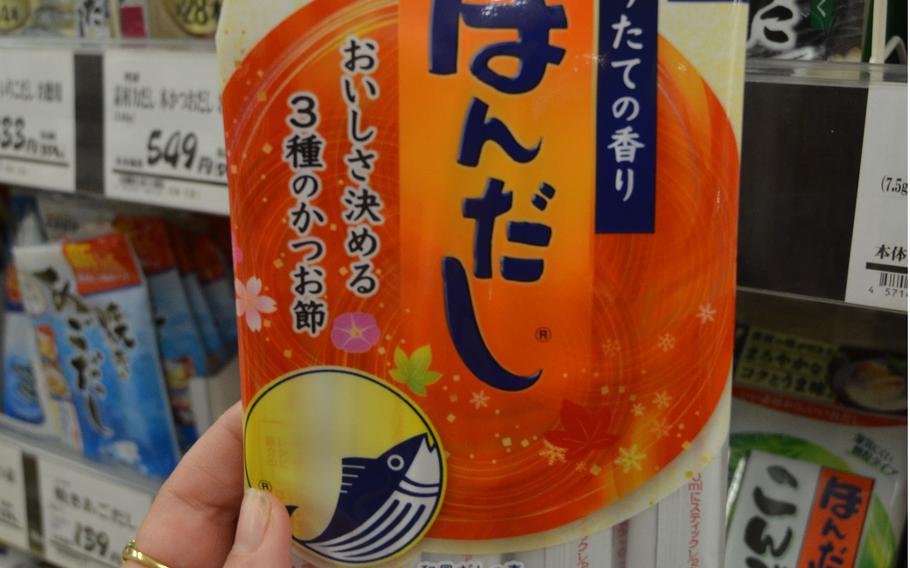 Dashi powder is a key ingredient to make instant dashi broth, a base for much classic Japanese cuisine. (Erica Earl/Stars and Stripes)

This is a quick and easy way to make soup stock and saves a lot of time in the kitchen. It typically comes in pre-packaged sticks with instructions for the powder-to-water ratio. The instructions also typically include pictures, adding ease. The dashi broth is a base ingredient for many Japanese culinary classics such as miso soup, udon and tempura dishes, so having an instant option will make these recipes a lot easier. Dashi powder can be found in the spices and dry mix aisles.

Most grocery stores sell kits that include everything you need to whip up a bowl of this noodle stir-fry dish. All you need to do is mix everything that comes in the package and heat. Tanabe referred to these ready-made meals as “the bachelor food of Japan,” but noted they are also great for busy families or those whose kitchens have limited prep space. For the more tentative palate, yakisoba is popular festival fare. These kits can be found in the pre-made meal section of most Japanese grocery stores. 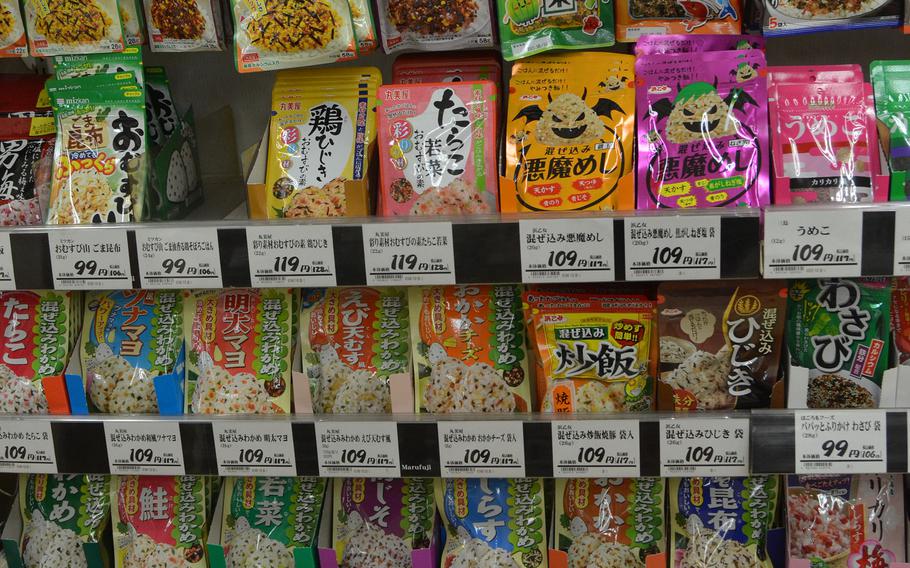 Shopping at a Japanese grocery store can be intimidating at first, but classic items like furikake can be a good place to start. (Erica Earl/Stars and Stripes)

Rice is a staple in most Japanese meals, so this dry condiment, meant to flavor rice, is a must. Even if you are not a big fan of rice, you may become one by finding a furikake flavor you like. Choices range from plum and wasabi to fish and egg. Furikake is so popular that it often has its own dedicated section in stores but can also typically be found near the rice.

This clear noodle soup is a good option for children or picky eaters. Usually found near ramen and other dry soup mixes, this low-sodium choice is popular among parents because of the simple flavor and cute packaging, often featuring cartoon characters. If your family is feeling more adventurous, a wealth of recipes online will elevate harusume soup, but it is also tasty and quick to make as-is.

Rare is the Japanese household that does not have sesame oil on hand, Tanabe said. She recommends starting with light sesame oil; it is more versatile and a less robust flavor than the dark variety, although both have a distinct, nutty aroma. A variety of traditional Japanese recipes require sesame oil, including curries, stir fry, dressing and desserts.

A curry sauce mix that is sold as a block, Golden Curry is considered a winter essential for many Japanese families, Tanabe said. It is especially popular around Christmas. Most grocery stores in Japan have an entire aisle dedicated to curry blocks, with Golden Curry being one of the most common selections. Flavors include mild or spicy with vegetables as well as seasonal picks like apples and honey. 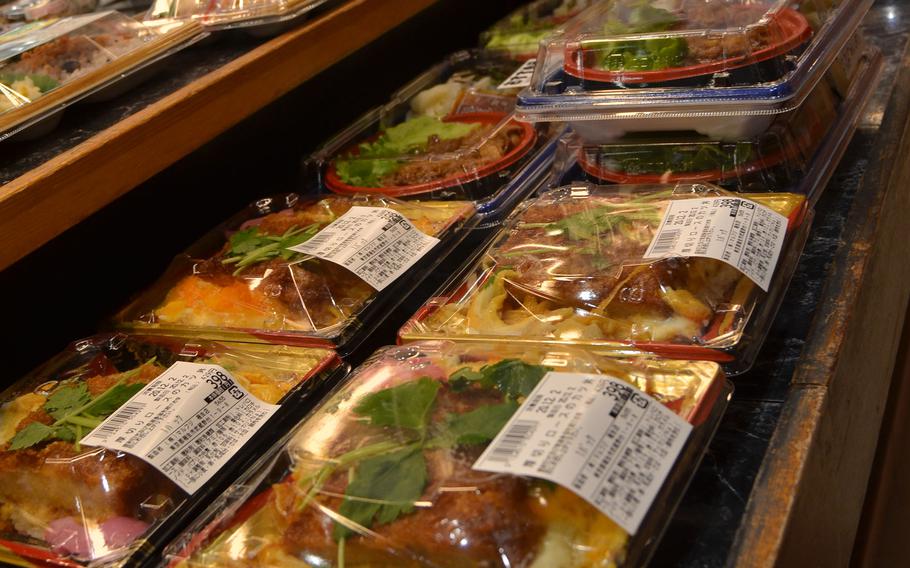 Grab-and-go dinner items like katsudon can be a fun way to enjoy Japanese cuisine while practicing social distancing. (Erica Earl/Stars and Stripes)

This popular fried pork dish comes in bento options that require no prep and can be carried away from the deli section in a box ready to be heated. Tanabe described katsudon as “a foreign-friendly dish that still feels like you are being adventurous.”

Most fruits and vegetables are the same as what you would find in American markets, but there are a few unique to Asia, including the lotus root. A cross between a potato and a water chestnut in appearance and flavor, the lotus root has a crunchy and starchy texture and a lot of recipe potential. It is usually served in stir fry but can also be served boiled and salted. Just don’t eat it raw, as it may taste unpleasant.

Nikuman is the Japanese name for the Chinese dish baozi, a doughy bun typically filled with meat, although vegetarian options are also available, just not as easy to find. Nikuman can be found both fresh and frozen in most grocery stores. These are great options to pack for school lunches or to make when you are in the mood for a no-fuss meal; just pop them in the microwave or oven. Common flavors include pork, beef and pizza. Nikuman is a common street food and is frequently sold at festivals.

Miso in a tube

Miso is another must-have ingredient for most Japanese cuisine. A fermented paste usually used for soup, miso is also used in many recipes as a flavoring agent due to its strong salty taste. Tanabe suggests the tube version as it has a longer shelf life, as a little goes a long way with miso.

Congee rice porridge, with a consistency of liquid grit, is long revered as a dish that brings about good health, making it a good choice for 2021. Tanabe said congee rice porridge is a common choice for Japanese to eat when one is feeling ill. A simple choice for breakfast, lunch or dinner, congee can be served savory with seasoning and meat mixed in or sweet with fruit mixed in, commonly plum. Congee is often found in the soup aisle.

Nori, or dried seaweed sheets, are a must for making your own sushi, wrap rolls or onigiri. It can also be used as a crunchy topping for salads or pasta dishes. Produced in sheets since the Edo period in the 1600s, nori is an ingredient that contributes to some of Japan’s most famous dishes.

Condensed milk in a tube is so popular that if you get to the grocery store later in the evening, you may find the shelves nearly cleared of it. This runny, sweet milk is often squirted over fruit or spread on toast. It is also a sweetener for desserts and baked treats. While not unique to Japan, it is a common ingredient. The tube packaging also makes for easier storage than a can. You can usually find these in the baking supplies section.

You can keep this traditional festival choice right in your own freezer. Taiyaki, a fish-shaped, waffle-like cake, not only looks adorable and photographs well, but is a choice the whole family might enjoy. Taiyaki is a sweet treat most often filled with red bean paste, but it can also be filled with chocolate, custard or ice cream. Unless you are eating the ice cream variety, I would recommend allowing the taiyaki to thaw, then heating it in a frying pan until it is golden brown. Taiyaki is a must-try in Japan that often gets overlooked as traditional Japanese fare back in the United States. Frozen taiyaki can be found in the ice cream and confectionary aisle. 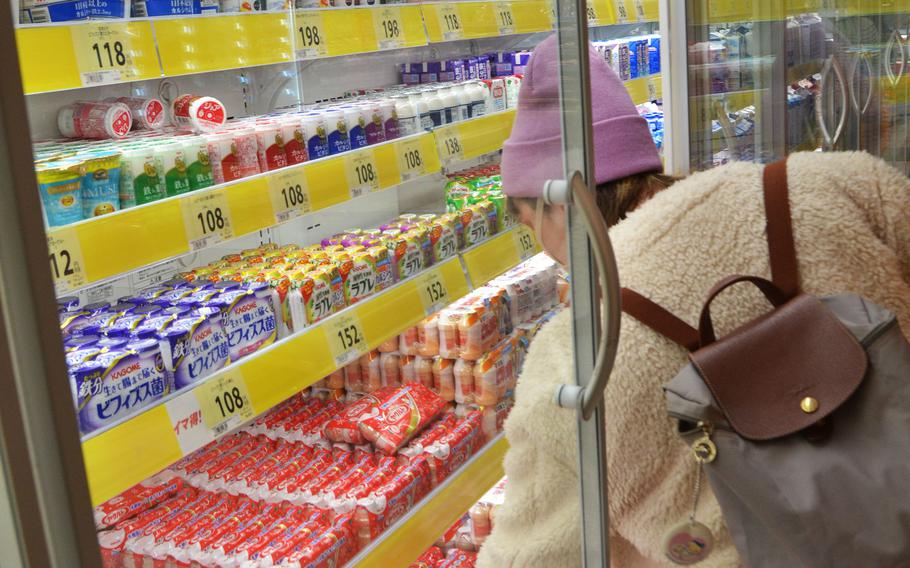 The dairy aisle of most Japanese grocery stores boasts a variety of delicious probiotic drink options, such as Yakult, a milky yogurt drink with a vanilla citrus flavor. (Erica Earl/Stars and Stripes)

Billed as a probiotic, Yakult is a sweetened, milky yogurt beverage. It is a great item to have on-hand as a snack. It has a citrusy vanilla flavor and is a delicious go-to for both children and adults. Yakult is in the dairy aisle.

I saved my biggest personal vice for last. I can never make a trip to the store without coming home with melon pan. It is a sweet bread with a very distinctive pillowy top with a crisscross design to resemble a melon, although it is not actually melon flavored. This soft bread with a crisp outer shell is good with butter and jam, although I prefer to eat mine plain. Other varieties of melon pan come filled with custard, strawberry filling or chocolate chips. It can be found in the bakery section or bread aisle of must grocery stores.