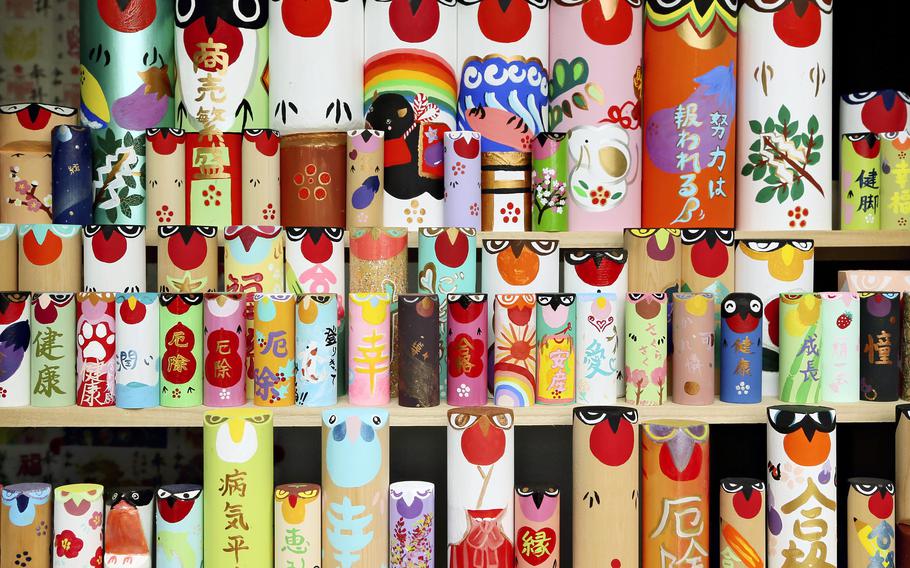 A statue of Sugawara no Michizane as a child holding a surfboard stands in the precincts of a shrine overlooking Suma Beach, a spot crowded with beachgoers during the summer.

Sugawara no Michizane, a powerful aristocrat who lived in the late 9th to early 10th century, was deified after his death and is widely worshipped throughout Japan as Tenjin, the patron deity of academics. Because of the popularity of this deity, Tsunashiki Tenmangu shrine in Kobe is known to many locals as Tenjin of Suma, and many students visit to pray for success on entrance exams.

But why does the patron deity of academics hold a surfboard? Is it because the shrine is near a beach?

Michizane was an influential politician and scholar in Kyoto, but he was transferred to Dazaifu in the Kyushu region because of a false rumor that he was plotting treason. It is said that as he was sailing to Kyushu, he was met with rough seas caused by a storm off Suma, and he took shelter in the area. Legend has it that the local residents made a round seat cushion out of rope to serve as a rug for Michizane and there entertained him.

This episode is the origin of the shrine’s name, Tsunashiki, which means “to lay a rope” in Japanese.

The Tsunashiki Tenmangu shrine was founded in 979, giving it a relatively long history even compared with the many other shrines throughout Japan named Tenmangu or Tenjin shrine that celebrate the scholar.

But despite this lofty pedigree, Tsunashiki Tenmangu is home to many quirky and objects. The statue of Michizane holding a surfboard is one such example. It takes for its inspiration the legend around the scholar overcoming rough seas, says Keita Kunogi, the 56-year-old priest of the shrine.

“He’s praying that we may ride the waves of life,” said Kunogi.

In the stone pavement leading to the precincts of the temple, there are two surfboard-shaped stones said to be lucky charms; if you stand on these stones, you will be able to catch a good wave, according to the shrine.

In front of the main shrine building, there is an artistic reproduction of Michizane’s legendary round seat of rope, but even more eye-catching is a giant purple eggplant. It is also a lucky charm, touted to make any wish come true if a visitor sits on it, according to the shrine. 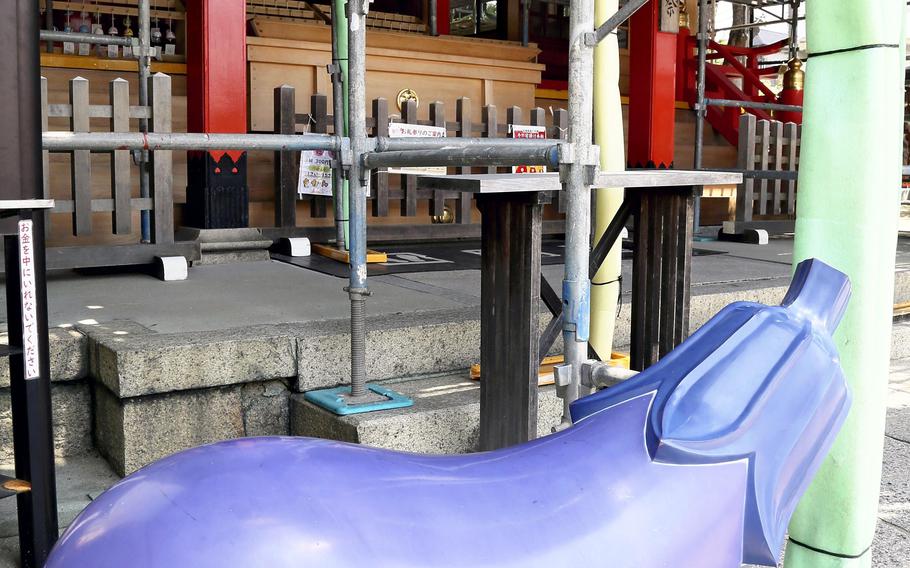 This giant eggplant statue, touted to be able to make wishes come true, is representative of the humorous spirit welcome at the shrine. (Japan News-Yomiuri)

“Eggplant blossoms bear fruit without any wasted energy. You will achieve your great desire,” said Kunogi, laughing at a pun on the Japanese word for eggplant and clearly enjoying the joke.

More than 50 colorful wooden statuettes of uso birds, or Eurasian bullfinches, are lined up at the amulet and lucky charm stand. These, too, come from a legend about Michizane - when he was attacked by a swarm of bees, he was saved by the bird.

The statuettes are popular for their social media appeal, and there is no end to the number of people snapping pictures of them. They have been made by hand by the staff of the shrine for the past five years.

The shrine got its upbeat atmosphere in the aftermath of tragedy: The 1995 Great Hanshin Earthquake caused severe damage to the shrine, including causing the collapse of the main shrine building and the torii gate. Kunogi had taken over as shrine priest at the age of 29, a year before the earthquake. He was determined to offer upbeat topics for conversation, trying to cheer up the community and pull it out of its dejection. The shrine staff began to devise ways to attract more visitors, even as the shrine underwent major renovations.

“I want people to feel close to the shrine, and I hope those who visit our shrine feel motivated to do their best again,” Kunogi said.

Visitors to shrines and temples often get a stamp called a goshuin to commemorate the visit. Tsunashiki Tenmangu has about 70 different goshuin; it changes the design every month.

The shrine is also a prime spot during the Shichi-go-san festival, celebrating the growth of children. Young visitors dress up in clothes from the time of Michizane or in junihitoe, the formal attire of ancient female nobles.

I can’t wait to see what kind of playful spirit I will encounter on my next visit.