Okinawa, 50 years since return: Tourist-vitalized islands thrive, though not everybody is happy 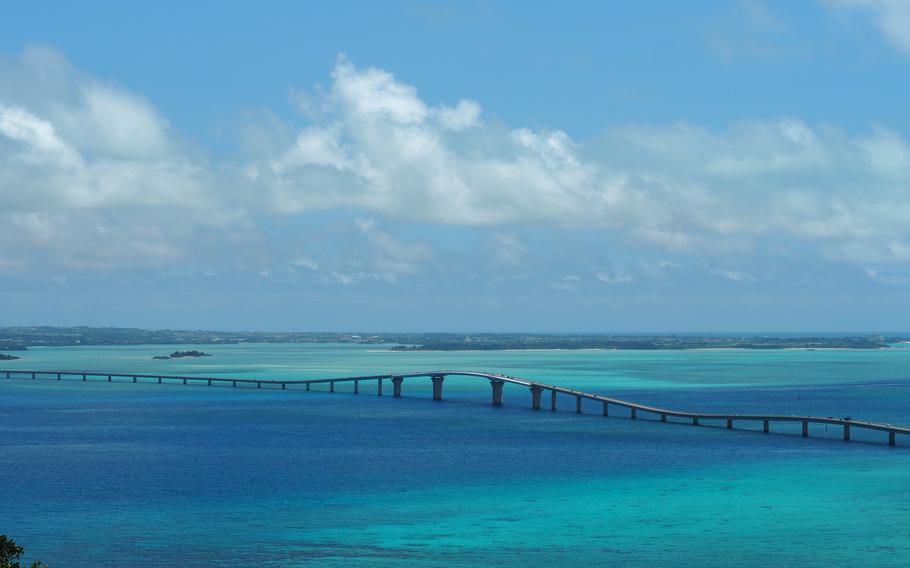 Irabu Island and the Irabu Bridge, as seen from the Makiyama Observatory Deck on Okinawa, Japan. (iStock)

Since reverting to Japan on May 15, 1972, Okinawa Prefecture has become a major tourist destination. However, work remains to improve its economic self-sufficiency and standards of living.

The Irabu Bridge connecting the islands of Miyako and Irabu in Miyakojima, Okinawa Prefecture, opened in 2015. The 2.2-mile-long structure is the largest toll-free bridge in Japan.

"[After the bridge opened] our sales tripled and the area's specialty, Shio Chinsuko cookies, disappeared from the shelves," recalled a women who works in a nearby souvenir shop.

By fiscal 2018, visitors to Miyakojima had doubled in number to more than 1 million a year. But tourism has transformed the tranquil landscape of sugar cane fields, and the lives of the city's residents.

A hotel funded by a mainland Japan-based company is currently being constructed in the Sawada district of Irabu Island. The Miyakojima municipal government's city landscape ordinance restricts beachfront buildings to two stories, but city officials nonetheless green-lighted the four-story hotel, saying the building takes the surrounding scenery into consideration.

"A building of that height will block the view of the sunset," said 64-year-old Mitsunori Kawamitsu, who heads a local neighborhood association. "Even though the area is developing economically, we're losing precious things inherited from our ancestors."

A separate villa-type hotel recently started operating in the district, and most of the land near the beach has been snapped up. Land prices in the city have risen and the average monthly rent for a single-room apartment -- previously around 30,000 yen to 40,000 yen -- soared to as much as 100,000 yen ($765) at one point.

In some cases, apartment landlords and tenants have gotten into disputes because landlords have tried to raise the rent. "Even though tourist numbers have gone up, the prefecture's wage levels haven't changed," said a local resident in his 50s. "If things go on like this, it will become impossible for locals to keep living on this island."

Prior to being returned to Japan in 1972, Okinawa operated under U.S. stewardship. As cheap foreign products were readily available in the prefecture, the region never developed a manufacturing industry. Rather, it was the tourism industry that drove the local economy.

While under U.S. control, the prefecture ran "Battle of Okinawa memorial trips" to attract tourists from mainland Japan. In 1975, three years after Washington relinquished control of the islands, the Okinawa International Ocean Exposition was held: The event triggered land acquisition on the west coast and other parts of Okinawa's main island, as well as the opening of a number of hotels operated by companies on mainland Japan. In fiscal 2018, more than 10 million tourists visited Okinawa Prefecture, putting it on a par with resort islands such as Hawaii in the United States.

However, some say that tourism-focused development has stripped the prefecture of its unique charms. In a survey conducted by the prefectural government in fiscal 2020, tourists flagged the "beautiful ocean," and the "landscapes" as their favorite things about the area.

But the reality is, areas in more than 300 locations have been reclaimed. Shallow waters with coral reefs have been replaced by hotels and commercial facilities. As a result, the prefecture's size has expanded by some 14.5 square miles, roughly equivalent to 800 Tokyo Domes.

Some people have begun to seek ways to balance tourism and the traditional Okinawan way of life.

Each year, about 500,000 tourists visit Taketomi Island, roughly 250 miles southwest of the Okinawa's main island. The island's population of about 350 residents continue to carry out traditional rituals and ceremonies while living in houses with red-tiled roofs. Tourists traverse the island in water buffalo-pulled carriages.

There have been some attempts by outside companies to develop Taketomi Island as well. Now, residents are working toward buying back areas of land. To fund the initiative, locals ask tourists for a 300 yen "entrance fee" at the ferry terminal and other locations. The donation is purely voluntary, and those who opt to pay receive gifts such as island vegetable seeds.

"Tourism is important, but if it goes too far, the island's culture, nature and charms might be lost," said Shosei Uchimori, the 62-year-old director of a local community hall, which is a self-governing body on the island. "We want to keep living here while upholding the spirit of the island."