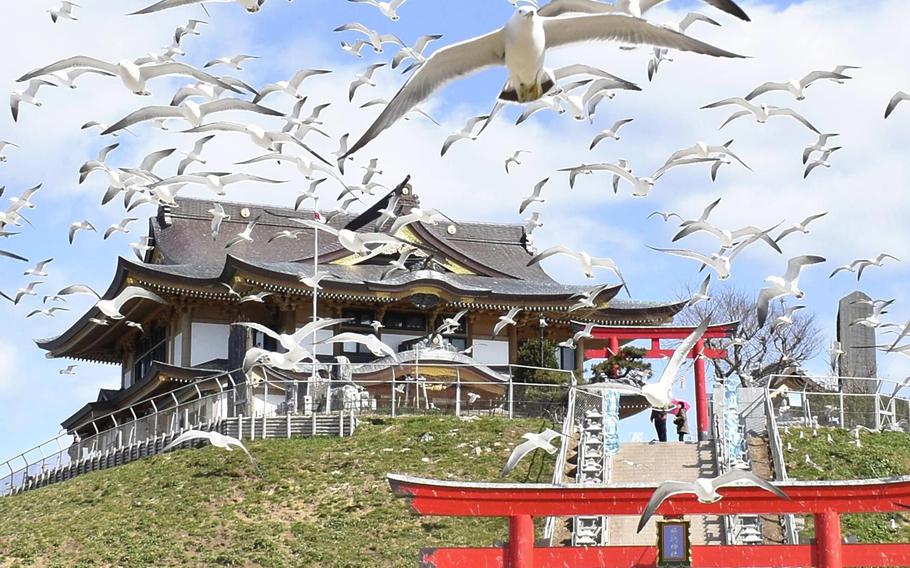 March marked 100 years since Kabushima island in Hachinohe, Aomori Prefecture, was designated as a natural monument. Known as the nation's largest breeding site for black-tailed gulls, the island has gone through tough times in recent years, including the Great East Japan Earthquake and the destruction by fire of a shrine.

However, local residents and others have worked hard to overcome these hardships, protecting and promoting the island. "We want to make this a place where birds and people can continue to coexist for the next 100 years," a local official said.

Kabushima stands about 55 feet above sea level. It used to stand alone but was connected to the mainland via reclamation during wartime. Black-tailed gulls flock to Kabushima, partly because sardines, squid and other creatures that they feed on are abundant in the sea around it.

The island was designated as a natural monument on March 8, 1922.

About 30,000 black-tailed gulls migrate to the island in February and March every year, laying eggs and raising chicks there. The birds depart around early August. Kabushima Shrine, located at the summit of the island, is a popular sightseeing spot where visitors can watch parent birds incubating their eggs from a close distance.

Kabushima island has experienced two key crises during the past 11 years. The first was the earthquake on March 11, 2011, in which tsunami as high as 17 feet hit the island and the waters around it were filled with debris.

A tourist information center was flooded and had to be demolished. However, the Hachinohe municipal government quickly responded and decided to construct a new Kabushima Rest Area in the same year. The new facility includes an area describing the damage from the earthquake.

"The disaster was a great shock; my home was also damaged. However, reconstruction has progressed and we can now welcome many tourists," said Kenichi Sugimoto, 73, the head of the Same tourism association that operates the rest house.

The second crisis came early in the morning of Nov. 5, 2015, when a fire destroyed Kabushima Shrine. Robes for its Shinto priests and ritual implements were all lost, devastating chief priest Toshio Nozawa, 71, and his wife, 71-year-old senior priest Toshiyo.

However, donations were soon received from local residents and companies that wanted to reconstruct the "shrine of black-tailed gulls." Construction work was conducted with care not to disrupt the birds as they laid eggs and raised their young.

A new shrine building was completed in 2020, about four years after the fire.

The couple said the black-tailed gulls have laid eggs and raised chicks in the same place over the past 100 years, adding that they want to protect it throughout the future.