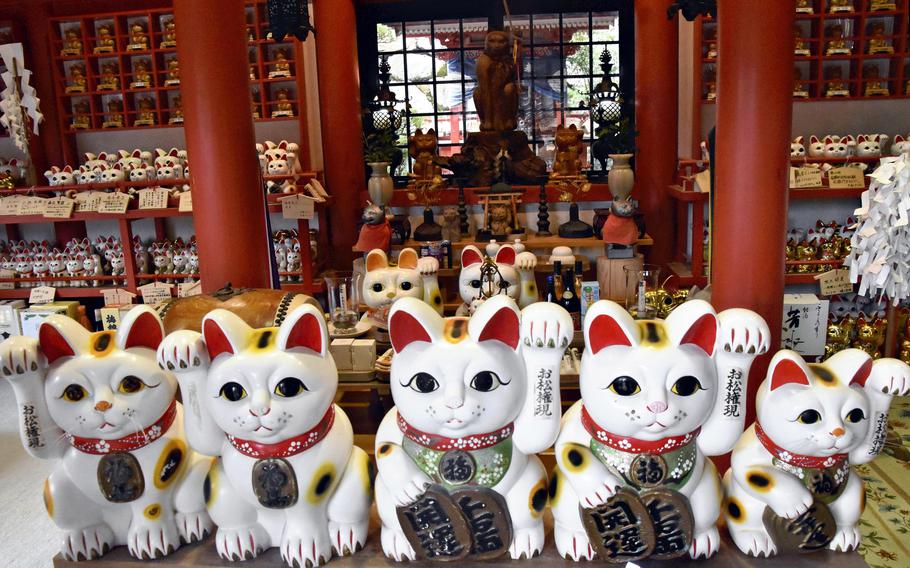 A shrine in Japan's Tokushima Prefecture has about 10,000 beckoning cats on its grounds, drawing in not only cat lovers, but many students hoping to pass their exams.

What blessings does the shrine offer? And why are there so many cat statues at the shrine in the first place?

The legend of a ghost cat lays at the heart of the shrine's origin.

Omatsu Daigongen Shrine is in Anan, Tokushima Prefecture, an about 50-minute drive from Tokushima City along a mountain road.

A 6-foot-tall beckoning cat greeted me at the side of the main gate.

I followed cat footprints carved into the stone pathway and was suddenly struck by the feeling I had heard a cat meowing somewhere. Maybe it was just my imagination.

Beckoning cats are not the only cat statues on the grounds. There is a cat statue near the main hall said to heal any illness if you stroke the same part of the cat's body as where the illness lies in your own body.

Stone statues of unique cats line the paths in the shrine. The seven deities of good fortune also have a cat motif, each donning adorable smiles. A Buddha statue is modeled after the cat, with a face of indifference. There is also the Fudo Myoo -- one of the Buddhist deities -- cat statue with a graceful air to it. 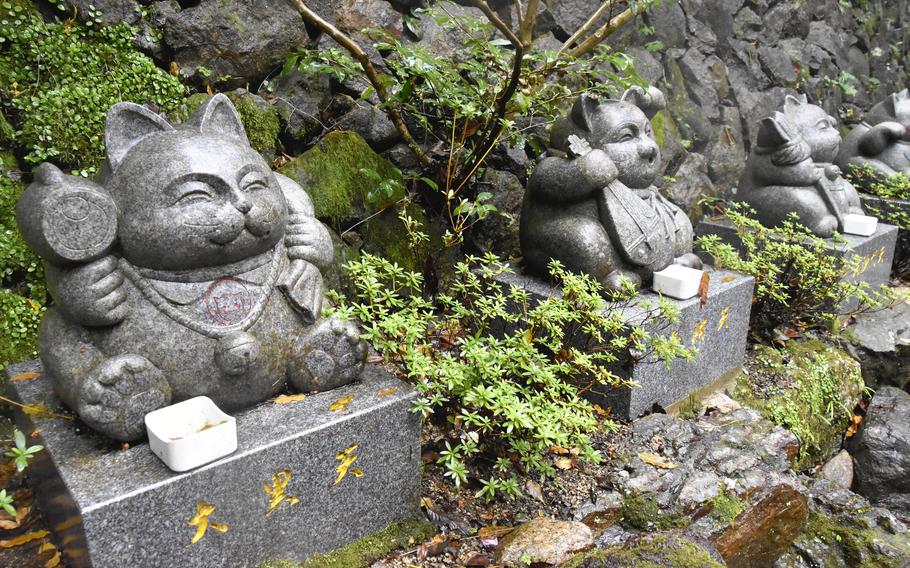 The seven cat deities of good fortune line the path around the shrine’s grounds. (Japan News-Yomiuri)

It was as if the shrine could not decide between Buddhism and Shinto, but such a mixture of beliefs has been common since ancient times in Japan.

A woman named Omatsu from the Tokugawa Shogunate era in the 17th century was enshrined here following a mysterious story from that time.

There was a village near the shrine suffering from a poor harvest. The leader of the village was named Sobee, the husband of Omatsu. In an attempt to save everyone in the village, Sobee borrowed money from local millionaire Nogami Sanzaemon, using his own rice fields as collateral. Sobee returned the money, but could not get testimony from Sanzaemon that he had, and then Sobee died of illness.

Sanzaemon insisted the money had not been returned, and Sobee's rice fields were confiscated.

Omatsu appealed to the local magistrate's office, but the magistrate did not listen to her after having received a bribe from Sanzaemon.

Omatsu then appealed directly to the lord of the Tokushima domain. However, at that time, such a direct complaint was illegal and punishable by death, no matter the reason. Omatsu was thus executed along with her calico cat.

After that, a ghost cat appeared around Sanzaemon and the magistrate, followed by the mysterious deaths of their family members. Both houses eventually disappeared.

Local people said it was a curse brought on by Omatsu and her cat, and they built a shrine to worship a cat statue as the incarnation of Omatsu.

The legend became widely known, and Omatsu became the god of victory since she had ultimately triumphed over the villains. The shrine became crowded with people who wished to win, too, and pass examinations.

"The line of beckoning cats is spectacular. I hope many people will visit us when they want to win against themselves and others," said Hiroshi Asegawa, the 11th head of the shrine. "I hope visitors will feel the presence of Omatsu, who so strongly believed in justice."

If you are lucky, you may also be able to meet Asegawa's beloved cats, Tora and Fuku.