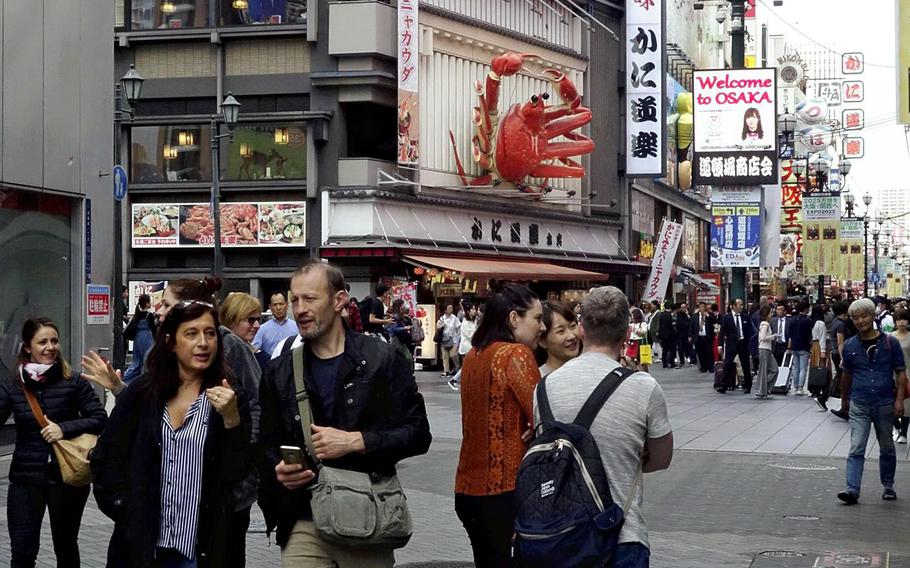 Foreign tourists are seen in the bustling Minami area of Osaka City in October 2018. (The Yomiuri Shimbun)

The Japanese government wants to see wealthy foreign tourists spending more money in provincial areas and plans to hammer out a new tourism strategy to get them to go there.

Under the plan, about 10 locations will be selected as "model tourist sites," and the central government will provide support to local entities and businesses for building and renovating luxury accommodations, and developing tourism resources that highlight the local natural environment and culture.

With the pandemic making it difficult to woo tourists from overseas, the new strategy aims to get a jump-start on efforts that revitalize local economies in the future by targeting the affluent overseas. The plan is to help local economies bring in tourists through their own power through measures like preparing accommodations that will satisfy big-spending tourists.

Currently, luxury hotels are concentrated in the big cities and there are concerns that few benefits of an increase in wealthy foreign tourists to Japan will flow to provincial areas.

The central government will soon set up an advisory panel to discuss the criteria for selecting the model tourism sites. Even in regions that have no famous tourist spots to speak of, it is necessary to determine if the local governments are eager - with the backing of residents - to attract wealthy foreign tourists.

In areas that earn the designation, financial help will be provided for the building or renovating of luxury accommodations, under the assumption that it will result in facilities and services that provide higher satisfaction. The state will also get behind development of tourism resources that provide experiences unique to the area, such as pottery-making classes.

The plan also calls for support in securing human resources, such as "travel designers" who formulate trip itineraries in accordance with tourists' interests and wants. If a place visited by a wealthy foreigner or celebrity is featured on social media, it could lead to an increase in foreign tourists there.

There are also plans to foster bilingual guides who can provide the gracious style of hospitality for which Japan is known.

The central government will add funding for the project to its draft budget requests to be submitted this summer.

In addition, easing regulations at local airports will be considered to increase use of the business jets used by the wealthy.

"To recover and increase foreign tourism after the pandemic ends, it is important to start making firm preparations now," said Koichi Wada, commissioner of the Japan Tourism Agency. He sees the new strategy as a foothold for future promotion of the tourism industry.

Japan can accommodate more wealthy tourists. According to the Japan National Tourism Organization, 31.88 million foreign tourists visited in 2019, spending a total of 4.8 trillion yen in the country.

Of the visitors, 290,000 spent over 1 million yen per person, accounting for less than 1% of the total, although their total spending was 550 billion yen, more than 10% of the aggregate.

The task at hand is how to get wealthy tourists to spend their money in provincial areas.

The Japan Tourism Agency conducted a survey of foreign tourists who spent more than 3 million yen with credit cards in 2019 to determine which business sectors attracted the most money.

Most of the spending went to purchasing goods. The largest portion, at 25.6%, was spent on precious metals and watches, followed by 20.9% for shopping at department stores and 6.5% for hotels and inns. Only 1.4% was spent for leisure-time activities.

Among areas, big cities benefited the most, as 67.2% of the total was spent in Tokyo, 18.1% in Osaka Prefecture and 5.6% in Kanagawa Prefecture. The amounts in those three prefectures alone accounted for more than 90% of the total.

The central government views provincial areas, blessed with such factors as changing seasons, traditional culture and unique cuisines, as having great potential to be attractive tourist spots.