Afoot in the House of Snow: My journey in the Himalayas Prayer flags are strung across the summit of Renjo La Pass in the Himalayas. (Tarcy Connors/The San Diego Union-Tribune)

When we flew out of San Francisco in early October, headed to Nepal for a 15-day trek in the Himalayas, I didn’t know which of a long list of liabilities might doom me to failure.

I had been training in earnest only for about six months, having added unwanted pounds during the pandemic that would make getting conditioned that much harder.

I worried that my right Achilles tendon, never fully healed from a severe sprain suffered nearly three years ago, would hobble me on the uneven and steep trails.

Then there was the vertigo. The head-spinning, nauseating episodes that could flatten me for an entire day were rare at first, but quickened in frequency just as COVID-19 locked down the world. The bouts eased with time and medication, but remained unpredictable.

So, that was the personal baggage I carried, along with my day pack and a 90-liter duffel, as I departed for a monthlong journey that would take me to Everest Base Camp at the foot of the world’s highest peak in a mountain range known as the House of Snow.

This adventure was not my idea. I had been pretty sedentary because of my nagging injuries and work demands and despaired of ever being rid of my tired self.

I was jolted out of my malaise by the woman who introduced me to hiking more than 25 years ago and has inspired me ever since, Marga Kellogg Cooley.

My inaugural hike was the 14,500-foot Mount Whitney in the Sierra Nevada range. That one-day adventure, a 21-mile round-trip endeavor, nearly killed me. While I was used to running marathons, I was ill-prepared for the altitude. But I was hooked, and Half Dome in Yosemite National Park (8,800 feet), Longs Peak in Colorado’s Rocky Mountains (14,200 feet) and Mount Kilimanjaro in Tanzania (19,300 feet) followed over the decades.

So, when Marga approached me earlier this year and asked if I would like to join her and her friend Bethany House in trekking to Everest Base Camp to celebrate her 60th birthday, I jumped at the opportunity to reset my life.

Then she showed me the itinerary prepared by our trekking company, Nepal Social Treks and Expedition. We would not be joining the masses on the popular and well-traveled so-called Everest Highway. Oh, no. We would be embarking on the lesser-known Three High Passes route, which involves ascending a trio of passes rising to 17,500 feet and above. Mount Whitney, by comparison, would seem like a cakewalk.

When we arrived in Kathmandu, it was hot and muggy, a marked contrast to the chilling temperatures we would soon encounter. We were herded into a makeshift building for the first of three stations where they checked our passports and COVID-19 test results. It took about two hours, but we finally emerged on the other side of the building and met our guide, Achut Pandey, a man of mirth and kindness who has trekked to Everest Base Camp more than 100 times.

He greeted us with garlands made from marigolds and accompanied us to the Woodapple Hotel & Spa, a welcome respite after our 20-hour-plus flight. Like many of the inns and motels, it was hidden amid a maze of very narrow streets where motorists, mostly motorcyclists, honk their horns to alert other drivers that they are coming around what seemed an endless succession of blind intersections. No traffic lights; no traffic cops.

The next day, as we recovered from jet lag, we toured Nepal’s capital, walking around a historic temple where the monkeys roamed as freely as the people. We stopped across the river from a cremation site where the remains of bodies were being prepared to be slid into the water. We visited an art school where students learned how to paint mandalas, some with exquisite detail and color.

The following morning, we were scheduled to fly to Lukla, the mountainside community that is the gateway to the Everest region, but bad weather forced us to wait a day.

Because there was a backlog of hikers and climbers ahead of us and a limited number of flights each day, we chartered a helicopter. It was the smallest egg beater I’ve seen capable of carrying five people. It was a nail-biting, 45-minute flight, but it allowed us to see the verdant, terraced hillsides as we left behind the densely populated capital that is home to 1.5 million people and headed up to the countryside, whose residents welcomed the gradual return of the tourists and trekkers who sustained their economy.

Once in Lukla (9,300 feet), we met our two 20-something porters, Purna Dumjan and Aidahan Tamang, whose slight frames would bear loads weighing 100 pounds or more, and began our journey to gradually adjust to the higher elevations. We hiked a short distance that day to Phakding (8,500 feet). The next day, we walked to Namche Bazaar (11,200 feet), a bustling retail hub of restaurants and street vendors hawking everything from yak bells to handwoven headbands to toilet paper, which would become one of my most coveted items on the trip. 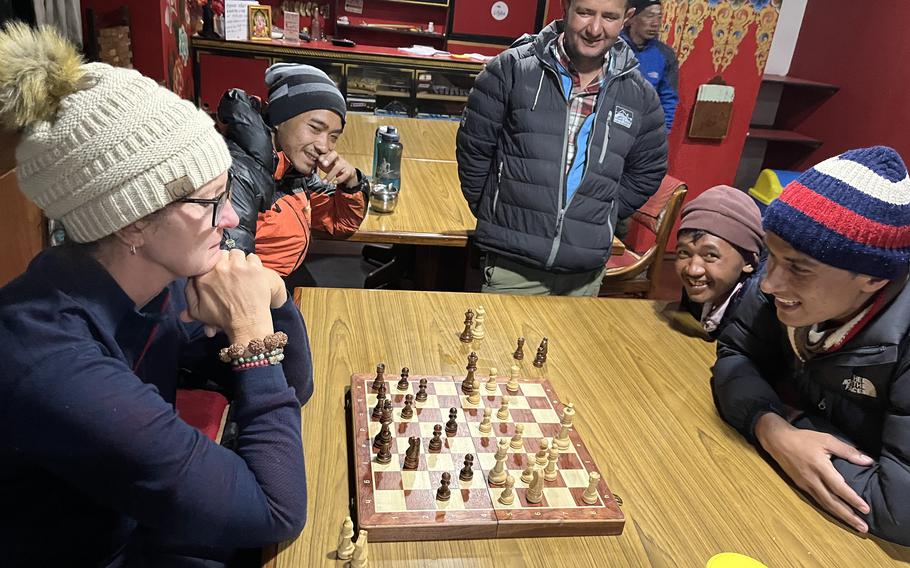 Marga Kellogg Cooley plays a game of chess with one of the porters. She lost. (Tarcy Connors/The San Diego Union-Tribune)

We did a day hike from Namche to Everest Hotel, where we got our first look from afar at the grande dame. We wouldn’t stand at her base for 10 days.

When we left Namche Bazaar, we turned east from the crowds onto a less-traveled, longer and more difficult route known as the Three High Passes route. Each day, we would climb progressively higher, from 12,000 to 14,000 to 16,000 to 17,000 feet, descending a few hundred or a couple thousand feet between climbs to acclimate.

The altitude kicked my butt. I didn’t sleep more than a few hours the first several nights because I had restless legs, I was cold and was just unable to adapt to the elevation.

I was blessed, though, that sleep was one of my few concerns.

Helicopters are a common sound — and sight — in the mountains and a reminder that lots can go wrong to derail a dream. While some are ferrying essential goods, building materials and sightseers, others are evacuating hikers who underestimated the effects of high altitude or just weren’t prepared. One group evacuated at 8,200 feet. A person was airlifted out after suffering from snow blindness. A man called it quits when his knees gave out because he could not sustain the pace of the group he was in.

As we walked from village to village, climbing higher into the Himalayas, we passed colorful prayer wheels, mani walls (stones inscribed with prayers), shrines and suspension bridges adorned with prayer flags, and trains of mules and yaks laden with goods, always announced by the bells ringing from the neck of the lead animal. We navigated the Ngozumpa glacier, a vast expanse of slowly moving ice full of scree, rocks and boulders.

We were cold. Very cold. The teahouses we stayed in each night were heated only in the common room where we ate and where trekkers gathered around a single stove typically fueled by yak dung. The rooms where we slept were not much warmer than outside, where the temperatures ranged from the teens to below zero. And we felt blessed if the toilet was more than just a hole in the floor and one we didn’t have to share. When we were done with dinner, usually around 7 or so, we retreated to our sleeping bags and any additional bedding provided by our hosts, and waited for the morning call to another day of trekking.

We awakened each morning between 4 and 6, depending on that day’s mileage and destination. While we initially were able to down a couple of eggs and a piece of toast, the higher we got, the less we ate. Eventually, just eating a bowl of rice or a plate of potatoes was a herculean effort. I lost nearly 15 pounds.

The altitude humbled in other ways. As our appetites slowed, so did our pace.

When I climbed Mount Kilimanjaro 20 years ago, the guides nicknamed me Pole Pole Mama. In Swahili, pole pole translates to “slowly slowly.” I earned a similar nickname in Nepal: Bistari Bistari (“slowly, slowly” in Nepali) Mama, though both the guide and porters eventually just called me Mama.

The day before we ascended to Everest Base Camp, we walked five hours in a snowstorm. I created a bit of a traffic jam on the trail when I was unable to descend safely because I couldn’t get my footing and needed an assist from Achut. I finally put on my microspikes, but I quickly lost one because I had put them on backward. Achut, again, rescued me from myself and retrieved the lost crampon.

In fact, we succeeded — I succeeded — because of Achut. His faith in us never wavered. He greeted us each day with a knock on our door and a cheerful “good morning.” He carried our packs. He deftly negotiated bureaucratic checkpoints — and our moods and capabilities.

He prepared a plate of fresh apples, oranges and pomegranates every night. He did not flinch the morning after Everest Base Camp when I greeted him with the cry, “What’s wrong with my face?” after viewing the swollen image in the mirror that showed my fair skin was no match for the relentless cold, wind, altitude, sun and snow. 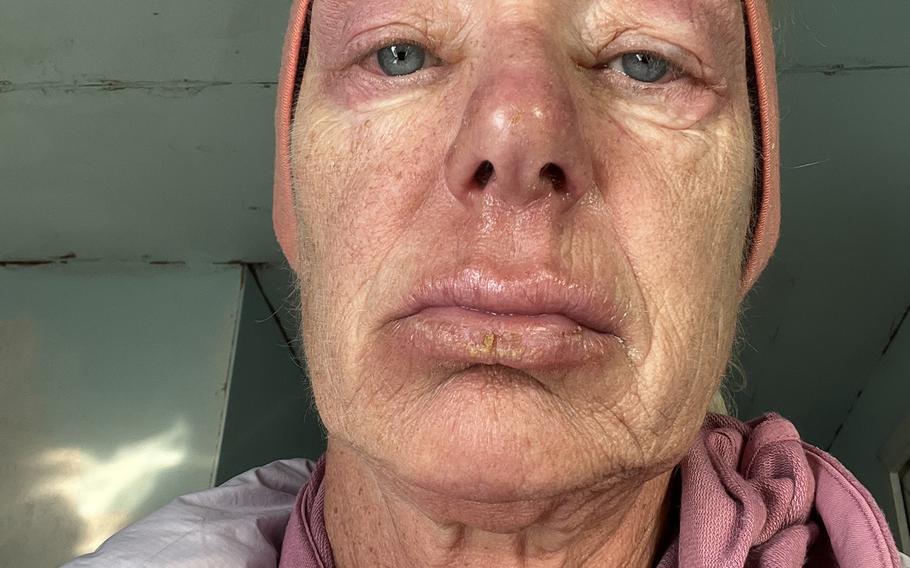 My sunscreen and hat were no match for the altitude, cold and wind. (Tarcy Connors/The San Diego Union-Tribune)

We trusted him implicitly as he guided us — confident, strong and surefooted — up and down icy, uneven and sometimes narrow paths. We forgave him the slight liberties he took when we asked how much longer we had, coming to understand that he was fudging the times to keep us moving forward.

Clearly, it was not an easy trek, but each day rewarded with a gift: late-season blue delphiniums; a Himalayan monal, which resembles a peacock with its brilliant plumage; the early-morning call of the Tibetan snowcock; 360-degree vistas of snow-covered peaks that shimmer silver at dawn and turn golden at sunset; the sound of glacial melt rushing downhill; and a herd of Himalayan tahr, a species of wild goat, navigating its way down a steep slope.

Each day, I had to remind myself: I’m hiking in the Himalayas. In Nepal. At 65.

All those liabilities I feared might trip me up? Nowhere to be found. The twice-weekly personal training sessions, spin classes, daily walks and weekend hikes paid off. The cranky ankle was really only cranky for a day or two. And there was no hint of vertigo.