A concrete structure, believed to have served as an observation deck, is seen in November on the premises of No. 2 Sea Fort. (Japan News-Yomiuri)

In the middle of Tokyo Bay sits an innocuous man-made island in the shape of a boomerang. It is a former gun battery base, built more than a century ago by the Meiji government for the protection of the capital city of Tokyo and called “No. 2 Sea Fort.”

Recent years have seen the start of tours to the island for the general public, drawn by the history of the valuable military remains.

The No. 2 Sea Fort is located some four kilometers west of Cape Futtsu in Chiba Prefecture and has a total area of approximately 41,000 square meters. Its construction, said to have been “the biggest and most difficult civil engineering project of the Meiji era [1868-1912],” started in 1889 and took 25 years to complete. 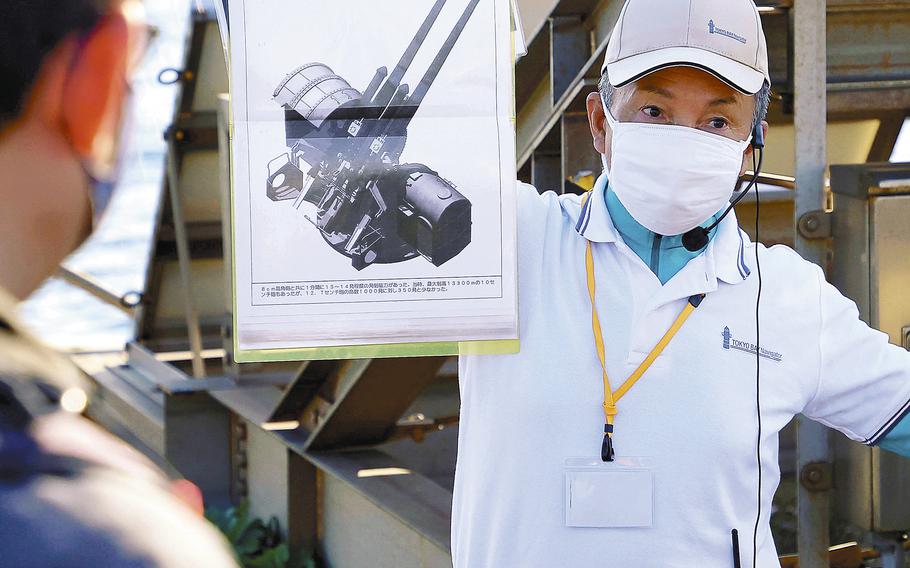 Tour guide Takeo Tomizawa explains the weaponry that was installed on the island during World War II. (Japan News-Yomiuri)

The sea at that location has a depth of about 12 meters, and the island was constructed by transporting rocks by ship and dumping them on the sea floor to form a foundation, then pouring earth and sand on top. Upon completion, a turret gun base was built, and during the war, its operators kept a sharp eye out for foreign vessels entering Tokyo Bay.

After World War II, the fortress became obsolete. As it began to deteriorate, the island was declared off-limits to the general public.

It remained inaccessible for decades, until the establishment in 2018 of the No. 2 Sea Fort of Tokyo Bay Tourism Organization, set up jointly by the Land, Infrastructure, Transport and Tourism Ministry, the cities of Futtsu and Yokosuka, Kanagawa Prefecture, and other entities, with the aim of using the historic island as a tourism resource.

In 2019, tours to the island started in cooperation with private travel agencies, including one departing and returning to Tokyo Station.

On one day in November, about 40 people were seen on a tour from Yokosuka Port, following a guide who described the history of the turret gun base, its observation deck and other aspects of the island. A ferry boat with tourists arrives at the No. 2 Sea Fort. (Japan News-Yomiuri)

“This facility was built with the leading civil engineering technologies of the time,” said the tour guide, Takeo Tomizawa, 70. “Coming to this island and looking at the area around it, visitors will surely understand why a fortress was needed at a place like this.”

The visitors were impressed. “To have such a massive fortress in the middle of the bay is amazing,” said a 49-year-old woman from Saitama Prefecture.