Want to glimpse our metaverse future? Theme parks are already on the case A rider wears themed augmented reality goggles on the Mario Kart ride during a media preview of the theme park at Universal Studios Japan in Osaka on March 17, 2021. (Philip Fong, AFP, Getty Images/TNS)

The promise of augmented reality so far has largely been just that — promises of a future seen through filters for our mobile phone apps or simple games that place characters with little movement on our camera screens. But if this whole metaverse thing — the concept of a persistent, evolving online world that we don't log into as much as live inside — is ever going to take off, we're going to need more.

Our theme parks, which increasingly are centered on the concepts of games and play, may offer a glimpse of where the future is heading.

In the not-too-distant future Universal Studios Hollywood will import a Mario Kart-themed ride from Japan that is centered on augmented reality, an attraction designed to create the illusion that we're interacting with virtual objects and characters. Unlike most AR-enhanced mobile phone apps, where the images are tailored to an individual's screen, the use of visor-like glasses will allow all guests on the ride to engage with the digital creations in real-time.

And earlier this month the Walt Disney Co. quietly announced that it is "in conversations" with Illumix, a Redwood City, Calif.-based AR firm that has been rooted in games (Five Nights at Freddy's AR: Special Delivery) and e-commerce but is quickly expanding into physical realms. Illumix tech offers a range of experiences, including entertainment that merges physical and digital effects as well as more personally grounded character interactions.

One of the demos previewed by Illumix as part of the experimental tech program Disney Accelerator just happened to show some over-the-top, vintage cartoon-inspired interactions in Mickey's Toontown, an area of Disneyland that the company would later announce would be reimagined with more green space and a number of interactive, play-focused activities.

These were tech demos and shouldn't be viewed as guarantees that any will show up in the park, but the proof-of-concept projects signal that an augmented reality-enhanced future is getting closer. Among the tantalizing scenes shown: an animated overlay in the Toontown area of the park with cartoon explosions intermingled with real-world smoke, a glimpse of Buzz Lightyear soaring around and through Disney California Adventure, and Minnie Mouse hanging out on a Main Street, U.S.A., balcony to offer birthday greetings to a young fan.

What impressed most about Illumix's demos was the way in which the augmented reality characters appear to move with and understand their surroundings rather than appear like virtual stickers. Illumix founder Kirin Sinha says she has to be delicate in discussing her company's potential collaborations with Disney, but she ultimately sees the gaming world continuing to influence physical spaces.

"It's this idea that it's constantly evolving — based on other people, your preferences, choices you made in the past, virtual events. We can take what's happening in the digital content world and bring that to physical experiences," Sinha says. 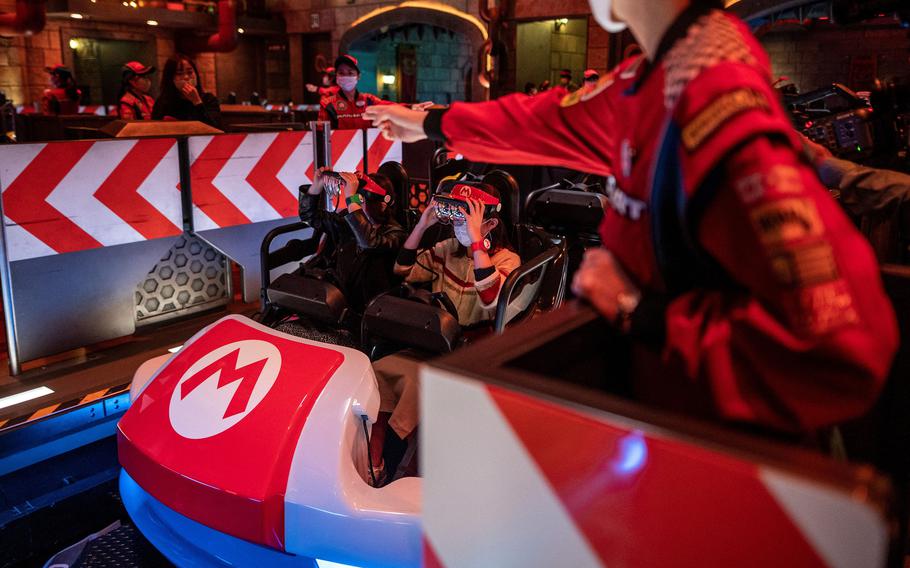 It's easy to imagine augmented reality providing digital overlays of lands and for the park to better respond to birthdays and anniversaries. Or, for a theme park history buff like myself, a way for the phone to provide location-based historical knowledge with corresponding historical image overlays.

Theme parks, of course, offer perhaps the easiest way to understand the concept of the metaverse, which is often spoken of as an all-encompassing and persistent virtual world where we shop, play, work, communicate and watch entertainment — the metaverse is a virtual theme park, if you will. Early examples, such as Epic Games' Fortnite or the content creation game universe Roblox, are, like Second Life before them, rooted in the video game space. Meta, the newly rebranded Facebook, has focused its conversations on virtual reality or productivity tools such as virtual meetings.

But the concept that we'll wake up and plug into a virtual world for all of our daily interactions is a bit dystopian, likely far off and will probably never be a reality unless climate change forces it to be. More likely it is something akin to the Disneyland model, where entertainment, technology, architecture and more come together in spaces that blur technological lines.

"There's the 'Ready Player One' version of a metaverse, where we all live and work and our lives are totally digital. I don't think that's ultimately where this is going, to a point where we're not in this physical world," says Sinha. "I don't think there's any evidence to suggest that people actually like doing that."

"However," she continues, "if you look at the companies that are excelling in the metaverse, of course they would want to frame the metaverse as a future where everyone is going to live their entire lives in that company's world. That's the story you're going to go out and pitch, but the reality, if you zoom back, is that the metaverse is about taking the separation of the physical and digital and combining them."

Disney of late has been talking of building its own metaverse, and that is represented in how the worlds of Star Wars influenced a theme park land, which in turn influenced a virtual reality game. Film and television are merging into a singular world that's represented in a theme park and interactive entertainment such as games. Disney has even teased what appear to be augmented reality glasses that can up the educational content in a park such as Walt Disney World's Animal Kingdom.

Then, of course, there's the experiment that is the Star Wars Galactic Starcruiser, a multi-day "Star Wars"-themed hotel that's spoken of as a cruise ship-like experience on land.

But it's really offering guests the opportunity to spend thousands of dollars to turn themselves into Star Wars avatars, allowing those willing to spring for the rooms, which start at just shy of $5,000 for two guests, to immerse themselves in a live-action video game. If it works, it's the ultimate realization of an interactive-driven, play-focused society, one where a metaverse isn't something we simply plug into but can constantly surround us. The Starcruiser's thesis is that there is no barrier between the storyteller and story participant.

Games and tech have been heading in this direction for decades. That's been the promise of everything from Dungeons & Dragons to The Legend of Zelda to immersive theater projects such as "Sleep No More."

It's also a contention that the metaverse won't define our world so much as influence it. Think, perhaps, of a future where entertainment becomes something of a wall-less theme park. Let's just hope the headaches of both worlds — the strollers and the lines of a theme park, and the dangerous misinformation of the modern internet — get sorted somewhere along the way.