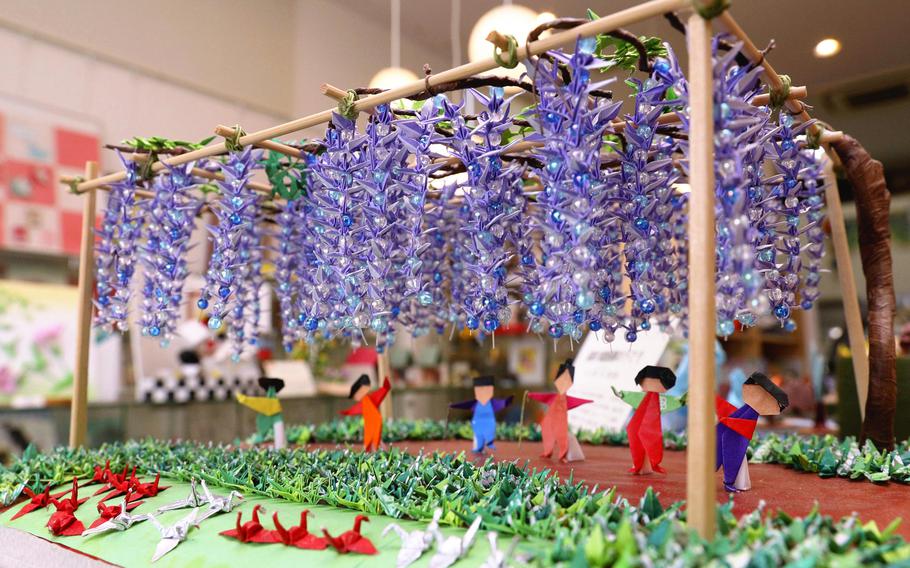 Akira Iwabuchi's work at the Tokyo Origami Museum, "Under the full-blown wisteria trellis of cranes!!," features small origami cranes displayed in such a way to resemble a wisteria trellis and grass. (Japan News-Yomiuri)

Intricate works of art created by folding colorful pieces of paper can been seen at the Tokyo Origami Museum located near the Sumida River’s Umayabashi bridge.

Visitors can look at a variety of origami, the traditional Japanese art of folding paper that has long been popular among foreigners, on display created by origami artists and enthusiasts.

The museum was opened in 2010 by the Nippon Origami Association, which promotes origami culture in both Japan and abroad. The museum houses the association’s offices as well as a classroom to hold origami classes.

About 230 origami are on display at the museum, some of which were created by origami artists, but most have been collected from enthusiasts who have displayed their works at events organized by the association.

The first piece visitors see when they walk in is Akira Iwabuchi’s work, “Under the full-blown wisteria trellis of cranes!!” The miniature diorama features small origami cranes that are displayed in such a way to resemble a wisteria trellis and grass. The work creates a scene in which children are looking up at the wisteria trellis, which is created using purple canes, beads, disposable chopsticks and other materials.

Kazuji Kushiro’s origami named “Biodiversity: the connection of life” is a large work displaying 17 kinds of plants and animals, including monkeys, owls and sunflowers, in a field. The piece expresses the artist’s hope that viewers will feel connected to other living things through the work.

Other unique origami on display include a pine bonsai and maple bonsai made of paper cranes stacked on top of each other, bindweeds formed using origami and colored paper, and Santa Claus.

“Origami has an infinite number of possibilities,” an official of the association said. “It all depends on the imagination of the creator.”

Such creative works of art are sure to stimulate the senses of everyone who sees them and will make a fan out of anyone. The museum not only displays unique and intricate pieces but also sells about 500 kinds of colorful origami paper.

Instructors hold monthly origami classes on the second floor of the museum. Registration is required and costs 500 yen to 2,500 yen per class, including materials.