by
Walter Nicklin
• Special to The Washington Post • August 4, 2021 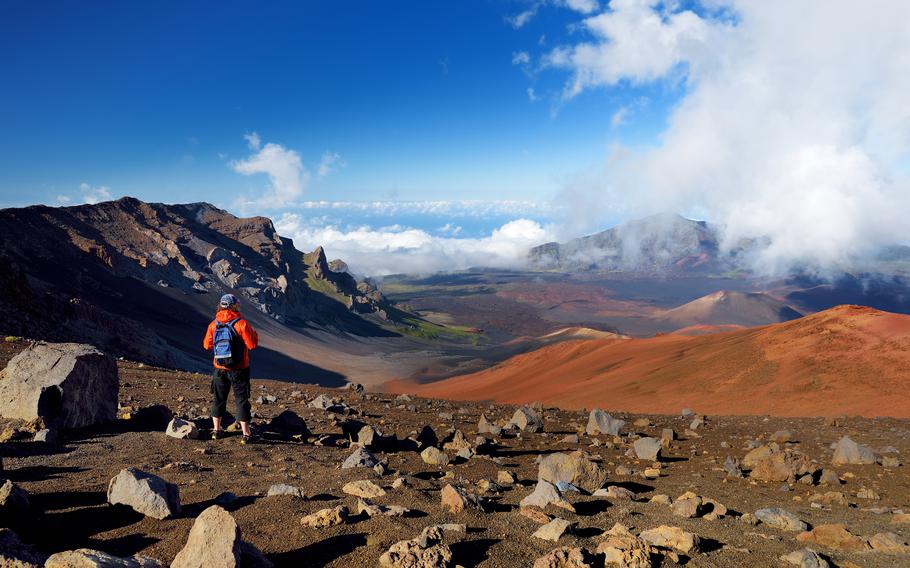 A hiker stands at the edge of the Haleakala crater. According to one of the many legends associated with the Polynesian demigod Maui, he captured the sun at the 10,000-foot summit of Haleakala. After receiving a promise from the sun to traverse the sky more slowly, so people would have more daylight, Maui released his captive. The mythology of a place greatly influences the everyday lives of locals. Understanding that mythology is akin to speaking the local language beyond the ability to order off a menu. (iStock)

The Transportation Security Administration advisory to ticket holders departing Maui's Kahului Airport that day warned of "high travel volume." Arrive at least three hours before scheduled departure, the email warned. My wife and I dutifully did as instructed, but doing so didn't help. The agonizingly long line for security check, endlessly snaking back on itself, seemed more appropriate for Dulles International, LAX or JFK than an airport on one of the isolated islands in the Hawaiian archipelago.

What did help in mitigating the frustration was the nearby presence in an open courtyard of a 25-foot-tall cast-bronze statue of a stylized human form lifting high a huge, bright yellow star. But few in the long line of the understandably impatient, sweating and grumbling travelers seemed to notice. Putting things into cosmic perspective was this statue by Shige Yamada depicting the Polynesian myth of "Maui Releasing the Sun."

Becoming familiar with the ancient myths of the places you visit is not unlike being conversant enough in a foreign language to order from a restaurant menu without translation. You become less of a tourist, more like a native. Local legends serve as kind of a poetic travel guide, adding a layered, nuanced sense of time and place that travelers might otherwise miss. Embedded deep in cultural memory, they are as much a part of the heritage of a place as museums, monuments and iconic architecture.

According to one of the many legends associated with the Polynesian demigod Maui, he captured the sun at the 10,000-foot summit of Haleakala, a dormant shield volcano that created most of Maui the island's land mass. After receiving a promise from the sun to traverse the sky more slowly, so people would have more daylight, Maui released his captive.

Of the many interpretations of the possible truth to be found in this myth, the most relevant for anxious travelers hurrying to catch their flights has to do with the passage of time. The mythical Maui slowed it down, and visitors - if sufficiently relaxed - can let themselves experience "island time." That's what a Hawaiian vacation should be all about, after all. It's the same approach to time as required in the Hawaiian-born sport of surfing - bobbing in the ocean while patiently waiting for the perfect wave.

The ocean, with its turquoise waters and beautiful beaches, is, of course, what beckons tourists to the islands. And this summer, there is an immense crowd of visitors on both Maui and Oahu, like my wife and me, breaking free from months of pandemic lockdown.

But more than sunbathing and snorkeling, something "spiritual," for lack of a better word, awaits those made aware of Hawaiian origin stories. Passed on orally over the centuries, they recount how gods and demigods, personified in nature, helped Hawaiian ancestors make their way from other Pacific islands to create their new paradise.

Remarkably aligned with the science of evolution, an epic 2,000-line Hawaiian creation chant tells of life itself beginning in the sea with the marine invertebrates known as coral. As land rose from the ocean - thanks to Pele, the goddess of volcanoes - more complex creatures began to populate the earth.

The ocean gave birth, so it also offers solace in death. On Maui's west coast is a massive volcanic outcropping called Black Rock, where spirits of the recently deceased are said to leap into the afterworld to join their ancestors. A similarly situated and sacred Black Rock sits on the northwest coast of Rarotonga in the Cook Islands. On the Hawaiian island of Oahu, ancient folklore calls Kaena Point the "jumping-off" point for souls departing the living world. In New Zealand, the spirits of the dead leap off the headland at Cape Reinga on their journey to the afterlife.

Given this mythic ritual's ubiquity throughout the Pacific, unsuspecting tourists are well-advised to beware of "Pele's curse." If they take home as a cherished souvenir one of Pele's pretty volcanic rocks, the legend goes, or even a scoop of black sand, bad luck will surely befall them. Sure enough, rangers at the Volcanoes National Park on Hawaii's Big Island report receiving many packages of rocks from guilt-stricken visitors. Enclosed with the rocks are confessional notes blaming the rocks for such situations as IRS audits, divorces and job losses.

The superstition may be traced back to the fear that embodied in the rocks are the unlucky souls unable to make the journey to the afterlife. Even though island visitors can readily dismiss it, wisdom can still be found in this myth-based admonition. It speaks to an oral tradition of native reverence for the natural landscape - in the Hawaiian language, `aina. Unaware, disrespectful tourists risk picking the landscape clean and replacing rocks with plastic litter.

A childlike sense of wonder is at the heart of all these timeless fables, in the oft-stated worldview of American poet W.S. Merwin, who spent his final years restoring a Maui palm forest. Natural wonders spark the human imagination, as made clear in his poems. This ability to image both distinguishes us from all other creatures and allows us to connect with others.

So it is that mythology and folklore are fundamentally about connections and origins -how a particular place came to be. From the French, they're known as "pourquoi stories," or why something happened. More formally, they're known as "etiological tales." Rudyard Kipling called them "just-so" stories.

You don't have to travel from the U.S. mainland to encounter myths with an environmental message, which are well worth one's attention in this time of possibly catastrophic climate change. As in the Pacific islands, Native American storytelling wove humankind into nature - part of, not separate from. To think that people were somehow superior would not end well. Because of overfishing, for example, summertime visitors to New England won't find much cod on restaurant menus, even though it was once so abundant that it's how Cape Cod got its name.

Just up the coast, on the Gulf of Maine, a Penobscot Indian legend survives about a colorful character named Gluscabi, redolent of Shakespeare's Wise Fools. No matter how much game he hunts and bags, he always wants more. So he asks his grandmother to make a game bag big enough to hold all the world's animals, which she reluctantly does. When he captures so much game to realize the inevitable and terrible consequences, he just hopes he's not too late to ask her to undo it.

Even an extended European vacation would seem desultory without an acquaintance with the myths and legends that animate its culture. A visit to the Louvre in Paris, for instance, shows how dependent Western art is on Ancient Greek and Roman myths for provocative subject matter. The scenery spied on cruises on the Rhine and Danube rivers is layered with meaning found in fairy tales and folklore. For opera lovers, familiarity with Norse mythology eases a gateway into Richard Wagner's four-piece cycle "Ring of the Nibelung."

A ring is circular, of course. The very opposite of linear time, with its clocks, desk calendars and schedules. For true get-away-from-it-all vacations, therefore, just follow the cyclical magic of the sun, the moon and the seasons. That's what most myths counsel.

My last day in the Hawaiian archipelago was spent on Oahu's North Shore, legendary for its big-wave surfing. Along the sandy and rock-strewn beach, one particular small rock (the size of a golf ball) caught my eye. Polished yet pockmarked, this charcoal black sphere of basalt was accentuated by the white remains of coral somehow melded to part of its surface. As I picked it up, my fingers massage its sensuous, porous quality. I was tempted to put it in my pocket, but I didn't dare. To see it, to hold it briefly in my hand: that's enough, more than enough.