Appearing out of the blue, new Japanese attraction ‘rocks’ 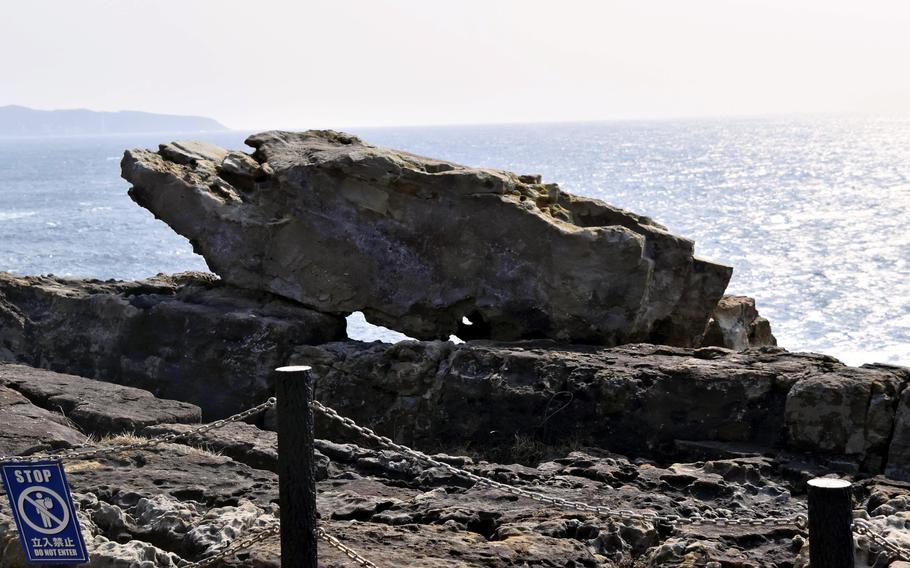 SHIRAHAMA, Wakayama, Japan — A boulder that suddenly appeared on scenic cliffs in a beach resort area of Shirahama, Wakayama Prefecture, is expected to become a new tourist attraction.

At 14 feet long, 3 feet wide and 4 feet high, the boulder looks like it weighs several tons. It appeared three years ago on the Sandanbeki Rock Cliff, a scenic area of 164-foot-high cliffs stretching for more than half a mile.

A strong typhoon swept across the Japanese archipelago, including Wakayama Prefecture, in September 2018. The boulder appeared at the edge of the cliffs right after the typhoon.

Locals believe the rock may have been carried by high waves during the typhoon, since it has the same structure as the cliffs, which are made of sandstone and mudstone.

The waves were so high at the time that they reached the top of the cliffs. Locals speculate receding waves must have carried the rock from the land side of the cliffs to the seaside.

Sandanbeki is a popular tourist spot in the town of Shirahama. There is an observatory where visitors can get a panoramic view and a cave where the waves crash. A company operating a cave sightseeing tour came up with the idea of turning the rock into a new tourist resource.

The company, Sandanbeki Cave, asked the public to name the boulder through its official Instagram account, and via an application box in the cave. The name chosen was "Sudden Rock" because it suddenly appeared.

The typhoon also left devastating scars in the area. The high waves collapsed a portion of the cliffs, and the face of the cliffs about 330 feet (100 meters) west of the observatory was gouged, and several boulders fell into the sea.

"We want people to witness the power of typhoons and the wonder of nature," the company said.