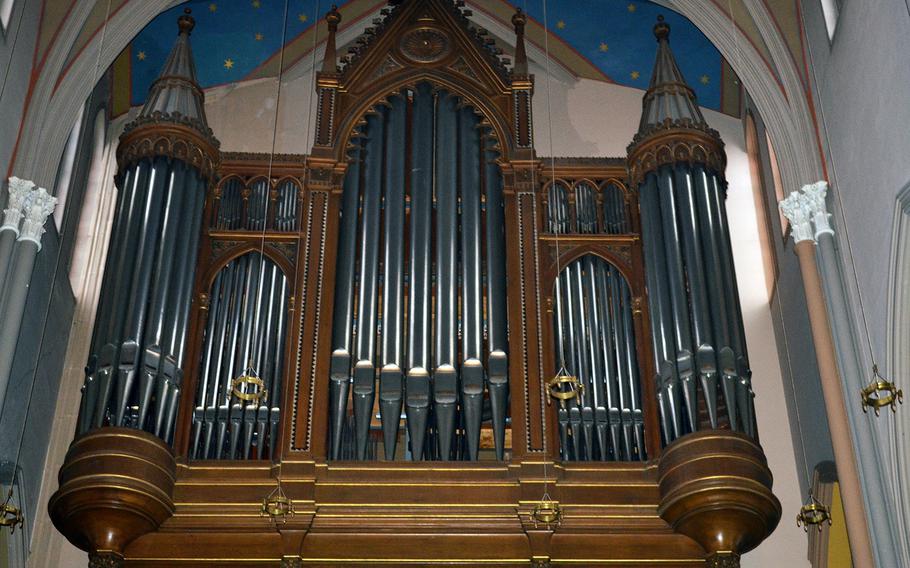 Buy Photo
The organ inside the Marktkirche in Wiesbaden, Germany, was built in the 19th century and has more than 6,000 pipes. (David Edge/Stars and Stripes)

Buy Photo
The organ inside the Marktkirche in Wiesbaden, Germany, was built in the 19th century and has more than 6,000 pipes. (David Edge/Stars and Stripes) Buy Photo
Statues of Jesus Christ and the four Evangelists, Matthew, Mark, Luke and John, who are said to have written four of the gospels in the New Testament of the Bible, overlook the altar in the Marktkirche in Wiesbaden, Germany. (David Edge/Stars and Stripes) 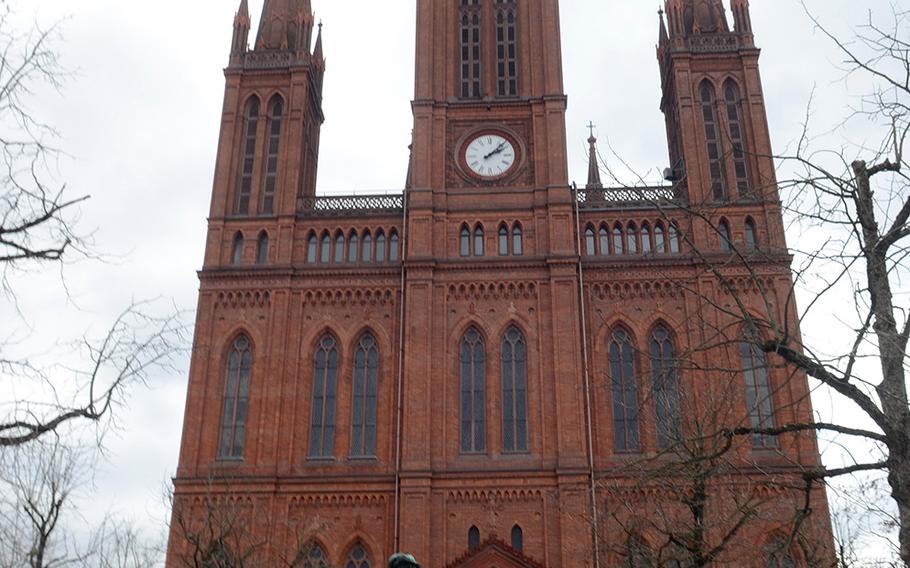 Buy Photo
The Marktkirche, or market church, in Wiesbaden, Germany, was built between 1853 and 1862 in the neo-Gothic style, characterized by its stone and brick structures, heavy decoration, pointed arches, steep gables, and large windows. (David Edge/Stars and Stripes)

With coronavirus infections still high in Germany, and U.S. and German authorities continuing to advise against unnecessary travel, I needed somewhere local to visit to get me out of the house.

Having grown up in a small town in the U.S. Bible belt, I have always loved visiting churches, marveling at their architecture and taking in their history. So I chose as my close-to-home coronavirus escape the Marktkirche in downtown Wiesbaden.

The church was built in the neo-Gothic architectural style, characterized by stone and brick structures, heavy use of decoration, pointed arches, steep gables and large windows, between 1853 and 1862 after the city’s main church at the time was destroyed in a fire.

Back then, Germany as we know it today didn’t exist. Today, the church is the main Protestant house of worship in Wiesbaden and one of the tallest buildings in the city.

Its five towers soar into the Wiesbaden sky, and it’s easily the most picturesque edifice in the area, with its red brick structure contrasting with the gray and white buildings that dominate downtown.

The towers contain a carillon that houses 49 bronze bells, the largest of which weighs 2.2 tons. The bells are rung five times a day — at 9 a.m., noon, 3 p.m., 5 p.m. and 7 p.m. — and, starting in March last year, after the World Health Organization declared the coronavirus outbreak a pandemic, they rang out tunes like “You’ll Never Walk Alone” and “We Shall Overcome” at 6 p.m.

That was the church’s way of thanking Wiesbadeners for helping each other out during the pandemic and of giving them hope and strength during difficult times, Marktkirche’s cantor, Thomas Frank, said in an interview last year with the local paper.

Inside the church, the organ, built by Eberhard Friedrich Walcker in 1863, is the oldest and largest in Wiesbaden. It has 6,198 pipes.

I felt emotional as I stood by the bronzed, cast-iron pulpit, surrounded by ornate, stained-glass windows and statues of Jesus Christ and the four Evangelists — Matthew, Mark, Luke and John, who are said to have written the four Gospel accounts in the New Testament.

In the midst of the coronavirus, the Marktkirche is a serene place to visit.

Services: Sundays and holidays at 10 a.m.

Food: The Marktkirche is immediately next to Wiesbaden’s farmer’s market, and there are several restaurants in the downtown area.