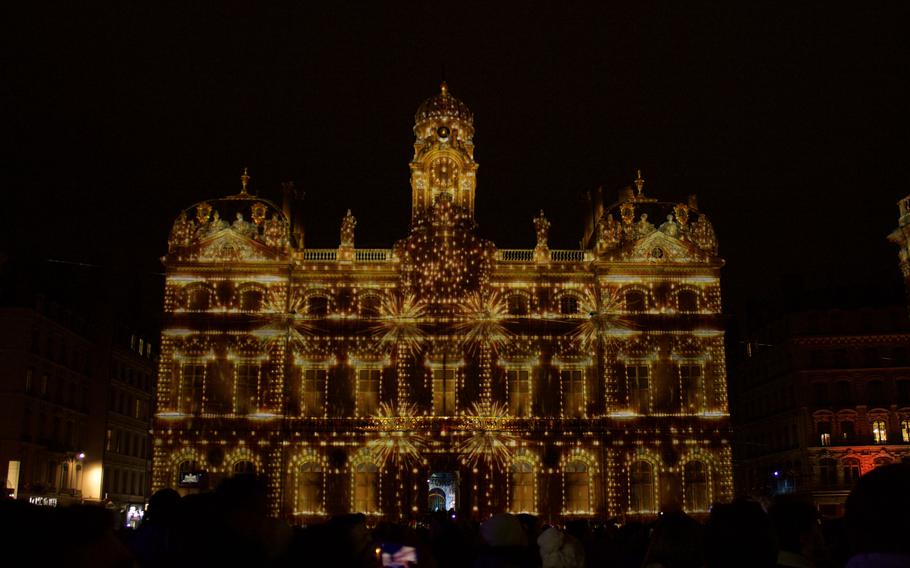 Lyon City Hall and other buildings in the French city’s Old Town are illuminated during Fête des Lumières, or the Festival of Lights, which takes place Dec. 8-11 this year. (iStock)

Since 1852, the city of Lyon, France, has had a wonderful way of bringing light to the darkest season of the year. On Dec. 8 of that year, a bronze statue of the Virgin Mary was to be ceremoniously inaugurated at a church on a hill overlooking the town. When a fierce storm forced these plans to be canceled, the citizens of the town instead lit candles, placed them on their windowsills and took to the streets to admire the scene. What started as a spontaneous local celebration is now a major event known as Fête des Lumières, or Festival of Lights, attracting millions of visitors to France’s third-largest city.

From Dec. 8-11, Lyon will once again bathe in light. The Renaissance facades and majestic buildings of the Old Town serve as the backdrop to 30 magnificent installations designed to transport viewers to realms reminiscent of nature, distant constellations and fantasy worlds. Food and drink stands keep festivalgoers fueled for their next round of viewing. Entry is free. Online: fetedeslumieres.lyon.fr

In contrast to Lyon’s short-lived celebrations, many European cities turn the lights on bright for several weeks running. Here are some places destined to brighten the short December days:

Amsterdam Light Festival: The 20 light artworks placed in and along the canals of the eastern part of town can be enjoyed in two ways: by means of a walking route, or aboard a ship making its way through the canals. The installations can be admired 5 p.m.-11 p.m. nightly through Jan. 22. Ticket prices for canal cruises start at 26.50 euros ($27.55) adults, those for children ages 4 – 12 begin at 13.25 euros, and children ages three and under ride for free. Online: amsterdamlightfestival.com

Winter Wonders in Brussels: Belgium’s capital city stylishly celebrates the holiday season with festivities organized around the umbrella term Winter Wonders. A Christmas market, skating rink, giant Ferris wheel and illuminated streets are just some of its many attractions. Another aspect of its celebrations is a sound and light show projected onto the façade of the Town Hall of the Grand-Place, one of the most majestic squares in all Europe. This year’s show takes its theme from music from around the world. The 10-minute show can be enjoyed from 5 p.m.-10 p.m. through Jan. 1. The free spectacle takes place once hourly Mondays through Thursdays, and once every half hour Fridays through Sundays. Online: plaisirsdhiver.be/en

Christmas at the Botanics in Edinburgh: Once night falls at the Royal Botanic Garden in Scotland’s capital city, awe-inspiring light installations from sparkling tunnels of light to bouncing laser beams enliven the lakes, trees and surrounding greenery. Amongst this year’s crop of installations are found giant lilies, floating feathers and one approximating the Northern Lights. Sightings of Father Christmas are not unheard of along the mile-long pathway. Hot chocolate and spicy winter warmers keep bodies warm and spirits high. The garden remains open through Dec. 30. Adult admission starts at 21.50 pounds; ages 4-16 pay 15 pounds and those ages three and under enter free. Online: tinyurl.com/2yjddppk

Christmas Garden in Frankfurt: The woodsy area outside Deutsche Bank Park, home stadium to the Frankfurt Eintracht soccer team, undergoes a seasonal transformation with the opening of its Christmas Garden. The attraction, which premiered in 2021, offers a mile-long trail lined with shimmering lights and illuminations. The Christmas Garden is open 4:30 p.m.-10 p.m. most evenings through Jan. 15. Adult ticket prices begin at 19.50 euros, tickets for school-age children start at 15 euros, and those under five enter free. Other German cities hosting Christmas Gardens include Berlin, Cologne, Dresden, Hanover, Koblenz, Muenster and Stuttgart. Online: christmas-garden.de/en/frankfurt

Christmas at Kew Gardens in London: Kew Gardens, one of the most extensive and important botanical gardens of the world, is located on a former royal estate in the London borough of Richmond upon Thames. The UNESCO-listed site takes on a special aura around the holidays, as new editions of its mesmerizing winter trail are staged. The approximately 1.5-mile walk takes about 75 minutes to complete. Amongst its sparkling tunnels of light, trees draped in colorful lights and a fire garden are found vendors offering seasonal street foods and warming beverages. The garden is open 4:30 p.m.-10 p.m. on most days through Jan. 8. Adult ticket prices begin at 21.50 UK pounds ($25.90) for visits at off-peak times; these do not include entry to Kew Gardens during its regular daytime operating hours. Online: kew.org/kew-gardens/whats-on/christmas

Jardin Des Plantes Light Festival in Paris: The fourth edition of this light festival has chosen "Miniature Worlds" as its theme, bringing into the spotlight the tiny components that make up various eco-systems, including a meadow, forest, pond, household and the human body. The installation can be visited from 6 p.m. on most days through Jan. 15. The cost of entry begins at 17 euros for adults, 14 euros for children ages 3-12 and is free for ages two and under. Online: tinyurl.com/cbmc863y

Luci D'Artista in Salerno: In 2006, an initiative known as Luci D'Artista was launched in this small port city on the Amalfi coast south of Naples, and it’s been pulling in the crowds ever since. Nowadays, some 16 miles of streets, parks and piazzas are brought to life by means of creative lighting and quirky installations. Visitors can enjoy the sights until Jan. 15. Entry is free. Online: lucidartista.it