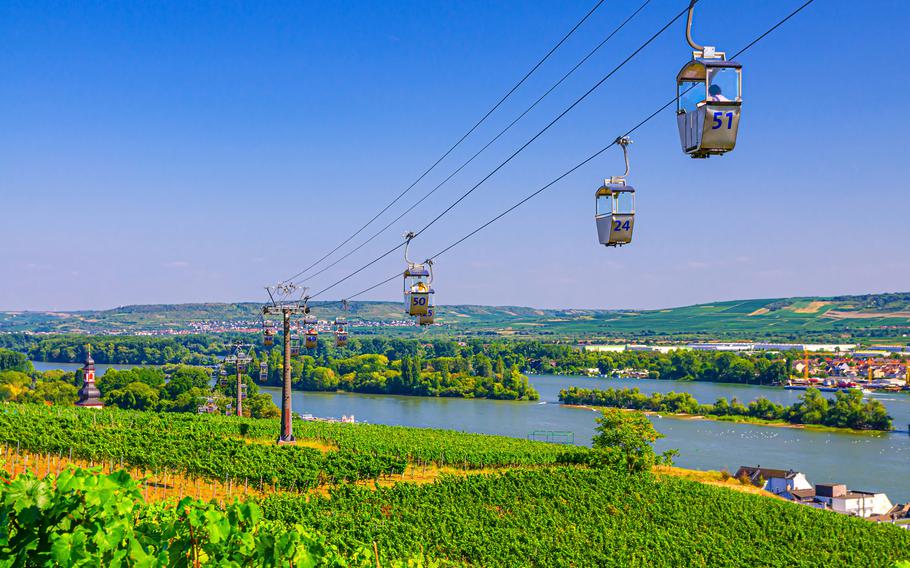 Ride the cable car above Rüdesheim for a sweeping view of the Rhine. The attraction closes Oct. 30 but reopens Nov. 21. (iStock)

The days are growing shorter and cooler across Europe, but there’s still plenty happening, even in outdoor spaces. The bounty of the harvest and the beauty of autumn’s gold and red palette serve as enticements for afternoon excursions; by evening, events such as light festivals and museum nights might be enough to coax curious types further afield. Here are just a few ways in which to take advantage of autumn’s fast-fading glory.

Fun fairs: Germany’s fun fair season is enjoying its last hurrah, so enjoy one last round of gaming booths, beer tents and scary rides. Mayen’s Lukasmarkt runs through Oct. 23, and Kaiserslautern’s Oktoberkerwe goes until Oct. 24 — look out for a fireworks display from 9 p.m. on its final day. Munich’s Auer Dult, not only a fun fair but a market, also runs through Oct. 23. Speyer’s Herbstmesse keeps its gates open Oct. 21-31, and Rothenburg o.d. Tauber’s version of the same can be visited Oct. 30-Nov. 7.

Another Volksfest of note takes place in Basel, Switzerland. The “Basler Herbstmesse,” running Oct. 29-Nov. 13, is the country’s largest fun fair and one with an impressive history- its first edition dates back to 1471. The “Hääfelimäärt,” at which pottery and wooden goods are sold, is a surviving element of the event's roots as a marketplace. Online: herbstmesse.ch/en

Wine and Walk: Always-charming Rüdesheim am Rhein, Germany, celebrates harvest season over the two last weekends of October with its “Tage des Federweissen” wine fest. From Oct. 21-23 and Oct. 28-30, a handful of local vintners will set up their stands around the town’s market square. Onion tarts and other dishes of the season accompany the fizzy drink made from freshly pressed grapes. Live music typically makes up part of the festivities as well. Online: tage-des-federweissen.de

One of the highlights of a visit to Rüdesheim is a ride in its cable car. The old-timey attraction whisks passengers high above the vineyards to the Niederwald Monument, a statue and assembly commemorating the founding of the German Empire in 1871. Sweeping views over the Rhine valley make an impressive photo backdrop. The chairlift operates daily through Oct. 30 and will resume service once the Christmas market opens on Nov. 21. Online: seilbahn-ruedesheim.de

Museum Nights: Mons, Belgium, keeps the doors of its museums open until just before midnight on Oct. 21; a bracelet allowing access to its 10 participating venues, along with concerts, workshops and other activities, goes for 6 euros. Online: visitmons.be/agenda/nuit-des-musees

Brussels’ Museum Night Fever, slated for Oct. 22, plays out across 34 museums and the streets of the Belgian capital. Artists and creative types are given carte blanche to bring their visions to life in the form of exhibitions, performances, installations, live music, DJ sets, guided tours and other initiatives. Adult passes cost 18 euros. Online: museumnightfever.be

Light Festivals: The city of Augsburg, Germany, will shine throughout the weekend. From 7 p.m.-11 p.m. Oct. 21-23, Light Nights Augsburg features installations and projections, including a show inspired by the nature of Tenerife, one of the Canary Islands. Online: tinyurl.com/2vfxrbvh

Eindhoven, Netherlands, hosts its light art festival GLOW from Nov. 12-19. Along a themed walking route, visitors can take in some 30 unique artworks, as standalone features or projected onto buildings, parks, roofs and other surfaces. The theme of this year’s edition, Urban Skin, interprets the city center as a living organism. Online: gloweindhoven.nl

Similar events include the Fete des Lumieres in Lyon, France, to be organized Dec. 8-11. A show titled Lightopia will make its continental debut at the Château de Grand-Bigard in Dilbeek, just outside of Brussels, and run Nov. 18-Jan. 8, 2023.

Volksmarches: Walking need not be a solitary sport when taking part in a Volksmarch, an organized walk in which participants elect to hike various distances along well-signposted trails and receive stamps in a special passport-style booklet for their efforts. Hohenöllen, a village some 25 miles north of Kaiserslautern, is the site of a walk of either 5 or 10 km Oct. 23; the start time is between 8 a.m. and 1 p.m. For other Volksmarch dates, search for “Wandertag” online at dvv-wandern.de.

Pick your own fruit: While harvesting apples growing on your neighbor’s tree is an act that could land you in heaps of trouble, not all fruit is forbidden in Germany. Fruits and nuts growing on some public lands, excluding protected areas such as national parks, can be harvested. In general, would-be pickers are allowed to take what’s lying on the ground or within arms’ reach, and only in amounts considered reasonable for their own private use. For example, according to the Oberpfalz Echo, the city of Weiden has around 230 fruit trees, and the bounty from many of them is fair game. Online: tinyurl.com/25yd6n4r

Another useful website for those in eager to take advantage of the bounty of Germany’s field and forest is mundraub.org, an online platform for the public sharing of the location of fruits, nuts, berries and herbs.

Those who would rather buy directly from a farm shop could plan a drive to the Hitscherhof in Maßweiler, a village south of Kaiserslautern. On both weekends through Oct. 31, guests can indulge in seasonal foods including pumpkin soup and waffles as the kids get lost in the cornfield maze. Online: hitscherhof.com