Street fests provide space for locals to go with the flow 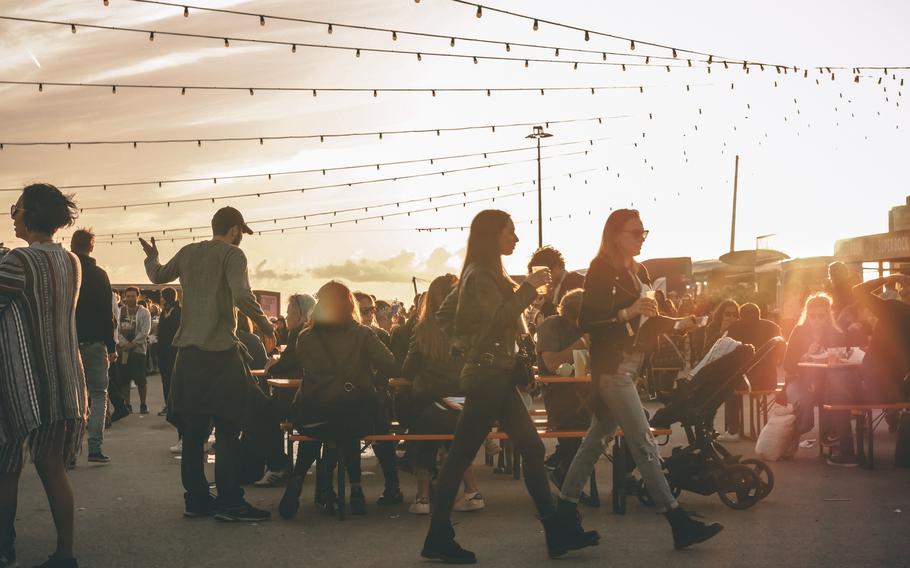 Out with the cars, in with the people: Street fests abound in Europe in the summertime. (iStock)

Many of Europe’s most vibrant festivals celebrate a date in history that’s played a key role in the development of the town or region. Others are dedicated to a particular interest, from craft beers to classic autos to heavy metal music.

Not so the street fest, a stereotype-defying celebration of all things artsy, quirky and slightly magical. At times, they’re a form of political protest, an act meant to reclaim, at least temporarily, a space normally given to cars, commercialism and other trappings of capitalism.

Eclectic combinations of world music, sleight-of-hand, international street foods, cabaret and spaces where kids can mold clay, dress up or learn to play an instrument make these type of gatherings ideal for those willing to abandon rigid agendas and just go with the flow. Here are a few fests to fuel inspiration for a road trip:

Mulhouse, France: Scenes de la Rue transforms this Alsatian city known for its transformation from industrial giant to cultural hub into a theater, dance hall and circus tent with some 30 shows presented by dozens of artists. Through July 17, visitors can enjoy acts such as a nighttime ballet performed by artists clad in black togas and flaming headdresses, an installation of luminous humanoid figures placed upon a canal, or the acrobatics of a frustrated postman dreaming of a better life. Online: scenesderue.fr

Bamberg, Germany: Bamberg Zaubert, translated by its organizers as Bamberg Conjures, sees the city synonymous with beer show its playful side with three action-packed days of circus, theater, puppetry, music and above all, magic. Among the 500 bullet points on the program is Saturday’s showcase of up-and-coming talents in which students from circus and dance groups show their skills. Artists as young as 10 take to the stage; for several, this will mark their first performances for wide audiences. Bamberg Conjures take place 11 a.m.-midnight on July 16 and from noon to 11:30 p.m. on July 17. Entry is free, but viewers are encouraged to reward acts they like with tips. Online: tinyurl.com/yc3yyzbb

Certaldo, Italy: The Tuscan town of Certaldo, located some 20 miles southwest of Florence, always livens up when the artists of Mercantia come to town. This edition is timed to coincide with the full moon, the celestial body that gives inspiration to the program. On this year’s agenda is a performance of Shakespeare’s “The Tempest” featuring pyrotechnics and characters on stilts, Aztec-inspired fire walks and a choral ensemble performing pop favorites. Mercantia takes place through July 16. Entry costs 13 euros for adults, 11 euros for children ages 7-14 and is free for those ages six and under; tickets can be bought online in advance or at the ticket office set up at Piazza Boccaccio. Online: mercantiacertaldo.it/en/

Augsburg, Germany: La Strada promises three days of entertainment in an atmosphere of tolerance and mutual understanding, in which language is secondary to the visual. From July 29-31, acrobats, jugglers and other street artists perform across six venues, as well as informally in the downtown streets. Expect aerial artists, acrobats, jugglers, sword swallowers, contortionists, swing dancers and other acts. Admission is free, but artists are grateful for any hat money received. Online: tinyurl.com/2pyncd92

St. Wendel, Germany: Zauberhaftes St. Wendel celebrates its 20th edition Aug. 5-7 with a program promising fun and good vibes delivered by acts spanning three continents. Magicians and conjurers will dazzle and amuse across 13 designated spaces throughout the compact medieval city as they attempt to be deemed best act by a professional jury. Criteria for that honor include not only the difficulty and mastery of the act, but also their originality and ability to captivate audiences. The best acts are named and honored at an open-end-magic-gala from 8 p.m. on Saturday, Aug. 6. Sunday is billed as family day, with acts performing from 10 a.m.-8 p.m. Entry is free; money in the hat helps the artists pay their bills. Online: tinyurl.com/epwzwvet

Bern, Switzerland: Buskers Bern sees some 150 artists from around the world take to its pretty streets. Music artists perform in styles ranging from Irish trad to Mexican mambo to Americana-Banjo punk. Other acts promising far-from-ordinary performances include a robotic lobster by the name of Exoot, the ridable T. Rex hatchlings known as Magobolla, or Madame Rita, a strip-tease-performing puppet. Buskers Bern runs 6 p.m.-midnight Aug. 11-13. Admission is by purchase of a bracelet, good for all days of the festival, at a cost of 20 Swiss Francs, about $20.65. A child’s bracelet goes for 5 CHF. Online: buskersbern.ch/en

London, UK: The Greenwich & Docklands International Festival, an extravaganza of theater, dance and street arts, takes pride in its organizing principles of diversity of inclusion. This corner of southeast London becomes a microcosm of today’s world through digital artwork highlighting the rich cultural heritage of Ukraine, a production featuring souped-up autos in a car park as a response to rising Islamophobia, and a 13-foot sea giant puppet. The festival runs Aug. 26 through Sept. 11 and includes a mix of ticketed and free-entry performances. Online: festival.org

Würzburg, Germany: The STRAMU International Festival for Street Art, billed as the largest stage-free street art festival in Europe, sees 400 artists from around the world perform across 24 public squares and spaces. Musicians, acrobats and street artists bring their energy and flair to the elegant city by the Main Sept. 9-11. Entry to STRAMU is free, but the purchase of a bracelet helps offset organizational costs. Online: stramu-wuerzburg.de