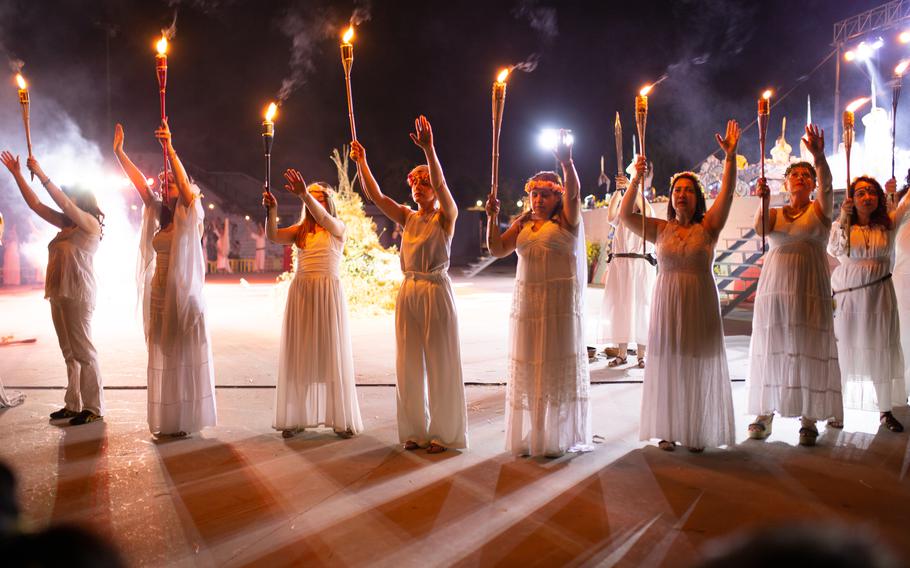 People celebrate St John’s Eve around a bonfire in Spain. The birth of John the Baptist is observed June 24, and the revelry usually involves parades and bonfires. (iStock)

As the summer solstice approaches, Europe fetes the occasion with both ancient rites and more recently-minted traditions. From Sweden to Spain, the long luscious days bathed in light are celebrated with song and dance, balls and bonfires. What at first glance might appear to be quite diverse activities have one thing in common: they foster a sense of communal experience. After these past two years, the chance to once again gather in numbers is particularly poignant. Here are just a few ways to let all the glorious light of the season shine on in:

Wachau-Nibelungengau-Kremstal, Austria: This area of stunning vineyards perched prettily alongside the Danube celebrates summer solstice by launching thousands of floating lights into the river and setting off fireworks high above the hills. More than 20 villages lay on festivities at which their esteemed wines and regional products take center stage, while those not content to remain in one place can party on board one of the numerous illuminated ships plying the waters.

Most of the celebrations take place on two key dates, June 18 and June 25. The towns of the Wachau celebrate on the first Saturday; those of the Nibelungengau party down a week later. A good bet on the June 18 date is the pretty market town of Spitz, whose river promenade stretches over a mile long. Festivities there kick off at 3 p.m., and bonfires and torches set the vineyards alight from 9:45 p.m. Extra trains laid on between Spitz and Melk help locals and visitors make it safely home. On June 25, Pöchlarn lets loose with its traditional “Fire Magic Nibelungengau” midsummer festivities, which include concerts and “Austropop meets Rock” on stage. Note both celebrations are weather-dependent and will be canceled in the event of stormy weather. Online: tinyurl.com/5n6bcwht

Tiroler Zugspitz Arena, Austria: Along the Austrian-Bavarian border at the foot of Germany’s tallest mountain, seven villages beckon year-round with a plethora of outdoor activities: Ehrwald, Lermoos, Berwang, Biberwier, Bichlbach, Heiterwang am See and Namlos. In a tradition dating back to the 14th century, the time of the longest days and shortest nights is celebrated with the lighting of spectacular bonfires high up on the sides of the mountains. The fires are all the more astonishing for the shapes in which they are built— motifs depicting crosses, deer, hearts or other symbols. They are the work of some 300 skilled mountaineers, who carry sacks filled with sawdust and rapeseed oil up steep terrain to an altitude of up to 6500 feet and set some 10,000 individual fires alight before making their descent. In 2010, the tradition was inscribed into the UNESCO World Cultural Heritage’s list of intangible culture.

The 2022 edition of “Sonnwendfeur” is slated for June 18. Ehrwald, with its wide basin, is considered one of the best viewing spots; Lermoos and Biberwier are also good bets. The sides of the Wetterstein Massif, Mieming Range and the Lechtal Alps will light up in the mellow glow from around 9:30 p.m. In the event of inclement weather, the spectacle will take place on June 25. Online: tinyurl.com/yc4syece

France: It’s not light but sound that moves France to its very core. On June 21 each year, the tiniest of villages and greatest metropolises alike sway to the sounds of music across all genres, from jazz to techno, classical to hard rock. Eager amateurs and seasoned pros alike take to stages to bring their musical visions to the fore in free concerts held in sports fields, bars, town squares and castle gardens. As one might anticipate, the grandest of cities hold the grandest of spectacles. Parisian venues including the Place de la Republic, Place de la Bastille and Parc de la Villette will be heaving with bodies on the night. Some of the curiosities on this year’s lineup include the Orchestra of Paris next to the Louvre’s Pyramide, homages to jazz greats Ella Fitzgerald, Sarah Vaughan and Billie Holiday at Sunset Sundown, and a night of hip-hop from Ireland, France and Senegal at le Centre Culturel Irlandais in the 5e arrondissement. Online: tinyurl.com/536ukj49

Bayerische Wald, Germany: Along with Grainau near the Zugspitze, this vast wooded area in eastern Bavaria is well known for its solstice celebrations. Riedenburg is just one of several towns that will mark the occasion with a festive flair. On June 18, live music plays across six stages, young folks can enjoy bungee trampolines and walking waterballs, and a bazaar offers the chance to buy children’s clothing. As darkness falls, street foods go on sale, a light and fire show dazzles, and fireworks light up the night. Entry is free. Online: tinyurl.com/yakzdzec

Spain: On June 24, the birth of Saint John the Baptist is celebrated across many parts of the country, particularly in Catalonia, Galicia and Valencia. On the eve and the day itself, lighting bonfires and setting off fireworks are common forms of revelry. Some communities organize fire runs in which those dressed like devils dance wildly to the sound of drumbeats. Enjoying a dip in a lake, river or the sea is another traditional activity. For those living on the coast, on the eve of the day, it’s traditional to head to the beach with friends and family, light a bonfire, jump over it three times and bathe in the sea at midnight.

The county’s biggest celebrations of the day take place in Alicante, a pleasant port city on the Costa Blanca. From June 20 through 29, the “Fogueres de Sant Joan” celebrations are carried out with a program that varies little from year to year. Things warm up with a proclamation and the setting up of the bonfires, grow more heated with parades and processions of effigies, and reach their peak on June 24, when large satirical statues made of wood are set alight. Online: tinyurl.com/3xrvunfh