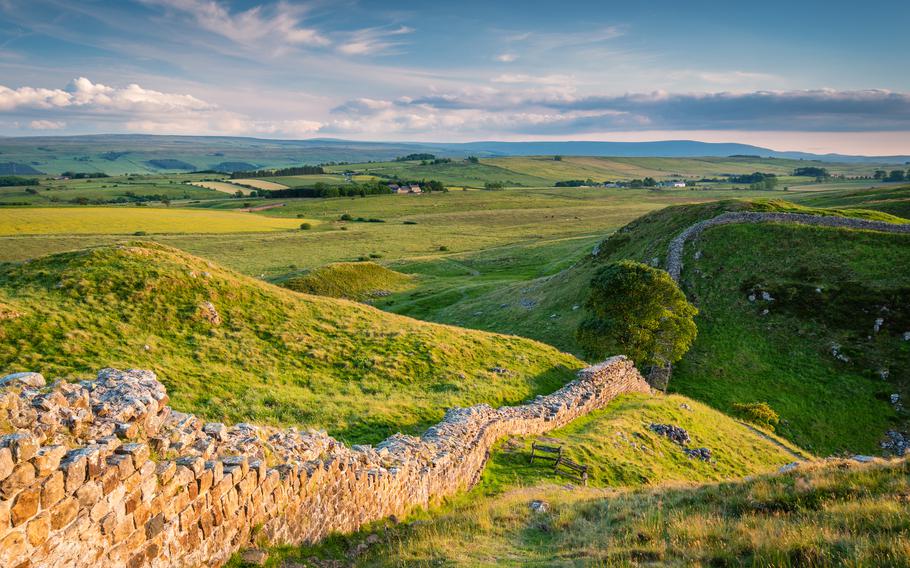 Many stone bridges and aqueducts built millennia ago are still standing, a testament to the colossal efforts and engineering prowess of our Roman forebears. But not all of man’s most magnificent structures were conceived to bring things together.

While Europe can boast of no equivalent to the Great Wall of China, it has plenty of examples of mighty walls and fortifications built to withstand onslaughts carried out with the most lethal weapons of the day.

Among the most famous of European constructions is Hadrian’s Wall, a 73-mile structure cutting from east to west across the width of northern England. The year 2022 is significant in that it marks 1,900 years since the wall was built to separate the Romans from the “barbarians” to the north. A number of activities will celebrate the milestone year as part of the aptly-named Hadrian's Wall 1900.

Here are a few highlights especially worthy of mention:

The Segedunum Roman Fort & Museum in Newcastle offers an exhibition titled “Building the Wall: An exhibition exploring who built Hadrian’s Wall and how” through Oct. 1, 2022.

The Great North Museum: Hancock, also in Newcastle, offers a digital projection map of the wall on a monumental scale through Sept. 1.

Vindolanda and the Roman Army Museum in Hexham, Northumberland archaeological site offer the public the opportunity to observe excavations taking place on site through Sept. 23, 2022.

Chesters Roman Fort, an English Heritage attraction, offers a program called “Hail Hadrian!” with re-enactors, Roman artillery, archery and cavalry shows and a tent in which to try on the armor of a Roman soldier, July 23-24.

The town of Corbridge offers “A Midsummer's Evening in Corbridge, “ with music, dancing, street food and market stalls, June 23.

Towns and villages along the length of Hadrian’s Wall host a Festival of Saturnalia, modeled after the ancient Roman winter celebration held in honor of the god Saturn, Dec. 17-23, a fitting end to the festivities marking Hadrian's Wall 1900. Online: 1900.hadrianswallcountry.co.uk

What’s officially known as The Upper Germanic-Rhaetian Limes refers to the remains of the 340-mile border wall that once divided the Roman Empire from the Teutons. The fortification running between the Rhine and Danube rivers is considered one of the most outstanding archaeological monuments in Central Europe. A UNESCO World Heritage Site since July 2005, its length can be explored by means of a road trip with stops to take in its many museums, fortresses, watchtowers and other features; other options include cycling along a hilly and challenging bike path or hiking a trail that traces the route.

A number of events staged along the German Limes bring its fascinating history to life include:

Römerwelt in Rheinbrohl hosts a “light” edition of the International Reenactment Market, with exhibits showing wares ranging from silver to leather to wool, April 23-24, as well as a Roman Days weekend May 14-15.

The Saalburg Museum in Bad Homburg vor der Höhe offers a weekend devoted to exploration of the food and drink of the Romans, with hands-on activities and sampling on June 5-6 as well as a day that visitors can craft items typical to the Romans on July 3.

The LIMESEUM and Römerpark Ruffenhofen in Wittelshofen offers a Roman crafts market with Roman soldiers and civilians June 4-5 and reenactments of Roman camp life Sept. 10-11.

The Museum Quintana in Künzing offers free entry and activities for children on May 15, which is International Museum Day, as well as a special exhibition titled “Gladiators – Superstars of the Ancient World,” May 20-Nov. 20. Online: tinyurl.com/37tczdkt

Thick walls towering up to 50 feet surround the city of Lugo in the province of Galicia. Built by the Romans during the third and fourth centuries, these remarkably intact fortifications make an evocative backdrop for costumed celebrations. The Arde Lucus Festival celebrates Lugo’s history, peopled with not only Romans but Celts and countless pilgrims who passed through on foot on their way to Santiago de Compostela. For four days, the city lays on a program that typically includes crafts markets, a Celtic wedding, military camps, battles, music, dance, food and drink. Arde Lucus takes place June 9-12. Online: ardelucus.com

The Roman town of Aventicum, founded around 16-13 B.C., served as the administrative center of the Helvetians, the Celtic tribe occupying the Swiss plateau at the time of its first contact with the Romans. The city known today as Avenches sat alongside a guarded military highway, and a military post guarded its arterial roads and harbor. In the first century A.D., the city’s protective walls went up; an amphitheater was also erected around this time. Avenche’s Roman Museum shines light on the romanization of the town and the daily life of the Helvetians.

Fast forward to the present day and the amphitheater is the site of two noteworthy events. The Rock Oz’Arènes are concerts performed by international artists; Status Quo is one of the headliners of the next edition running Aug. 10-14. The Avenches Tattoo, which features some 500 military and civil musicians and is the country’s second-largest event of its kind, takes place Sept. 1-3. Online: tinyurl.com/232km4tu