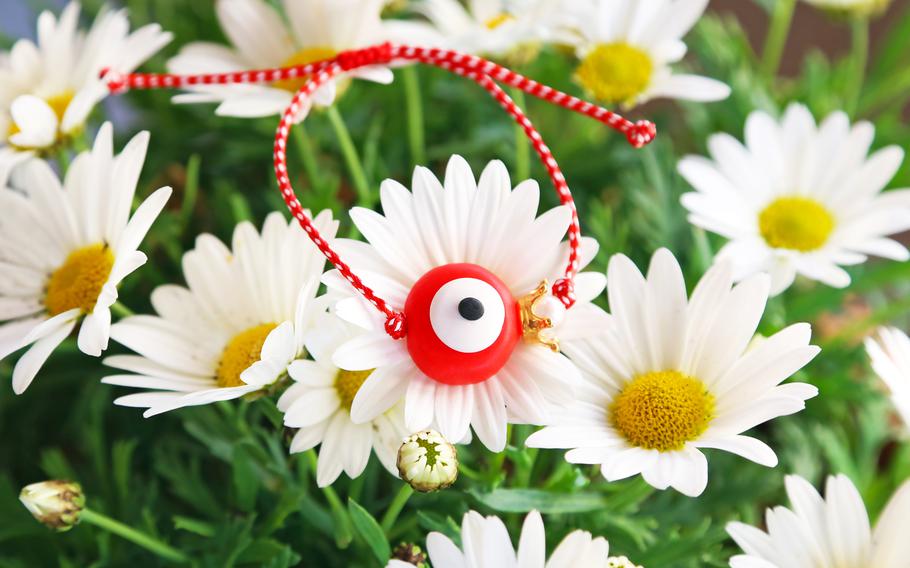 Greek tradition holds that Martakia bracelets should be tied to the first signs of spring to wish the crop good luck. (iStock)

On the afternoon of March 20, Europe will welcome the spring equinox and with its passing, longer hours of daylight and the budding and blossoming of flowers and trees. Throughout time, people have welcomed the season that is associated with new life and the sowing of crops with rituals and traditions that remain with us to date. Even in times of trouble, the coming weeks will bring plenty of ways to welcome spring on a hopeful note.

England: The origins of the ancient tradition of Well Dressing are lost to time, but it is thought the practice originated with the pagan custom of making sacrifice to the water gods believed to inhabit wells and springs. Such traditions were later adopted by the church, particularly in rural Derbyshire. The village of Tissington is among several towns that continue to adhere to the custom, with its Well Dressing date always timed to coincide with Ascension Day. The process involves soaking a board, applying a thin layer of wet clay, tracing an outline and filling in the spaces with petals, berries or other natural materials as if they were shingles on a roof. The completed panel generally lasts for about a week. Tissington’s next Well Dressing takes place May 26-June 1. Online: tinyurl.com/yc2e546a

Germany: In some parts of southwest Germany, saying farewell to winter takes the form of a cleansing ritual known as Stabaus, literally, “out with the dust.” The date of festivities usually coincides with the religious holiday known as Laetare Sunday, the fourth Sunday of Lent and a day for hope and joy within an otherwise somber season. Laetare Sunday, which falls on March 27 in 2022, will be met with many of the parades and festivities that had been put on pause due to COVID-19 restrictions; some such festivities remain on hold.

Heidelberg’s “Sommertagszug,” in which participants march through the Old Town to music while carrying sticks decorated with a pretzel, egg and colorful ribbons, starts at St. Anna Gasse and leads along the main street to the Market Square, where a battle between summer and winter follows. Festivities are set to take place from 3 p.m.-4:30 p.m. March 27. Online: tinyurl.com/mwy5d77r

In Speyer, the annual “Sommertagumzug,” a procession of the town’s youngest citizens along the Maximilianstraße, is followed by the burning of a large snowman in the cathedral garden. Festivities are slated for at 2:30 p.m. March 27. Online: tinyurl.com/48a7tv4m

Greece: As the month of March begins, tradition holds that it is time to adorn a “Martakia” bracelet woven out of red and white yarn. The white symbolizes purity, whereas red is the color of life and passion. Such bracelets were worn to protect the wearer not only from disease but also the damaging rays of the sun, which would spoil one's highly coveted pale complexion. At the end of March, or when the bracelet’s wearer spots a sign of spring such as a stork, swallow or budding branch, he or she should tie the bracelet to a rosebush or fruit tree, in doing so transferring its positive energy to the future crop. Similar bracelets and traditions appear throughout the Balkans.

Luxembourg: “Bretzelsonndeg,” or Pretzel Sunday, is celebrated on the fourth Sunday of Lent. According to tradition, a man should offer his would-be sweetheart a Luxembourg-style pretzel, which is made of puff pastry, frosted with fondant icing and covered in almond slivers. (The man may have been tipped off by a custom that would take place even earlier in spring; on “Buergsonndag,” women would throw wood into a fire while shouting the names of their love interests.) Should the feelings be reciprocal, the man receives an egg on Easter Day. If not, he’ll get an empty basket: “De Kuerf kréien” is a Luxembourgish term for getting rejected. In leap years, the roles are reversed, and it’s women who offer the pretzels.

To mark the day, a large parade will usually pass through Luxembourg City as the Pretzel Queen passes out the sweet treats. Pretzel Sunday falls on March 27 this year, but the city has yet to confirm festivities will take place. Online: tinyurl.com/yxtpkb76

Poland: According to ancient Slavic custom, Marzanna, a goddess symbolic of winter, pestilence and death, could only be stopped by drastic measures. On the first day of spring, Marzanna, represented by a straw doll wrapped in colorful linens and decorated with ribbons, beads and other adornments, was set alight, thrown into a river, retrieved and paraded through town. In many places, the kindergartners of today continue to create these dolls without subjecting them to such grisly and environmentally unsound ends. Online: tinyurl.com/49jfwjp6

Switzerland: An annual highlight for Zurich’s residents is the day known as Sechseläuten, or the six o'clock ringing of the bells. The festival harks to the 16th century, when trade unions known as guilds would extend the hours of their workers by an hour in sync with the increasing hours of daylight. The ringing of the bells of the Grossmünster cathedral at 6 p.m. on the first Monday following the spring equinox would announce the change of schedule. Nowadays, the event takes place later in the year: festivities are slated for April 25 in 2022. On the day, crowds will gather in the streets to watch a procession of some 3,500 costumed guild members, 350 horsemen and 50 carriages. The parade, which gets underway along the Bahnhofstrasse at 3 p.m., ends at the Sechseläutenplatz, where at 6 p.m., a gigantic effigy of a snowman, known as the Böögg, is set alight. Just how long it takes for the Böögg’s firecracker-laden head to explode serves as a predictor for the upcoming summer. The more quickly it explodes, the better the outlook for warm and sunny conditions. Online: zuerich.com/de/besuchen/sechselaeuten