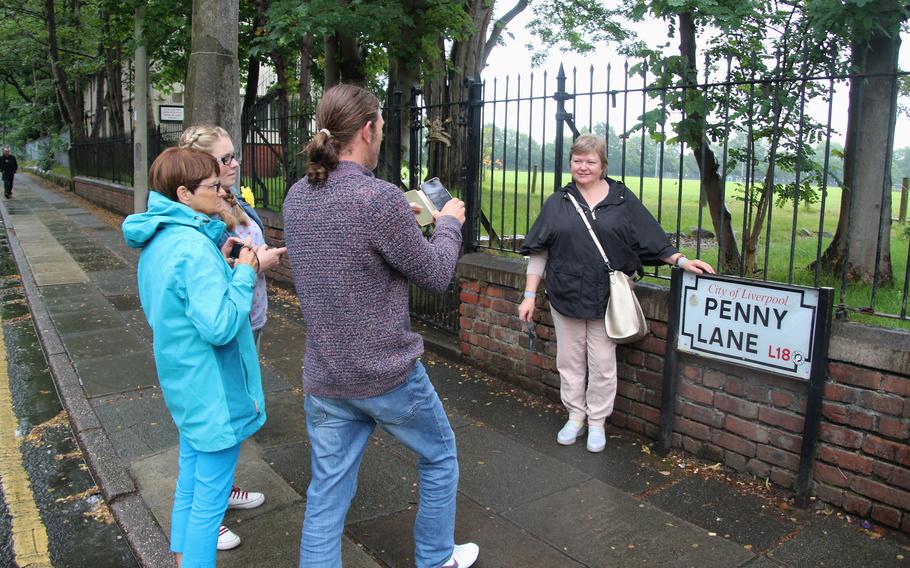 Tourists photograph each other in front of the street sign of Penny Lane in 2019. All four Beatles grew up in Mossley Hill, a suburb of England’s Liverpool, and their song “Penny Lane” is full of local references. (iStock)

After more than two years of forced abstinence from large-scale music festivals, many are hoping and praying to have the chance to once again rock out en masse in 2022. In the meantime, we can visit some of the places that inspired our favorite artists. Here are just a few European places mentioned in songs that rock fans of a certain age are likely to remember.

Hiddensee, Rügen, Germany: For her military farewell ceremony in December 2021, former German chancellor Angela Merkel surprised many by choosing a song recorded by East German punk rocker Nina Hagen titled “Du hast den Farbfilm vergessen,” or “You forgot the color film.” The hit song released in 1974 was widely seen as a critique of the gray and drab life led by citizens of the German Democratic Republic and the Eastern Bloc countries. In the song, a young couple is vacationing at the Hiddensee, an unspoiled area of white sand beaches, rugged cliffs and pine forest off the west coast of the island of Rügen in the Baltic Sea. The sea buckthorn mentioned in the first line of the song continues to thrive in this area of outstanding natural beauty that attracted countless writers, musicians and intellectuals back in the GDR era. Online: tinyurl.com/2efze43n

London, UK: In 1978, American songwriter and recording artist Warren Zevon scored an unlikely hit with a song titled “Werewolves of London.” One interpretation of this song with a peppy and instantly recognizable piano intro is as a parody of a slick lady’s man. In the first verse of the song, the werewolf is looking for Lee Ho Fook's, where he is “gonna get a big dish of beef chow mein.” The Michelin star-awarded Chinese restaurant mentioned was found on 15-16 Gerrard Street in Chinatown, in London’s West End. While this particular restaurant is long closed, the address’s current occupant serves cocktails and dim sum. Trader Vic’s, the bar where a werewolf was spotted with a pina colada in his hand, is a tiki bar in the London Hilton on Park Lane. A patron here might wish to order a Mai Tai instead, as the potent rum cocktail is a Trader Vic’s original. Online: tradervicslondon.com

Penny Lane, UK: Penny Lane, the street made famous by the 1967 Beatles song of the same name, was inspired by the childhood experiences of Paul McCartney and John Lennon. For many years, Beatles fans have been inspired to make the pilgrimage to this lively street lined with independent shops. The abandoned structure found where the street begins at the intersection of Church Road and Smithdown Place used to serve as the bus stop referenced in “the shelter in the middle of a roundabout.” A barber shop stands in the very spot alluded to in the song, and the Penny Lane Fish and Chip shop serves patrons the “four of fish” sung about by the Fab Four. Online: tinyurl.com/5azax8jy

Solsbury Hill, UK: After lead singer Peter Gabriel left Genesis in 1975 to concentrate on his own interests, he penned a highly autobiographical song dealing with his break from the band. During this time, Gabriel found solace through long walks along Little Solsbury Hill. The 625-foot hill is located just to the northeast of the city of Bath, above the village of Batheaston. The site, owned and managed by the National Trust, offers views over Bath and the surrounding countryside and features the remains of a fort dating back to the early Iron Age. According to one theory, the temple that once stood atop the hill was built by Bladud, king of the Britons, to honor Apollo, the Roman god of music, poetry, art and light. Little Solsbury Hill is also the possible site of the Battle of Badon, fought around 496 AD between the Saxons and the British.

Gabriel’s 2011 album titled New Blood features new versions of his older songs, including a remake of Solsbury Hill with an intro recorded on site at the the actual Solsbury Hill. Gabriel’s post-Genesis career has included the establishment of WOMAD, the World of Music and Dance festival, which has thrived and expanded around the world. The 2022 edition of WOMAD is set to play out July 28-31 in Charlton Park, a venue in Malmesbury, UK. Online: tinyurl.com/bddat2bz

Montreux, Switzerland: Having hosted its famous jazz festival since 1967, swish Montreux has long been associated with music. In 1971, Frank Zappa and the Mothers of Invention were playing a gig at the city’s casino when one of the concertgoers fired a flare gun, instantly setting the structure’s wooden roof aflame. The English rock band Deep Purple happened to be in Montreux at this time, using a mobile recording studio they had rented from the Rolling Stones. The sight of the venue going up in flames inspired the band’s iconic “Smoke on the Water.” Lyrics to the song with the famous guitar riff include the line “Funky Claude was running in and out, yeah, pulling kids out the ground.” The Claude in question was jazz festival organizer Claude Nobs, credited with helping firefighters to rescue many of the attendees. The rebuilt casino can be visited today, as well as Funky Claude's Bar, a cocktail bar and live music venue featuring a memorial to Deep Purple. Online: tinyurl.com/5n6jahmk