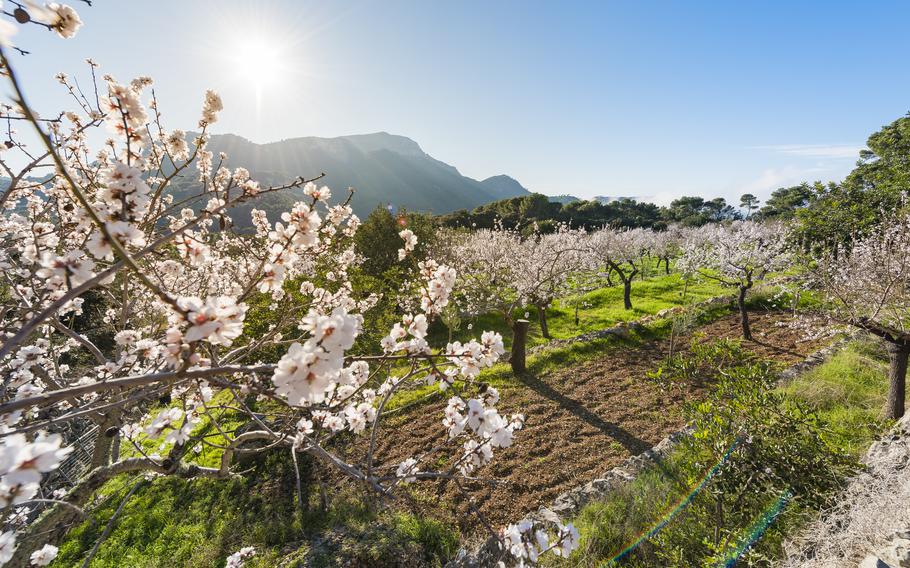 Almond fields will soon be in bloom across Mallorca, Spain. (iStock)

From mid to late February, groves of almond trees scattered throughout Europe signal the coming of spring by bursting into seas of blossoms in shades of tender pink and white. Many places blessed with an abundance of these graceful trees celebrate the onset of the warmer months of the year with lively festivals; in 2022, celebrations go forward in some countries while remaining on hold in others. With or without the side activities, here are some places to not only take in the blossoming beauty of the almond tree but to discover the history and culture of the vicinity.

France: While almond trees are cultivated throughout the region, Saint-Rémy-de-Provence can lay claim to the landscapes that inspired Van Gogh. From May of 1889 to May of 1890, the painter was voluntarily interned in Saint Paul de Mausole, an 11th century monastery transformed into a psychiatric clinic. Here Van Gogh made over 100 paintings of the surroundings, including those of almond trees in full bloom. Nowadays, the premises houses a cultural center featuring a reconstruction of Van Gogh's hospital room with its view of the field he would contemplate from its window, an art gallery, botanical route and more. Online: tinyurl.com/357rjypy

Germany: The Pfälzer Mandelpfad, or Palatinate Almond Path, is a 60-mile themed route stretching along the German Wine Road between Bockenheim in the north and Schweigen-Rechtenbach in the south. The route passes by small clusters of almond trees which add tender bursts of color to an otherwise drab landscape. Along its way are seven “stages” well suited to short hikes. One of the villages best known for its almond tree plantings is Gimmeldingen, just north of Neustadt. The town hosts one of the region’s earliest wine festivals on a date announced at the last minute in order to coincide with the peak of the blossoming; this year’s festival runs from March 1-April 18. Online: mandelbluete-pfalz.de

Portugal: The country’s Almond Blossom Route traces through the Douro region, as well as the regions of Freixo de Espada à Cinta, Mogadouro, Torre de Moncorvo and Vila Nova de Foz Côa. Towns and villages along the route time craft markets and celebrations to sync with the blossoming. A possible itinerary proposed by the Rota do Douro transportation company commences in the village of Pocinho, known for its railway station decorated with tile panels depicting scenes from agricultural life and wine production. From there, it’s on to Vila Nova de Foz Côa, the area with the Douro’s highest density of almond trees. The town’s 25,000 year old rock engravings are a year round attraction. The next stops are Freixo de Numão, with its Neolithic archaeological sites, and the village of Penedono, with its triangular 11th century castle. The following two towns, Marialva and Castelo Rodrigo, are included on the list of 12 Historic Villages of Portugal for their largely intact medieval architecture. The tour’s last stop is Barca d’Alva, at the confluence of the Douro and Águeda rivers. Barca’s “Festa do Almendro”, a showcase for the region’s cuisine and handicrafts, typically takes place in late February. Online: tinyurl.com/2p8mcjrh

Sicily: On the island’s southwest shores, the vast archaeological site of Agrigento attracts with its well-preserved Greek temples. In early spring, this UNESCO World Heritage site typically plays host to a festival timed to coincide with the blossoming of the almond trees. The international weeklong celebration of folklore known as the Festa del Fiore del Mandorlo has been canceled in 2022. Online: tinyurl.com/4zxw8ywj

Driving itineraries promising the spectacle of blossoming beauty include the Val di Noto to the southeast. The rolling hills between Ragusa and Syracuse, blessed with warm winds from the sea and mountains to protect them from the cold, are fertile grounds for almond plantations.

Almond based products to look out for throughout the year include the sugared almonds known as “confetti” in Italian. Each color denotes a specific occasion, from pink and blue for births and gold to commemorate a 50th wedding anniversary. “Frutta di Martorana” refers to fruits and vegetables crafted from marzipan.

Spain: Spring typically arrives in Mallorca earlier than on the mainland, and the island’s seven million almond trees are usually in full bloom between late January and early March. Many almond tree plantations are concentrated between Selva and Son Servera, and the almond blossoms on the east coast and the interior of the island are particularly lush. Some of the first buds to open appear in the region around Llucmajor. North of the island’s capital city of Palma de Mallorca, Marratxi, Selva and lloseta are prime bloom spotting destinations, as are Sóller or Andratx. Almond-based products to try and buy any time include the almond liqueur known as Flor d'Ametlla, turrón nougat, jams, soaps, skin creams and baked goods. Online: tinyurl.com/2xxdp72v