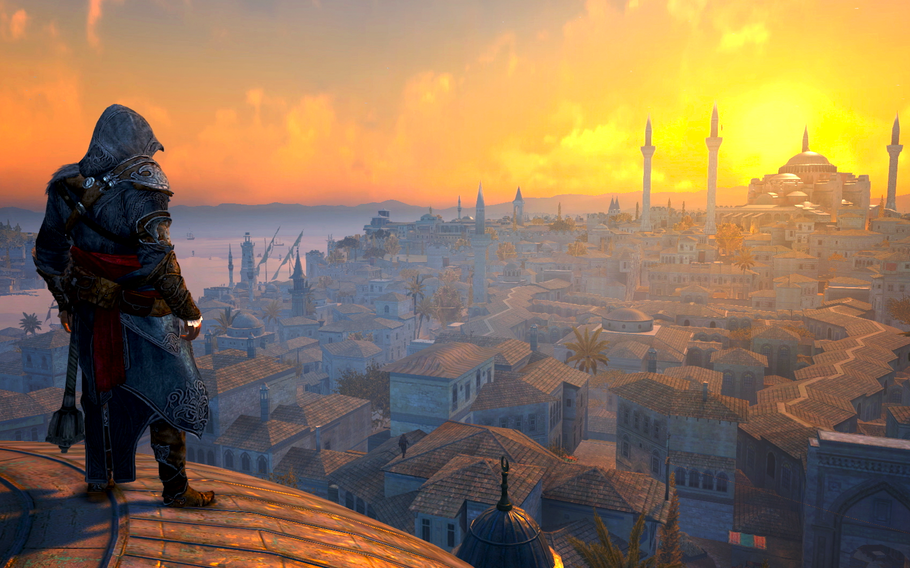 Travel inspiration has long come about through the things we see on screen, and these days, it’s not just movies and TV series that can pique our interest in new places to visit. Gamers who love to travel may notice more than just a passing resemblance between some of their favorite fantasy worlds and dozens of real-life destinations scattered throughout Europe.

Paris, France: Ubisoft’s wildly popular Assassin's Creed video game franchise weaves sci-fi and historical fiction with real-world historical events and places. The settings of just a few of the 12 games released to date include Ancient Greece, the Italian Renaissance and Victorian England. Assassin's Creed: Unity takes players through Paris at the time of the French Revolution, 1789 -1794 as it follows the Assassin Arno Dorian in his efforts to expose the true powers behind the revolution and exact revenge on the murderers of his adoptive father. Landmarks appearing in the game include the Bastille, Palais de la Cité, Versailles, Holy Innocents’ Cemetery, Luxembourg Palace and the Champs-Élysées, among others. The game’s rendition of the Notre-Dame Cathedral, which reportedly took one of the Ubisoft developers two years to recreate brick-by-brick, was suggested as a tool that architects and artisans could use in efforts to restore the cathedral following the devastating fire of April 2019. Although the game’s cathedral had been tweaked to such a degree it wasn’t useful, the company did make a 500,000 euro contribution to restoration efforts.

Monteriggioni, Italy: Assassin's Creed II breathes life to Renaissance Italy with stops in Florence, Venice, San Gimignano, and Forlì, as well as the Tuscan town of Monteriggioni. Following the game’s release in 2009, the town saw an uptick in visitors eager to compare its spaces with those they’d explored on screen— so much so, Monteriggioni’s tourism office designed a walking itinerary taking in sights including the castle and the walkways atop its defensive walls.

Poland: Books penned by the Polish author Andrzej Sapkowski have inspired both a Netflix fantasy series and a game. The Witcher 3: Wild Hunt introduces players to Novigrad, whose name translates to “New City” in several Slavic tongues. The game’s Free City of Novigrad, the biggest city in No Man’s Land is inspired by the historical Free City of Danzig. Danzig, also known as Gdańsk, was a city-state during the time of the Napoleonic wars in 1807-1815 and once again in the inter-war years 1920-1939. In the harbor of this Baltic city is found a wooden crane that has been used to hoist cargo since the fifteenth century; the fictional Novigrad has a strikingly similar structure. Another feature of the real Danzig is reflected in Granary Island, rebirthed in the game as Hierarch Square. Astute observers will note similarities in both cities’ coats of arms, red shields topped with golden crowns.

Other real Polish sites reflected in the game include the town of Zalipie near Tarnow, whose cottages feature floral designs like those in the fictional Lindenvale. The box-like wooden windmill in the Maurzyce Open-Air Museum looks like Lucian’s Windmill. Wroclaw’s Piasek Island, perched in a river and approached by a narrow bridge, seems the likely inspiration for the made-up town of Oxenfurt.

Great Britain: Playground Games’ racing video game Forza Horizon 4, set in an environment inspired by rural England and Scotland, offers something most other video games neglect: the changing of the seasons. English places to visit both virtually and in person include the village of Ambleside and Derwent Lake in the Lake District and Bamburgh Castle along the coast of Northumberland. Landmarks from Edinburgh, Scotland appearing in the game include the Scott Monument, Edinburgh Castle and Arthur's Seat. Glenn Rannoch in the Scottish Highlands also makes an appearance.

Istanbul, Turkey: In Naughty Dog’s Uncharted 2: Among Thieves, an old Mongolian lamp housed in the game’s so-called Istanbul Palace Museum appears to hold the key to finding the lost fleet of Marco Polo. The real-life Topkapi Museum, an old Ottoman palace that was converted into a national museum in the 1920s, is its likely inspiration.

Venice, Italy: Although it goes by the name of Altissia, one of the settings of the fifteenth chapter of the Final Fantasy saga clearly takes its inspiration from Venice. In addition to the game’s rendering of landmarks such as Saint Mark's Basilica, The Bridge of Sighs and the arched spiral staircase of the Palazzo Contarini del Bovolo, smaller details such as street signs, workshops, fashion boutiques and gondoliers wearing striped shifts evoke the ambiance of La Serenissima.