European sites remind visitors of the high cost of war 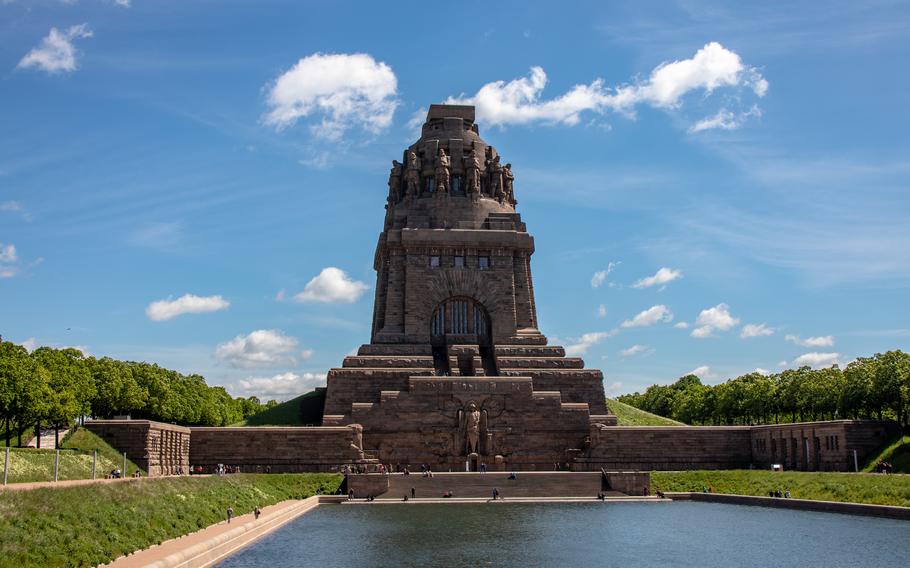 The Monument to the Battle of the Nations in Leipzig, Germany, commemorates the defeat of Napoleon’s French army. (iStock)

As the grim prospect of war casts a pall over Europe’s eastern frontier, those in power could do well to reflect upon the horrors of combat and the terrible human cost. A visit to any one of too many European sites where blood has been spilled, recently or hundreds of years ago, should serve as a sobering reminder of what’s at stake when two sides go to war.

Detmold, Germany: The Hermann Monument, Hermannsdenkmal in German, recalls the Battle of the Teutoburg Forest, fought in 9 A.D. Roman soldiers were defeated by the tribal forces led by the German leader Arminius (Hermann), who lured the Roman general Varus and his three legions into an ambush in the forest. Losses on the Germanic side are unknown, but thought to be minor; 16,000-20,000 fighters on the Roman side were estimated to have perished. The battle put an end to the long period of Roman expansion in northern Europe.

The Hermann Monument, completed in 1875, was constructed on what had previously been thought to be the site of the battle. A copper statue atop on an iron columned pedestal rises 170 feet into the air, the warrior raising his sword high into the air, where it serves as a lightning rod.

Although some historians continue to debate the true location of the Battle of the Teutoburg Forest, there’s much evidence to support it took place near Osnabrück. The Varusschlacht Museum and Park Kalkriese brings the history of this site to life based on more than 30 years of multidisciplinary research. Through modern technology, Varus and Arminius are given the chance to openly discuss their world views and differences. The award-winning museum is open daily (closed Mondays Nov.-March); adult admission costs 9.50 euros. Online: kalkriese-varusschlacht.de

Leipzig, Germany: The Monument to the Battle of the Nations, Völkerschlachtdenkmal in German, remembers the Battle of Leipzig, also referred to as the Battle of the Nations, fought Oct. 16-19, 1813. It commemorates the defeat of Napoleon's French army by the coalition armies of Russia, Prussia, Austria and Sweden, led by Tsar Alexander I of Russia and Karl Philipp, Prince of Schwarzenberg. Some 600,000 soldiers from a dozen nations fought in the battle, and more than 100,000 were killed, making it the biggest battle of the 19th century. The monument itself saw fighting in World War II, as Nazi forces in Leipzig made their last stand against U.S. troops there.

The 300-foot-tall concrete and granite structure, completed in 1913 to mark the 100th anniversary of the battle, stands at the spot from which Napoleon ordered the retreat of his army. Fronted by a large reflection pool, 364 steps lead up to a viewing platform offering views of the city and the fields in which the bloody battle was fought. The Forum 1813 Museum exhibits weapons, uniforms, equipment and personal mementos of the soldiers. The monument and the museum are open daily; adult entry costs 10 euros. Online: tinyurl.com/2p99caaf

Somme, France: The Battle of the Somme, fought July 1-Nov. 18, 1916, was one of the largest battles of World War I, and among the bloodiest in human history. The joint operation between British and French forces was intended to achieve a decisive victory over the Germans on the Western Front. Modern weaponry, a compact battlefield and failures by British military leaders led to the unprecedented slaughter of countless waves of young men. With more than one million casualties and the loss of 300,000 lives, it’s often regarded as one of the single largest battles in the history of warfare.

Numerous memorials scattered throughout the region commemorate the soldiers involved in the fight, who represent some 20 nationalities. The 57-mile Remembrance Trail between Péronne and Albert links memorials, cemeteries and vestiges of the battles. Included on the route is The Memorial at Thiepval, a majestic arched structure bearing the names of the more than 72,000 British and South African soldiers killed on Somme battlefields before March 1918 who have no known grave. Maintained by the Commonwealth War Graves Commission, it is the largest Commonwealth war memorial in the world. Online: www.visit-somme.com/great-war

Cassino, Italy: The Battle of Monte Cassino refers to a series of four offensives conducted by the Allies during the Italian Campaign of World War II from Jan. 17-May 18, 1944. The objective was to break through German temporary defensive positions known as the Winter Line and occupy Rome. Overlooking the town of Cassino was the strategically located Monte Cassino, a historic hilltop abbey founded in 529. On Feb. 15, following repeated artillery attacks on Allied troops that led their leaders to conclude the Germans were using the abbey as an observation post, American bombers pummeled it with tons of explosives, leaving it a roofless shell and killing many civilians who had sought shelter there. The raid failed to achieve its objective, as German paratroopers quickly occupied the area, establishing advantageous defensive positions amid the ruins. The German defenders were finally driven from their positions, but at a high cost: The capture of Monte Cassino resulted in 55,000 Allied casualties; German losses were estimated at some 20,000 killed and wounded.

Visitors to Monte Cassino today can visit the renovated abbey and its museum, Hangman’s Hill, the Polish War Cemetery and Visitors Center, the Cassino War Cemetery and the Cassino Memorial, which commemorates more than 4,000 Commonwealth servicemen who took part in the Italian campaign. On July 8, 2021, an Indian Army Memorial was inaugurated to memorialize the more than 5,000 Indian soldiers who laid down their lives in the epic battle. The remains of the American soldiers who fell in the Battle of Monte Cassino are interred in the Sicily-Rome American cemetery in Nettuno. Online: tinyurl.com/yckd365j