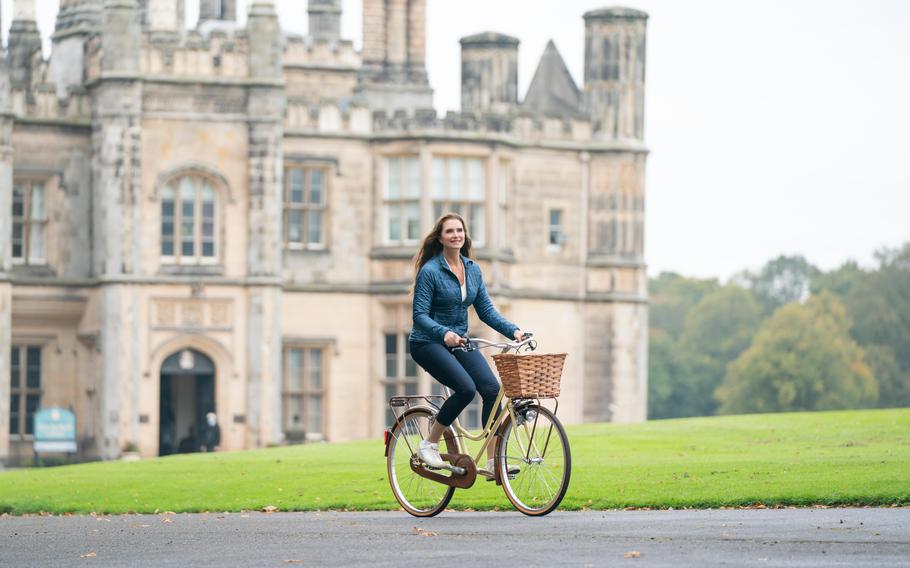 Brooke Shields stars in “A Castle for Christmas,” a new Netflix movie shot on location in two Scottish residences. (Netflix)

With the seemingly never-ending pandemic keeping us stuck on our sofas when we’d rather be occupying plane seats, streaming services have kept the films and TV series that fuel travel fantasies coming at a steady pace. This past year alone has provided lovers of all things travel with plenty of European destinations to add to their wish lists the minute it becomes safe to hit the road again. Here are a handful of on-screen places featured in 2021 releases one can aspire to see in real life.

“A Castle for Christmas”: This romantic film stars Brooke Shields as a best-selling author who journeys to Scotland to escape a scandal and falls in love with a castle as she butts heads with its duke owner, played by Cary Elwes. The film is available for streaming on Netflix.

The titular castle isn’t a real castle but a mansion by the name of Dalmeny House. The gorgeous Gothic-revival building is the property of the Earl and Countess of Rosebery. Interior scenes were shot there, as well as in the Barnbougle Castle, a 13th-century fortress found on the same estate. Both are located in South Queensferry, a town on the Firth of Forth, just northwest of Edinburgh. Guided tours showing off the posh abode’s art collection and exquisite furnishings have been suspended temporarily, but should return once repair works to the estate are completed and Covid-19 under control. Online: roseberyestates.co.uk

Other locations seen on screen include the town of Culross in Fife, and Inveraray Castle, found on the shores of Loch Fyne in western Scotland, along with the Aray Bridge leading up to it.

“Emily in Paris”: This Netflix production traces the ups and downs of an ambitious young woman from Chicago who gets hired to provide an American perspective to a French marketing firm. Fans of the wildly popular series starring Lily Collins are rejoicing— and likely already binge-watching— its second season, released on Dec. 22.

Iconic images from The City of Light are joined by the glamour of the French Riviera as Emily vacations with friends Mindy and Camille. With its bright red terrace overlooking the port, the Café Sénéquier in Saint-Tropez is easy to pick out. The Grand-Hôtel du Cap-Ferrat in Saint-Jean-Cap-Ferrat served as both a filming location and accommodation for some of the writers and crew.

“House of Gucci”: In this film based on a true story, Lady Gaga plays Patrizia Reggiani, a working-class young woman who sets her sights on geeky law student Maurizio Gucci, played by Adam Driver. Once they’re married, Reggiani urges Maurizio to resort to dirty tricks to gain control of his family’s luxury brands company. When Maurizio finds love elsewhere and demands a divorce, she hires a hit man to kill him. The film hit the cinemas on Nov. 24 and is expected to be available for streaming on Paramount+ as early as January 2022.

Some of the eye-popping properties include the Villa Balbiano, a 16th-century mansion on Lake Como which plays the home of Gucci family patriarch Aldo Gucci. Maurizio’s father Rodolfo Gucci’s home is portrayed by the Villa Necchi-Campiglio, located on Via Mozart in Milan. The property is nowadays a museum. Street and shopping scenes were shot on the via Condotti in Rome and the Quadrilatero della Moda in Milan. The ski resort town of Gressoney in Italy’s Aosta Valley stood in for St. Moritz. Maurizio’s assassination plays out in Milan’s famous Galleria Vittorio Emanuele.

“No Time to Die”: In the latest James Bond thriller, Bond doesn’t have long to enjoy life as a retiree in Jamaica. When an old CIA contact asks him for help, they embark on a mission to rescue a kidnapped scientist. The film is available for streaming on Amazon Prime Video.

Much of the movie is filmed in Italy, including the opening scenes of a car chase, which were shot in Matera. The bridge from which 007 jumps is the Madonna Della Stella Aqueduct, in the town of Gravina in Puglia. The real town of Sapri in Salerno province doubles for a fictional one named Civita Lucana. Other show-stealing locations include Norway’s Atlantic Ocean Road, the Faroe Islands and Aviemore, a town located in the Cairngorms National Park in Scotland.

“The Falcon and the Winter Soldier”: This six-episode miniseries produced by Marvel Studios follows up on what happens to two supporting characters under the new world order that emerged following the 2019 film Avenger’s: Endgame and is available on Disney+.

Much of the film is shot in Prague, which multi-tasks as a stand-in for locales in Tunisia, Latvia, Turkey, Poland, Germany, and Russia’s St. Petersburg. In Episode One, the Palác Živnostenské Banky on Na Příkopě street in the Old Town takes on the role of a luxury hotel during one of Winter Soldier’s flashbacks, and the Czech Ministry of Culture on Maltézské náměstí serves as the Gasel Bank in Switzerland during a robbery sequence. In Episode Three, the Troja Bridge stretching over the Vltava river is seen leading to the fictional island nation of Madripoor, the GRC Resettlement Camp in Riga is played by the Colloredo-Mansfeld Palace, and the supply depot in Vilnius is the Monastery of Saint Gabriel. In Episode Four, the street staircase in Riga is located on Thunovská street, the café is found in the Lucerna passage shopping gallery, the funeral ceremony takes place in a former wastewater treatment facility in Bubeneč that is nowadays an Eco-technical Museum, the jump from the balcony was filmed at the Prague National Theater, and the final scene was shot at Jungmann Square.