Bastogne area gears up for Battle of the Bulge remembrances 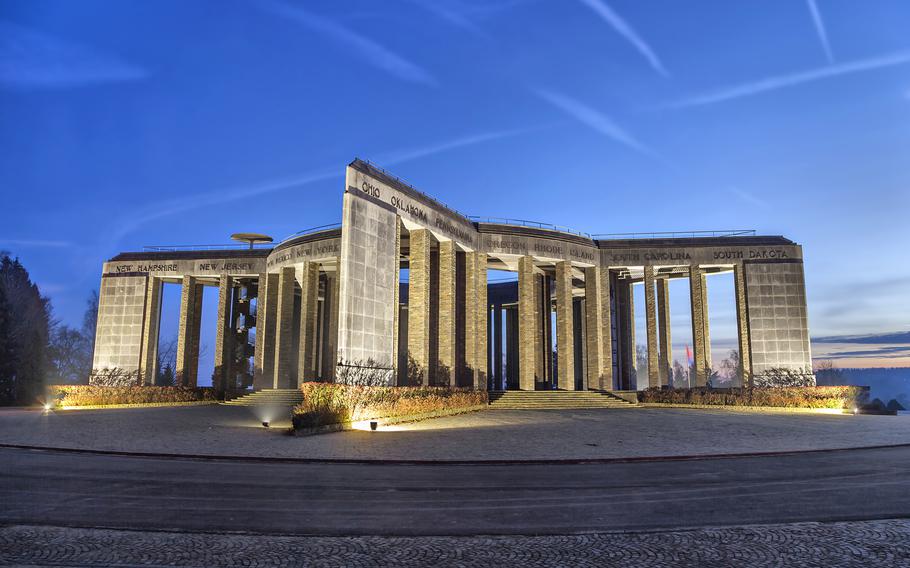 The Battle of the Bulge Memorial in Bastogne, Belgium, tells the story on its inner panels of the 76,890 Americans killed, wounded and missing at the battle that began in 1944. (iStock)

Nuts Weekend is a blanket term for the commemorations, reenactments and activities held annually to mark the anniversary of the Battle of the Bulge in Bastogne, Belgium, and its surrounding communities. In light of the surge in COVID-19 case numbers and the rise of the Omicron variant, traveling to attend the events that were on the agenda from Dec. 10-12 is bound to be getting a rethink, particularly among would-be participants residing outside Belgium. While missing out on those few activities that weren’t ultimately canceled will come as a blow for first-time visitors and die-hard pilgrims alike, the military history of the Ardennes region can be experienced throughout the year. Here are just a few of the places that make the area a source of boundless discovery for all those fascinated by U.S. military history.

Bastogne War Museum: A stop at this museum lies at the heart of itineraries exploring history of World War II in the Ardennes. The permanent exhibition tells the story of the Battle of the Bulge through the eyes of those who experienced it, using everyday objects, scenography and multi-media installations. Temporary exhibitions, which come about largely as the result of partnerships, loans and donations, explore the more obscure facets of the battles and the personal stories of those who fought or lived through the times as civilians. The museum is open year round, with the exception of an annual winter closing. This period falls between Jan. 10 and Feb. 24 in 2022. Online: bastognewarmuseum.be

Battle of the Bulge Memorial: What used to be known as the Mardasson Memorial is the Belgian people’s tribute to the American soldiers who died during the Battle of the Bulge. A soaring structure designed in the shape of a five-pointed star, the ten carved panels ringing the inside of the memorial tell the story of the battle in which 76,890 Americans were killed or wounded, or were marked missing. In December of 2020, the imposing structure was renamed in connection with its inclusion as the 31st federal monument of the American Battle Monuments Commission (ABMC). Online: tinyurl.com/2p9yy2r5

Bastogne Barracks: Formally known as the Royal Belgium Military Museum and Interpretation Centre of the Second World War, this space is always a hub of Nuts Weekend activities. Built in 1936, the barracks were used as a training center for the Hitler Youth and later on as the American headquarters for General Anthony McAuliffe as he commanded the 101st Airborne. Its Vehicle Restoration Center has given countless old armored vehicles new leases on life. The space, which offers free admission, is open weekends only in January and February and Wednesdays through Sundays for the remainder of the year. Online: tinyurl.com/2p97zmuf

Bois Jacques: This forest in the village of Foy bears the scars of its occupation by the American 101st Airborne Division during the frigid winter of 1944, with the outlines of the fox holes dug by the men of the “Easy Company” clearly visible. The site, a popular place of pilgrimage, is crossed by several trails and freely accessible. In 2022, the area is set to receive a 3D application designed to plunge the viewer into the heart of the fighting that of that terrible winter. The educational dimension of the commentary will be provided by YouTuber Benjamin Brillaud of Notabene, who is known for his storytelling skills. Online: tinyurl.com/k8s8y4j7

Ardennes American Cemetery: The final resting place for 5,162 Americans is laid out in the form of a Greek cross. The memorial itself consists of a stone structure with a massive American eagle on its façade. Inside is a chapel, three large wall maps and marble panels depicting combat and supply activities. Along the outside of the memorial, the names of 463 of the missing are inscribed on granite slabs. This cemetery is unique among all ABMC cemeteries for having served as the central identification point for the entire European Theater of Operations from the last days of the war until 1960. Online: abmc.gov/Ardennes

The December 44 Historical Museum- Le Gleize: This museum’s location in a village in the northern Ardennes is significant for the fact it was here that the advance of the spearhead of the German offensive led by the notorious Kampfgruppe Peiper was halted. The museum, created by two passionate historians back in 1989, safeguards the memory of those who perished in the efforts to defeat Hitler’s regime and sensitizes new generations to the causes and consequences of war. The museum’s collection of over 5000 authentic objects, arranged both chronologically and thematically, continues to grow. Equipment, uniforms and authentic vehicles, including a King Tiger tank that fought in the Battle of the Bulge, make up the museum’s permanent display. Online: december44.com

Schuman’s Eck National Liberation Memorial and Memorial Trail: Just north of the town of Nothum in Luxembourg is found a monument commemorating one of the bloodiest WWII battles fought in the country. On Dec. 30, 1944, the 26th American Infantry Division reached the Schumann Crossing, where they encountered stubborn resistance from the 9th German “Volksgrenadierdivision” entrenched in the woods. For two weeks, the front refused to budge, resulting in huge losses on both sides. The trail passes by the trenches from which they fought. Online: tinyurl.com/2p8pwje7

Those based in Germany wishing to immerse themselves in military history this weekend while remaining in country might wish to visit the temporary exhibition titled “Our Common Heritage.” This outdoor display of large panels set up in the form of albums offers the testimonies of citizens and soldiers from five distinct time periods: pre-WWI, WWI, the Interbellum, WWII, and post-WWII and the beginnings of European unification. The panels, which until recently stood on display next to the Battle of the Bulge Memorial, can be seen at the Schlossplatz in Saarbrücken, Germany through Jan. 31, 2022. For more on the exhibition, as well as a resource on major historical sites from both world wars in Belgium, Germany, Luxembourg and France, see landofmemory.eu/en.