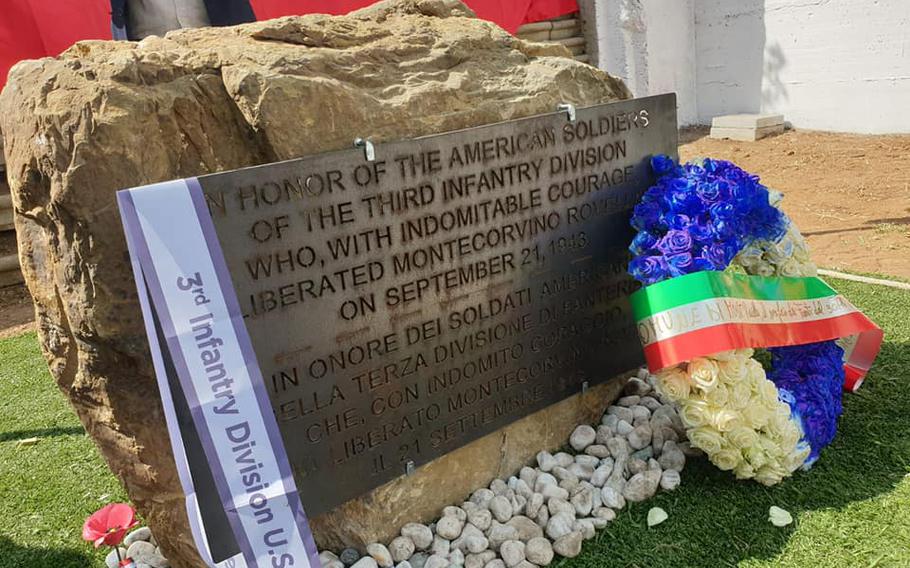 This “Rock” memorial was dedicated on Sept. 19, 2021, in St. Eustachio, Italy, on the 78th anniversary of the liberation of Montecorvino Rovella. The plaque says, “In honor of the American Soldiers of the Third Infantry division who, with indomitable courage, liberated Montecorvino Rovella on September 21, 1943.”  (uswarmemorials.org)

American War Memorials Overseas is a private organization that works to document, promote and offer support toward the care of the thousands of overseas gravesites and memorials that fall outside U.S. government auspices. The nonprofit entity cooperates with special interest groups, history clubs and other organizations at the local, national and international level to highlight the existence of cemetery plots, commemorative plaques and other forms of memorials honoring the actions of the U.S. military and the soldiers, Marines, airmen, sailors and others who fell in the process.

The organization works hard to maintain and grow a database currently listing 2,594 memorials at 1927 sites, the names of 27,395 individuals and 2,902 units worldwide. Hundreds of these sites dot European soil, the countries of our former allies and enemies alike. Not all memorials are as old as the deeds they commemorate, and through the tireless efforts of both U.S. and foreign citizens, veterans groups, local civic institutions and a host of others, markers continue to go up. The existence of such sites serves as a testament to the enduring respect afforded to the U.S. military past and present, along with those who serve.

Montecorvino Rovella, a town and comune in the province of Salerno in the Campania region of southwest Italy, dedicated a monument to its liberation by the soldiers of the 3rd Infantry Division, known as “Rock of the Marne,” on Sept. 19 of this year. A steel plaque engraved in both Italian and English and affixed to a cube-shaped rock reads “In honor of the American Soldiers of the Third Infantry division who, with indomitable courage, liberated Montecorvino Rovella on September 21, 1943.” The monument is located in a small park next to the St. Eustachio city square. The local newspaper, Salerno Today, reports of a related event, the inauguration of an exhibition about the U.S. Army Medical Department during the Second World War at the former conservatory of Santa Sofia. The exhibition contains a section about the “Operation Avalanche” landings at Salerno. Online: tinyurl.com/bc9j38p9

In 1917, due to a lack of suitable training facilities stateside, a contingent of some 500 Americans were sent to the town of Foggia, in southern Italy’s Apulia region, to learn military flying. Upon completion of their training, many of these Foggia graduates were transferred to the Western Front to fly with the American Expeditionary Force, while 75 remained in Italy under the command of Capt. Fiorello LaGuardia, who simultaneously held office as a Congressman from New York. The American pilots were attached to Italian bomber squadrons in order to gain experience in bombardment while bolstering their numbers. These missions marked the first combat bomber operations by members of the U.S. Army Air Service, and several airmen received Italy's highest decoration, the Medaglia di Oro, for their combat heroism. At the Foggia Military Airport, on the site of the old military airfield of Gino Lisa, a white marble column pays tribute to “the Foggiani,” and a brass plaque in the city’s cathedral honors the American aviators who fell at the Foggia Aviation School. Online: tinyurl.com/uaatmwfa

The B-24 “Lady Patricia” (42-51642) Crash Site Memorial sits at a height of 6725 feet, overlooking the Rhine Valley near Chur, in the town of Malix-Churwalden. Here, in the shadow of the Dreibündenstein Peak, a cut granite stone with a brass plaque recalls the B-24J Bomber “Lady Patricia” that crashed here on Nov. 6, 1944. The plane belonging to the 745th Bomber Squadron, 456th Bomber Group “Steed’s Flying Colts,” 15th Air Force, left Stornara Air Base, Italy to bomb enemy facilities in Munich, Germany. On return from the mission, engine trouble forced the pilot, 2LT Doyle Smith, to crash land. Smith was killed, but the crew survived and was interned in Switzerland until the end of WWII. Online: tinyurl.com/vshmk952

The B17 Museum in Utzenstorf, a partner of American War Memorials Overseas, exhibits the original clothing and personal items of plane crews that surfaced after the war. The owner of this privately owned museum, Rolf Zaugg, maintains ties with veterans and the descendants of the crews of WWII bombers and fighter jets. Zaugg is constantly on the lookout for items pertaining to aircraft emergency landings, crashes, or internees in Switzerland during the war. Online: b17museum.ch

On Turk’s Row in Chelsea, London, a plaque notes the site of a bombing incident during WWII. On the wall of the entrance gate to Cavalry Square, the white stone monument recalls the presence of the large apartment blocks known as Sloane Court and Sloane Court East, in use by the 30th Chemical Processing Company of the U.S. Army. On July 3, 1944, a V-1 Flying Bomb fell in the street and destroyed the surrounding housing units. Among the casualties were 74 American service personnel, including several women. Online: tinyurl.com/4d4zpfxu

St. Paul's Cathedral in London houses The American Memorial Chapel, which contains the names of the more than 28,000 Americans who gave their lives while traveling to or stationed in the U.K. during WWII. The tablet was unveiled by H.M. Queen Elizabeth II on Nov. 26, 1958 in the presence of Richard M. Nixon, Vice President of the U.S.A. Online: tinyurl.com/xm43a6f4

In the Puckpool Park in Ryde, on the Isle of Wight, a stainless steel plaque commemorates the contributions of members of the U.S. Coast Guard toward D-Day operations. The plaque, which contains the images of five coast guard ships, notes that U.S.C.G. personnel crewed 97 British and American attack transports and landing ships and provided the sole D-Day Maritime Rescue Service, often under the severest fire, saving the lives of 1,438 Allied Servicemen in the Normandy Assault on June 6, 1944. Online: tinyurl.com/y22appze