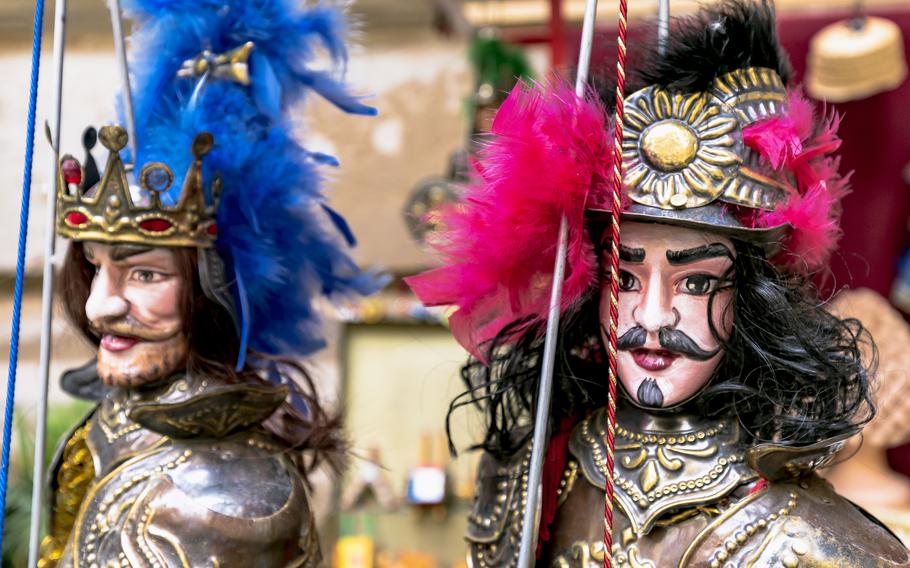 Puppet shows are still in vogue in several corners of Europe. (iStock)

Attending some kind of a theatrical performance has long been considered an essential part of the European experience. But not all theater is highbrow. The actors of one school of theater in particular can often be astonishingly vicious with one another, with sword fights, beatings and other acts of violence the norm. But not to worry, as these tiny players tend to bounce back at will. Not only are these characters remarkably resilient; they are also used to playing to diverse audiences. Illiterate paupers, devout churchgoers, erudites and royalty have all enjoyed various forms of puppet shows through the ages. The popularity of this genre of entertainment has waxed and waned, but in several places, these traditions are thriving.

Since 2008, a type of puppet theatre known as the Opera dei Pupi has been on the UNESCO Representative List of the Intangible Cultural Heritage of Humanity. Performances based on medieval acts of chivalry, Renaissance poetry, the lives of bandits and saints and other tales gained popularity in Sicily at the beginning of the 19th century and enjoyed great success among the working classes. Palermo and Catania both emerged as hubs of puppetry, but with significant differences in operating techniques, backdrops and the puppets themselves.

Catania’s Museo e Teatro dei Pupi Fratelli Napoli sheds light on the traditions of Catanese puppetry over the past century. In 1921, Gaetano Napoli founded a puppet company that is currently in the hands of the family’s fourth generation. Their former workshop in the city’s historical center displays an extensive collection of puppets, equipment and props dating back to the late 19th century. The Antica Bottega is the place in which new puppets are birthed. The company's itinerant puppet shows are performed on an easily transportable stage that can be set up virtually anywhere and keep the puppeteers in full view of the audience. Online: en.fratellinapoli.it

Palermo boasts a handful of puppet theaters, amongst them the Figli D'Arte Cuticchios, in the hands of the same family for several generations. Knowledge of Italian helps, but is not essential, to the enjoyment of one of their action-packed shows at which children are invited to sit in the front and the audience is treated to a backstage tour after the show. Performances last for approximately one hour. The theater’s extensive repertoire includes classics, operas and cunto, a single-voice narration of the epics of the paladins of France, the knights of Charlemagne’s court. Upcoming performances include “The enchantment of Astolfo by the sorceress Alcina” at 6:30 p.m. Nov. 6-7 and 13-14. Entry costs 10 euros for adults and 5 euros for children. Online: figlidartecuticchio.com

The Real Bosco di Capodimonte, a sprawling urban park that once served as a royal hunting ground, is home to a seasonal puppet theater. The hero of the day here is Pulcinella, easily recognizable by his large, crooked nose, humpback, pot belly and gangly legs. This traditional Neapolitan character originating from the commedia dell'arte of the 17th century appears in two guises: that of an aggressive schemer of great intelligence and a crass, ignorant country bumpkin. Shows are geared to children, but adults will find them equally entertaining. Last summer’s shows took place in June and July; entry was free, but preregistration was essential.

A production of ”The Little Prince” by Antoine de Saint-Exupéry involving not only puppets but live actors, masks and other visual elements is offered at the Museum and Real Bosco di Capodimonte at 10:30 a.m. on Oct. 30-31 and Nov. 6-7. This classic children’s tale transports young viewers into a fantastical world of planets, asteroids and volcanoes. Performances are free, but preregistration is essential. Write to info.musicapodimonte@libero.it with the full name of the attending children and the responsible adult and his or her mobile phone number. The show takes place under the arcades of the museum’s courtyard and will be canceled in the case of adverse weather conditions. Online: tinyurl.com/7cdc43mk

Germany’s best-known puppet theater is found in Bavaria. The Augsburger Puppenkiste, or Augsburg Puppet Chest, is a marionette theater in the heart of the city’s historical center. Renowned for its adaptations of dramas and fairy tales, its repertoire is beloved by children and adults alike, and various television series have added to its fame. Another popular part of the theater’s repertoire is a pantomime show that typically premieres on New Year’s Eve and runs for the next six months.

While COVID-19 regulations have limited performances, they have not shut down operations entirely. Upcoming performances include “The Ring of the Nibelungen” and “Rumpelstilzchen.” The puppet theater museum is open from 2 p.m.-6 p.m. Thursdays through Sundays. Online: augsburger-puppenkiste.de