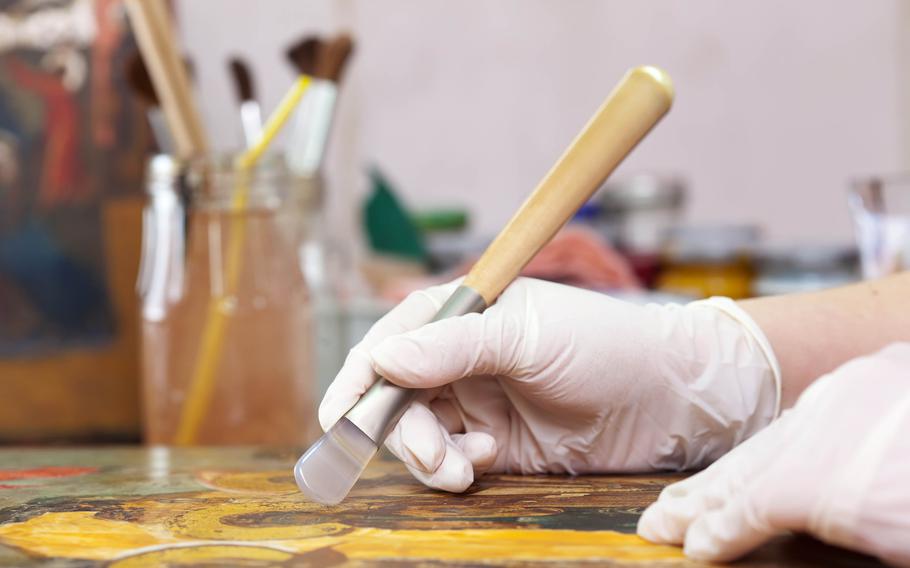 Some painting restorations, for various reasons, are more famous than others.  (iStock)

The restoration of an old painting, when properly carried out, can reveal startling new aspects of a familiar work of art, and at the same time, raise many questions. Was it the original artist who altered the image, one of his or her students or contemporaries, or an altogether unknown individual? Was the picture changed for a particular reason? As one ponders such things, one can simultaneously appreciate the beauty of the freshly restored painting. Here’s a look at a trio of restorations that have made waves in Europe over the past few years.

The Gemäldegalerie Alte Meister, regarded as one of Germany’s leading art museums, is showing a temporary exhibition titled "Johannes Vermeer. On reflection" through Jan. 22, 2022. Ten of the 36 surviving paintings accredited to Vermeer have been assembled from collections around the world, including the Rijksmuseum of Amsterdam and the National Gallery of Art in Washington, D.C.

The centerpiece of the exhibition is "Girl Reading a Letter at an Open Window," a restoration completed on Aug. 26 of this year. The well-known painting has been returned to the condition in which it left Vermeer’s studio over two and a half centuries ago.

The restoration of the painting, part of the Gemäldegalerie’s permanent collection, was carried out only after careful deliberation. An X-ray taken of the painting in 1979 revealed a fully overpainted picture-within-a-picture of a nude Cupid in the upper right hand wall’s background. Although many academics had assumed that Vermeer, unhappy with the composition, had painted over the Cupid painting himself, a research project launched in 2017 to analyze many attributes of the image, including the composition of the paint, ascertained that the change was made several decades later. Further study attributed the brushstrokes in the Cupid to Vermeer’s hand.

Given the convincing evidence of a third-party intervention, the painting was restored to reveal a standing Cupid with a bow and arrows, treading upon two masks, which serve as a symbol of pretense. Cupid’s presence adds to the painting’s message of true love conquering deception and hypocrisy.

The Ghent Altarpiece, also known as the Adoration of the Mystic Lamb, is a 15th-century altarpiece in St. Bavo's Cathedral in Ghent, Belgium. The work, attributed to brothers Hubert and Jan van Eyck, consists of 18 panels and is considered a masterpiece of European art.

The central panel of the lower register, which depicts a large gathering of saints, sinners, clergy and soldiers attending an adoration of the Lamb of God, has been undergoing a multi-phased renovation since 2012. In the second phase of the project, restorers discovered evidence of a 16th-century alteration of the lamb’s face. Stripping away the overpaint revealed the lamb’s intense gaze and large frontal eyes, a look termed “startlingly humanoid” by Smithsonian Magazine. The lamb’s disturbing new appearance made headlines around the world and created a huge buzz on social media.

The altarpiece remains on view at St. Bavo's Cathedral, and tickets are available on site. It is also possible to book online tickets in advance, which offer an enhanced encounter with the cathedral’s crypt through Augmented Reality (AR). Unlike Virtual Reality (VR), AR technology adds extra, three-dimensional figures that merge with the physical surroundings. Tours lasting either 40 or 60 minutes are available, and both include a face-to-face encounter with the altarpiece. Adult tickets go for 16 euros. Online: tinyurl.com/2nhebdju

Not much was ever heard of Borja, a town of less than 5,000 souls in northeastern Spain, until would-be artist Cecilia Giménez turned her hand to the restoration of a painting in the Santuario de Misericordia, a small church nestled in the foothills of the nearby mountains.

In 2012, a devout elderly parishioner, alarmed at the poor condition of a painting on the church’s wall, set to work. Diligently blocking over a face of Christ rendered by an artist nearly a century previously, the results of her good-faith restoration fell far short of spectacular. A local journalist poked fun at her work, a story that was quickly picked up by major news networks. The painting originally titled “Ecce Homo” soon gained a new nickname: “Ecce Mono,” or ”Behold the Monkey.”

Monkey Christ, clumsy and amateurish as it was, turned out to be a boon for the small town. Visitors continue to flock to the town to take in the image that enjoyed such a generous run of viral fame and scoop up T-shirts, magnets and other merch. The modest two-euro entry fee includes a visit to an interpretation center dedicated to the original artist, its restorer and other restoration tales. Perhaps best of all, the funds raised help to support a church-affiliated nursing home. Online: borja.es/25523-2