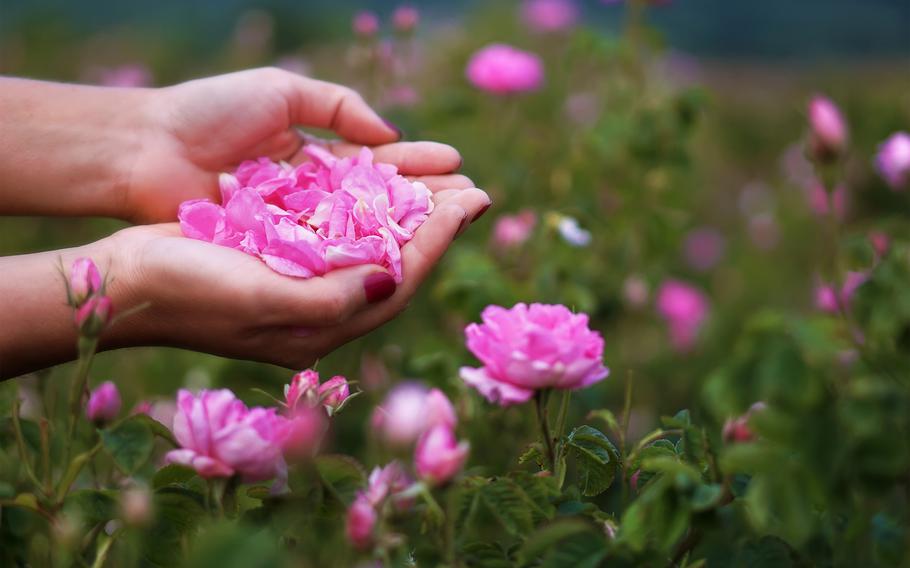 Pink-petaled Damask roses that grow in Bulgaria's Balkan Mountains are harvested and made into rose oil. (iStock)

For many travelers, souvenir shopping is half the fun of any trip, and even those who don’t particularly enjoy it know it can sometimes be inadvisable to return to one’s beloved empty-handed. While most are familiar with Europe’s priciest must-have gifts from Norwegian wool sweaters to Italian leather handbags, a constellation of scents, spices and trinkets make the process of picking up useful and unique items for friends and family back home a joyful pursuit.

Austria: The country’s southeastern region of Styria is known for its pumpkin seed oil, a product which is consumed and used as a beauty product. A substance known for centuries, commercial production only took off in the 1950s, when a hybrid pumpkin with a softer shell and hull-less seeds simplified production. The cold-pressed oil has a nutty taste that makes it a winner in salad dressings, desserts, and as the final refining touch to soups and other dishes. High in antioxidants, vitamins and minerals, some studies suggest the oil can help improve an enlarged prostate or overactive bladder. When touring the state of Syria, sample local specialties such as scrambled eggs with pumpkin seeds and oil or Käferbohnen, beans tossed with an apple cider vinegar and pumpkin seed oil vinaigrette. For outing ideas, see https://tinyurl.com/bpuuwzy8

Bulgaria: The world’s largest producer of organic rose and lavender oils is the place to pick up these highly prized fragrances. Across a 90-mile strip of land in the Balkan Mountains known as Rose Valley, pink-petaled Damask roses that yield an oil likened to liquid gold bloom between May and June. Some 60,000 roses are needed to produce a single ounce of rose oil. On the first weekend of June each year, the town of Kazanlak holds a rose festival with traditional rose-picking, folk dancing and stalls selling rose soaps, cakes, wine and rakia, a type of fruit brandy.

Denmark: It’s not just Danish children who enjoy a tasty chocolate sandwich. Here, one is likely to be made of not your usual chocolate hazelnut spread but Pålægschokolade, ultra-thin chocolate plates meant to be placed atop lightly buttered bread. Both dark rye and white bread make great underpinnings to this sweet treat Danes have been enjoying since 1960s. Light and dark chocolate versions are available, with the former the more common of the two. Other variations on the theme include the Netherlands’ Vlokken, a wavy chocolate flake, or hagelslag, known in the U.S. as jimmies or sprinkles.

France: While it’s generally easy to find a weekly market in most towns of any size, if it’s not market day, make way to an epicerie, a shop specializing in spices. Opt for fleur de sel, the a type of sea salt appreciated for a crisp texture thanks to the shape of its crystals; fines herbes, a mix of tarragon, chives, chervil and parsley; herbes de Provence, a mix of marjoram, rosemary, thyme, oregano and lavender; or bouquets garni, bundles of sage, parsley, thyme and bay leaf tied together with string. A pain d’épices spice blend of cinnamon, ginger, anise, cardamom, cloves, mace, nutmeg, coriander, anise seeds and white pepper helps to faithfully recreate French gingerbread cake and bread recipes.

Sicily: The Mediterranean island produces the world’s most-prized variety of the pistachio, the pistacchio verde di Bronte. The green nut thrives on the slopes of Mt. Etna and takes its name from the central point of its cultivation. Pistachio trees produce crops only once every second year, and in Sicily, the harvest takes place in odd-numbered years. In addition to a flavor of gelato or the main ingredient in countless sweet treats from the bakery, pistachios can be enjoyed in the form of savory pesto sauces. To truly understand the nut’s versatility, make way to Bronte’s annual “Sagra del pistacchio di Bronte,” held over two long weekends in late September and early October.

Spain: The essential ingredient in any good paella is saffron, and the country’s biggest producer of the prized spice is the La Mancha region. Saffron comes from a purple crocus that blooms in autumn. Each flower yields only three threads that must be plucked and dried by hand, a labor-intensive process that explains the product’s hefty price tag. The small town of Consuegra, about an hour’s drive from Madrid, is the center of saffron production. Its annual Rose of Saffron festival, held on the last weekend of October each year, is a food festival enlivened by dancing, parades and competitions to see who can harvest the fastest.

Turkey: Black cumin oil, also known as black seed oil or kalonji, has a long history of culinary and medicinal use in Egypt, Tunisia and other parts of the world. It has recently gained a following as a health supplement in Europe and the USA, as it is believed to help reduce high blood pressure and high cholesterol levels. Pick some up at Istanbul’s Spice Bazaar, where fragrant and colorful stalls burst with spices both familiar and exotic. Other things to take home from here include sumac, the dried pepper flakes known as Pul Biber and goji berries. Shea butter soap, honey and propolis can also be found here, oftentimes for only a fraction of what you’d expect to pay back home.