Twist and shout through Europe’s most scenic drives 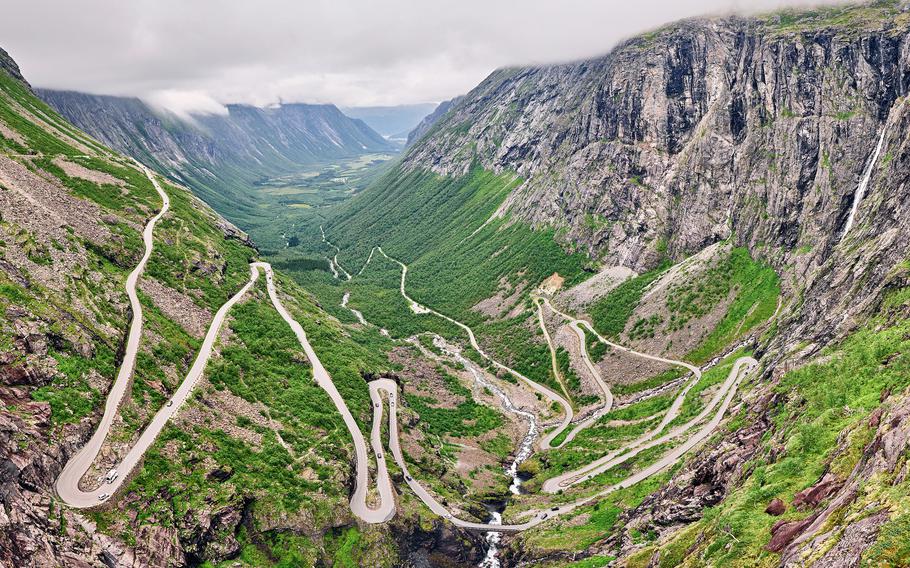 Norway's Trollstigen Mountain Road offers fantastic mountain scenery, and each of its 11 hairpin turns has its own name. (iStock)

In times when flights are complicated and the distance between us is not exactly a bad thing, those based in Europe might be thinking a road trip is the way to go. Along many mountainous or coastal highways, the scenery and driving experience can be a vacation highlight in and of itself. Of course, zipping across borders can get complicated quickly nowadays, so inform yourself thoroughly about any COVID-19 restrictions presently in place in any country you plan to traverse, however briefly. Here are just a few stretches where the sights come fast and drivers will have to work extra hard not to become distracted.

Austria: The Grossglockner High Alpine Road is a 30-mile mountain pass between the towns of Fusch-Ferleiten in Salzburg and Carinthia’s Heiligenblut. The hugely popular scenic route cuts through the heart of the High Tauern National Park. During the summer months, the driver and passengers will delight over blooming meadows, green pastures, hills, waterfalls and the Grossglockner, the country’s highest peak. With luck, one might hear the shrill whistle of an ever-alert marmot or catch sight of a golden eagle soaring high above. A highlight of the journey is a stop at the Kaiser-Franz-Josefs-Höhe, which offers a visitor’s center, observation tower and dining options. The road is open to traffic from early May through late October only. Online: tinyurl.com/kd77ywnb

Crete: This rugged Greek island offers no end of fabulous driving itineraries, many leading to unspoiled beaches, particularly on the island’s southern coast. For those up to a true driving challenge, the website dangerousroads.org characterizes the road between Kallikratis and Kapsodasos as “scary, bumpy, small and empty.” This twisting, turning road is only seven miles long, yet manages to deliver 27 hairpin turns between sea level and Kalikratis, a small village at the foot of the White Mountains. One 1.5-mile section is particularly hairy, with seven hairpin turns along a nearly 9% gradient. The road is only accessible during the warm months of the year. Online: tinyurl.com/9k7r9few

Germany: For superlative Alpine views, head toward the Berchtesgadener Land in the southeastern tip of the country, where the Rossfeld Panorama Road runs across a high plateau and cuts across Austrian territory for a mile or so. The road, located at a height of 5250 feet, offers breathtaking views of mountain peaks and the depths of the Salzach Valley over 3,000 feet below. There are two routes to choose from. The southern variant leads from Klaushöhe to Obersalzberg and passes the starting point to a hike to the Eagle’s Nest and Germany's oldest distillery. The northern route begins in Berchtesgaden-Oberau and leads past Pechhäusl to the north toll station. The road’s apex connects the two routes across a high plateau. Those traveling on public transportation can take bus RVO 848 from Berchtesgaden to the north toll station. The toll is 8.50 euros per car, passengers included. The route is passable throughout the year. Online: rossfeldpanoramastrasse.de/en

Italy: The 35-mile Amalfi Coast Road clings precariously to the cliffs above the Tyrrhenian Sea as it winds its way between Sorrento and Amalfi. The route passes by Positano and its jumble of pastel houses seemingly stacked atop one another and the sophisticated resort town of Amalfi. Highlights of this tour include the drive past the resort town of Praiano with its pretty domed church and through the Vallone del Furore, a steep gorge. Should time allow, the 12-mile side trip to breathtaking Ravello is well worth the detour.

Ireland: The Wild Atlantic Way is the term for the 1,600 mile long coastal road hugging Ireland’s western and southern coastline from Donegal to West Cork. Although any stretch offers gorgeous coastline and an authentic peek at rural life, the part known as Atlantic Drive in County Mayo is considered one of the jewels in the crown. Two 12-mile loops pass by Iron Age forts, pristine beaches and castle ruins. The drive up to Minaun Heights affords sweeping, 360-degree vistas and a view to Achill Island. Online: tinyurl.com/3h8cunbf

Norway: The Trollstigen Mountain Road, opened in 1939, is regarded as a masterpiece of engineering. Norway’s most famous tourist road links the towns of Åndalsnes in Rauma and the village of Valldal in Trollstigen and offers fantastic mountain scenery en route. Drivers delight at its 9% incline and 11 hairpin turns, each with its own name. The Stigfossen waterfall is an added attraction. The road usually opens at the end of May and closes in late October. Online: fjordnorway.com/top-attractions/trollstigen

Romania: The Transfăgărășean is a 56-mile highway passing between the village of Bascov and the DN1 highway leading to the city of Sibiu. Along its way, it passes between the Moldoveanu and Negoiu, Romania’s two highest peaks. Construction of this strategic military route took place in the early 1970s under the rule of Nicolae Ceaușescu as a response to the 1968 invasion of Czechoslovakia by the Soviet Union. Many lives were lost in the building process, much of which was carried out by inexperienced soldiers. Reaching altitudes of 6,699 feet, the road is notorious for its hairpin turns, long S-curves, and sharp descents. Tunnels and viaducts add to its visual appeal. Along the southern stretch is found Poenari Castle, residence of Vlad the Impaler, the inspiration for Bram Stoker's Count Dracula character. The road’s fame grew after it was spotlighted on the British auto show Top Gear. The road is usually open between late June and late October. Online: tinyurl.com/23zpr3y7